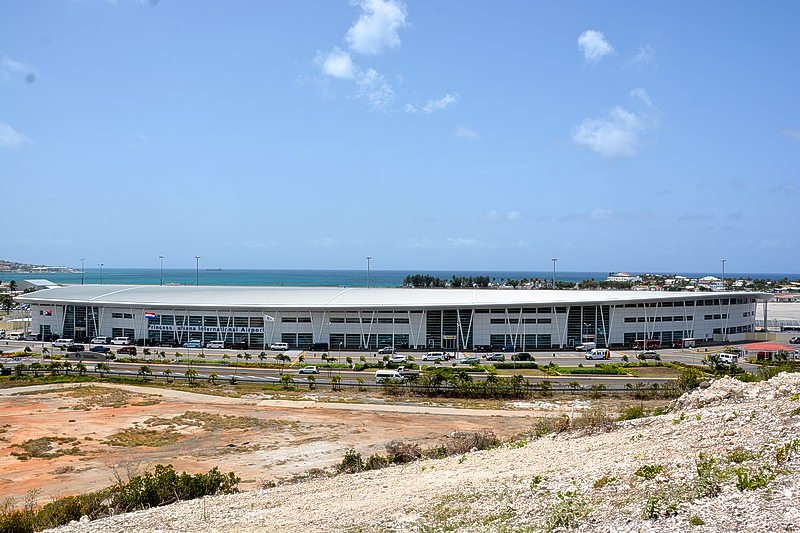 PHILIPSBURG–Finance Minister Richard Gibson says Princess Juliana International Airport and Port St. Maarten (Harbour) should pay a “departure tax” to government as is the case in other countries.

He suggested an amount between NAf.10 to NAf. 12 per person should be contributed to government’s coffers. Gibson told reporters at the live Council of Ministers press briefing on Wednesday that he has been meeting with the management of the government-owned companies intensively over the past weeks on this issue and he will continue to do so in the weeks to come.

According to the Minister, the system in the past allowed the airport and port to charge a departure fee without government’s permission. He called this a “mistake,” which he said has to be corrected.

The collection of a fee is based on a regulation and not based on efforts to produce profits, which he contends results in “inefficiencies” at the facility. “When I look in the region I can’t find one country that does not charge a departure tax that goes into the coffers of government. This is the reason why (the St. Maarten – Ed.) government always lives hands-to-mouth because what government should receive in income, it is not receiving – it goes to build up the harbour and the airport year after year – and the time has come for that to change because it is affecting government’s operation. The services that government has to render, it can’t render because it has to cut, cut, cut…”

The Port, charges US $7 per tourist, and while the harbour has facilities, government has “ten times more facilities” including roads and general infrastructure. “They (the harbour – Ed.) have right to charge, government has the same right. This is a mistake made years ago and the time has come to correct it.”

He said the two facilities have argued that they cannot charge this tax. Gibson noted, however, that they will or have to pay it themselves, seek means to generate it or deduct it from what they are already receiving, which he said should have been in government’s hands in the first place. “This is the process that we have started and if we succeed, it will require a law passed by Parliament, but theoretically NAf. 10 or 12 would produce already NAf. 9 million in additional revenue for government.”

During his address to the media Wednesday, Gibson also alluded to integrity reports conducted in the past, which stated that it appeared as though government-owned companies were operating as if they were “a government in the government.” Against this backdrop, recommendations were made that government has to reassert itself and regain control on what is going on in government-owned companies, a pledge he said the current administration has made to follow through on.

According to the Minister, in the past government-owned companies, in planning and preparing their budget, first thought of “all the bells and whistles” that they wanted and after securing their desires they then checked to determine what remained as dividends for the shareholder. The situation should be reversed and the duty of a company should be to manage its resources efficiently and to annually produce profits which have to be shared with government.

“One of the things we are doing is talking about what is a fair return to government. Once that fair return is established then they will be asked to start rethinking the things they did in the past. Not focus on all the bells and whistles, but focus on what shares should be dedicated to shares and profit and take the steps to generate those profits…”