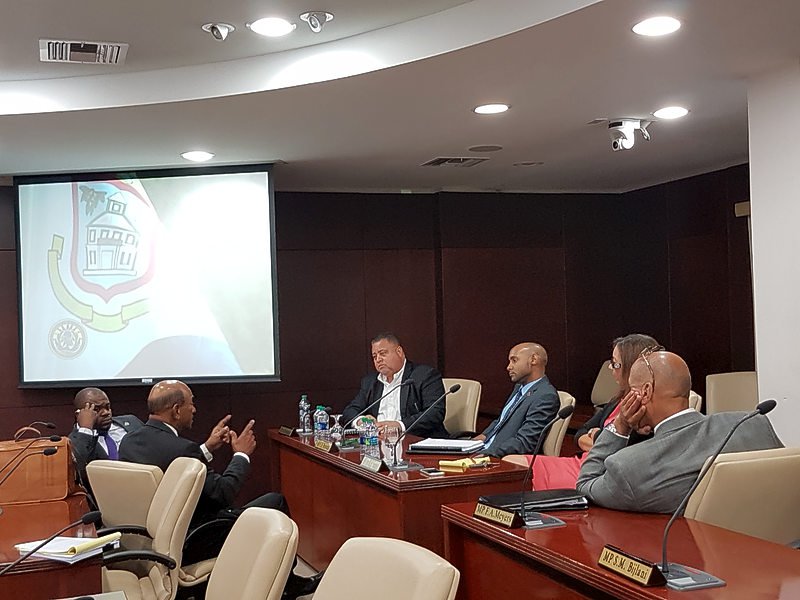 PHILIPSBURG–The loss of calls by two major cruise lines and the skyrocketing growth of online shopping have been listed as major contributors to the loss of Government revenues, in particular turnover tax (ToT). The loss of the ships amounts to NAf. 90 million.

Finance Minister Richard Gibson informed the Central Committee of Parliament about the losses when he tabled the draft 2017 budget on Monday morning, but he stopped short of indicating how Government plans to lure cruise ships back and to halt the chipping away of ToT payments by online shopping.

Concerns about the boosting of the economy and tourism were raised by several Members of Parliament (MPs). United St. Maarten Party (US Party) MP Frans Richardson was very stern on the topic saying the tourism budget must be increased.

Richardson declared that the 2018 budget would not have his support when it comes up for debate unless it “reflects reality and maturity.” He is determined “not to be a rubber stamp” for that budget and emphasised his position further: “I am dead serious.”
Fellow US Party MP Silvio Matser was more candid on the need to boost tourism, the country’s main economic generator. He said: “We are killing the chicken. … Eventually, when the chicken is dead, we will all starve.” He called on Gibson to outline what is pending to make the country more investor-friendly.

The budget before Parliament has been described by Gibson as “conservative, realistic and balanced.” It is on the same level in income and expenses as the current budget, but with a price indexation factor of 1.1 per cent. That brought the budget to some NAf. 478.1 million before the second debt servicing payment of NAf. 20 million was subtracted.

The NAf. 20 million payment is based on the instruction of the Kingdom Government to the St. Maarten Government to have revenues to cover the debt to the social funds piled up from 2010 to 2014. With this subtraction, the draft budget is now NAf. 458 million.

Also lessening the burden on the budget is an agreement signed between the Ministry of Finance, the General Pension Fund APS and the unions to make the pension fund “sustainable in the long run.” This step was called for in the instruction from the Kingdom Government to get the country’s financial house in order.

The Council of Ministers has signed off on the framework for a national health insurance. This ordinance is “in the pipeline” to Parliament and is part of the instruction issued by The Hague.

The draft budget, therefore, has “little room for new policies,” said Gibson. Any new policy or project would have to come with a proposal for a new source of income to cover its execution.

While there is little room for new policies, it was not necessary to enforce any cuts this year. This has led to the restoration of full subsidies to foundations and organisations. Also an allocation was made for NAf. 1 million for the start-up of a law school for the country.

Like the 2016 budget, this draft budget was also sent to the Committee for Financial Supervision CFT for review. The difference is that the draft budget was sent to CFT prior to Monday’s sitting of the legislature. This has resulted in the preparation of a budget amendment that will be tabled in Parliament soon.

2016
Keeping the current 2016 budget balanced and within the stipulations of the Law on Temporary Financial Supervision has been “extremely challenging due to the steep decline in income” related to the loss of cruise calls and the online buying. The impact, Gibson said, transcends the loss of Government revenue. It has had implications for the turnover of businesses and unemployment numbers.

To keep on track, Government has been limiting spending, halting the hiring of consultants or cutting back on those now on contract, and rejecting any new expenditure not covered in the budget.

The current budget year will end with a shortfall of some NAf. 25 million in revenue. “This should not surprise anyone” considering the loss of the ships and the online buying, said Gibson. However, Government is looking at receiving additional revenue for the year not to end with a deficit.

IT, training allocations
Investment must be made in improving Government’s information technology (IT) network and platform as well as in upgrading the Tax Department and training personnel, said Gibson. This comes after attempts to get assistance from the Netherlands failed due to prohibitive cost and assistance being tagged by the Dutch to unrelated items they want to pursue.

If no investments are made, “we will continue on a downward spiral that will lead to disaster,” he said. To stop the spiral, allocations were made for those three key areas both in the capital expenditure budget and the current account.

St. Maarten will not pursue its upgrading on its own. The country’s recent membership in the Caribbean Regional Technical Assistance Centre Cartac will be a vehicle for progress. This NAf. 100,000 annual membership will give the country access to assistance from the International Monetary Fund-affiliated organisation.

United People’s (UP) party MP Tamara Leonard questioned whether the allocation is only for the Finance Ministry or will be spread out to benefit all seven ministries. She also inquired about the stated increase in stamp duties and the effect on the overall cost of doing business.

Investments
In the sphere of general investment, Government intends to approach CFT again for approval to contract a loan for capital investments. A similar request was rejected this year.
The country has had three years of no loans for investment projects and for that reason the draft budget has some NAf. 58 million projected for capital expenditures “to make up for 2015 and 2016,” said the minister.

Crumbling infrastructure
Utilities company GEBE is “unable to keep the lights on and cool the rooms of tourists,” the Minister told Parliament.

The traffic moving at the pace of molasses also affects the economy. This is a threat that could divert tourists to other competing destinations, he said.

The telephone system is “not up to modern-day standards” while the price for calls is expensive.

The move by major resorts to all-inclusive properties is “depressing businesses” that feed off of resort guests.

A decline in foreign investment locally, as has been the trend internationally, has also been noted by the minister.

“We are not the only game in town. … Now many are doing a better job. … We have to diversify now,” Gibson said, calling the Pearl of China project for Belair Beach “a fall-back opportunity” for the country. The resort and international trading centre is an opportunity the country should not allow to pass by. “We need to carpe diem this opportunity.”

Questions
Several MPs posed questions ranging from tourism to health care. These questions will be answered by the responsible Ministers starting at 10:00am today, Tuesday, when the meeting resumes in Parliament House.

UP leader MP Theo Heyliger asked for Government’s plan to get back the cruise and stay-over visitors, why the tourism budget has not been increased and what are the marketing plans for the country.

Accountability of foundations receiving subsidies from Government was queried by UP Parliamentarian Claret Connor.

Whether there is a job freeze and if there is any structural income initiative were the concerns from National Alliance (NA) MP Ardwell Irion.

MP Christophe Emmanuel (NA) inquired about the possibility of a grace period for tax payments especially for small businesses.

The presentation of the budget in English was once again raised by MPs. Government will present an English translation of some parts of the Dutch-language draft budget document, but translation should be the responsibility of Parliament, Gibson said. Heyliger objected, saying the budget was from Government and it was a matter of transparency.