Home Local News Gibson is against raising taxes, believes taxes should be reduced 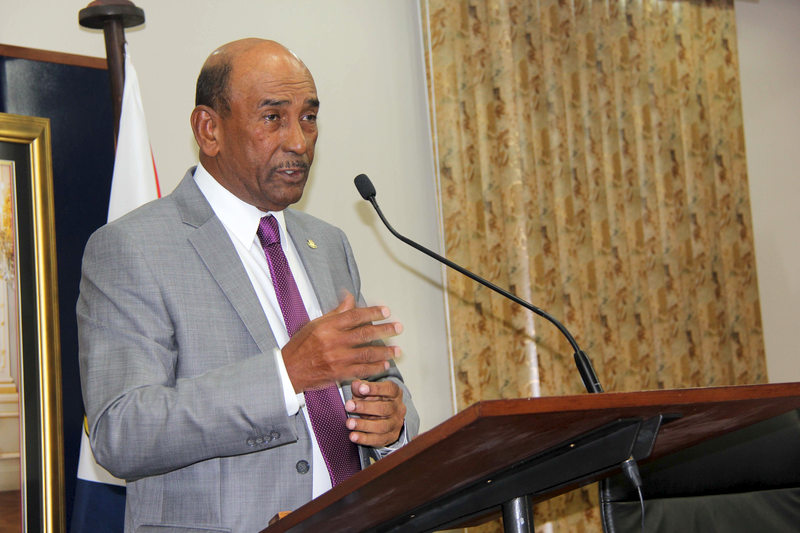 ~ Taxing online purchases not under consideration ~
PHILIPSBURG–Finance Minister Richard Gibson says he is against increasing taxes and in fact believes that taxes should be reduced.

Gibson said that, contrary to some media reports, a six per cent Turnover Tax (ToT) was not being imposed or even considered for online purchases.
Gibson reminded about his move to withdraw the National Ordinance to increase the motor vehicle tax, a proposal from the former Government, shortly after he entered office. That ordinance was an attempt to raise funds to generate additional income to balance the budget, but Gibson believed other areas could be used to generate more income.
“Taxes are already too high and I do not believe, and it is not my intention to raise taxes in any form,” Gibson said, recalling statements he had made in the past when asked whether he planned to raise taxes.
“This seems to have been forgotten by a lot of people – the fact that I believe that taxes should not be raised. To the contrary, I believe that taxes should be reduced, but this does not tie my hands, feet and mouth from talking about all possibilities that there are,” he said.
Gibson said he had held talks with the Director of Princess Juliana International Airport SXM regarding a four-cents-per-kilo charge on goods coming into St. Maarten that SXM Airport wanted to impose on persons who are renting spaces at the new cargo facility being built. He said the Airport did not have facilities such as boats on which it transported goods, “so why charge per kilo for goods being transported to St. Maarten?”
Gibson said he had stated to the Airport director during his discussion with him that this charge could be interpreted as an import duty. Gibson said he had made a comparison that as the Tax Department and Finance Ministry are the ones that can impose import duties, if Government had been thinking about charging import duties, it would clash with what the Airport was planning to do.
“To avoid this, I told them to seek another path other than charging for goods coming into the Airport,” he said.
Safe Cargo Services revealed to The Daily Herald last month that the Airporthad proposed an increase in rent per square metre as well as an air cargo tonnage fee of four cents per kilo for the use of its new cargo facility. “The proposal used the methodology of revenue-ton-kilometres which no other airport in the region uses. The airport expects tenants in the new cargo facility to pay two fees for the same space they are leasing. This is totally illogical,” Safe Cargo Services had stated.
Gibson said the news reports that he had been considering charging ToT on imports was against his philosophy to not increase taxes. He said the media reports had resulted in a lot of discussion on the matter. He said too that he had misspoken when he mentioned a six per cent ToT in making his comparison, as ToT in St. Maarten currently stands at five per cent.

Source: Daily Herald
Gibson is against raising taxes, believes taxes should be reduced