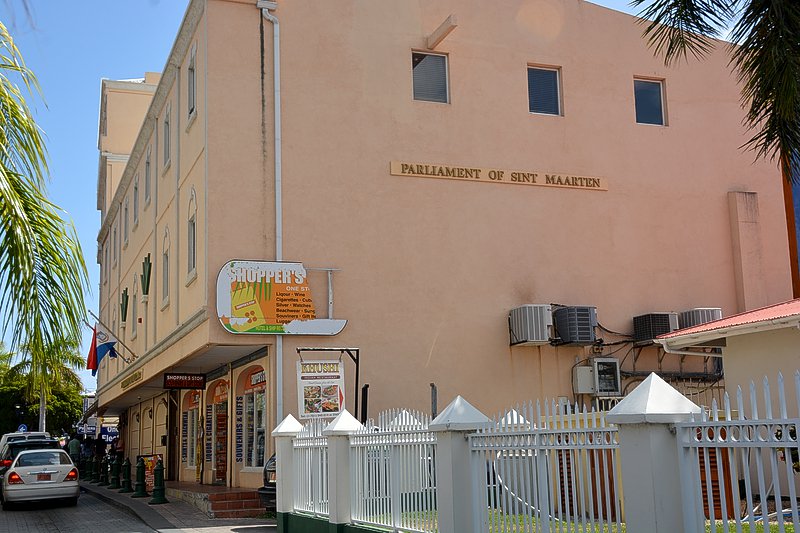 PHILIPSBURG–The country’s short-term financial outlook is stable, but its long-term prospects are “very unstable” and require urgent attention to mitigate any fallout, Finance Minister Richard Gibson Sr. told Parliament on Wednesday, in a plenary session called by Coalition Members of Parliament (MPs) to get insight into the country’s standing.

In the medium term, covering the three to 10 years, Gibson Sr. said he sees “a lot of possibilities for St. Maarten,” but the long-term view for 10 years and beyond is “very unstable due to certain challenges. Certain ingredients, if not fixed, will have serious negative effects.”
The short-term stable outlook mirrors that of Moody’s, and covered present day until the next three years. Gibson said the 2016 budget and resulting multi-annual budget has much to do with the stable projection. The budget is based on real income and not much is expected to change financially in the foreseeable future as government income and expenditures are more or less fixed.
The short-term stability is expected to hold true barring any external shocks such as a hurricane making landfall, an act of terrorism, a virus outbreak (such as increased Zika cases), or the brewing issue with correspondent international banks ending relationships with local financial institutions.
Midway
Insufficient human resources to carry out government’s business is the major obstacle foreseen by Gibson Sr. in the medium term for the country. The need for qualified human resources has been “covered up” for years by the use of high-priced consultants, a trend that has been halted somewhat by the current Government.
The increasing traffic and resulting traffic congestion are also medium term worries, Gibson Sr. said. Both areas must be addressed before the tourism product and the quality of life for residents are further affected, he said.
Marketing of the destination is paramount with increasing competition in the region, as well as the pull of the destinations further afield such as China. The Minister said St. Maarten can no longer depend on its traditional word-of-mouth marketing and must put attention to structured marketing efforts to boost arrival numbers. “Looking forward we need to do marketing. We need to be able to compete,” he said.
His suggestion for the marketing of the destination is contracting a company with those skill sets to properly position the country in the tourism market place. Aside from marketing, the need for more traditional hotel rooms was highlighted by the Minister. He said the trend that has increased timeshare units and seen larger hotels opt to become all-inclusive properties has led to lessen traditional rooms which are much needed by the country.
Inadequate control within the tax system and immigration has also compounded the country’s outlook, he said. The need for a new tax system is very clear and needs to be tackled post haste, according to the Minister.
“We have threats to our infrastructure,” said the Minister, pointing out that the Simpson Bay strip is in need of much upgrading such as the installation of sidewalks.
The upgrade of the physical look of the country’s product to fixing ways to make it cost effective to visit the destination have to be pursued, he said. One suggestion from the Minister is to have the fees at Princess Juliana International Airport lowered; a move that would impact the price of airline tickets to the country.
The airport’s hub function in the region is “not being optimally used” to generate revenue for the company and by extension the country.
The country does not need a rich airport or utilities company, Gibson Sr. said. Rather, the country needs its companies to pay dividends and invest in making the country better for residents and visitors. “St. Maarten has an excellent product,” he said.
The medium term outlook is also impacted by high young unemployment which “opens the door to crime.”
Gibson Sr. also pointed out to MPs that government instability has a tremendous impact on the outlook for the country. Such instability is a serious threat to planning and has serious effects on the country, as does issues with international banking limitations.
More pillars
St. Maarten cannot continue to rely on its one-pillar tourism economy in the long term, said Gibson Sr. He said it was time to seriously look into diversifying the economy and gave MPs the suggestions of branching out into offering tertiary education options to international students, and to cater to the aging tourist demographic with medical tourism.
Government’s need for human resources continues to take centre stage in the long-term outlook.
The Minister’s outlook for the country was met with a number of questions from MPs supporting the Coalition of Eight. Those questions ranged from the Moody’s rating of the country to how to find people who are evading taxes, and how to tweak the tax and labour systems to better move the country forward.