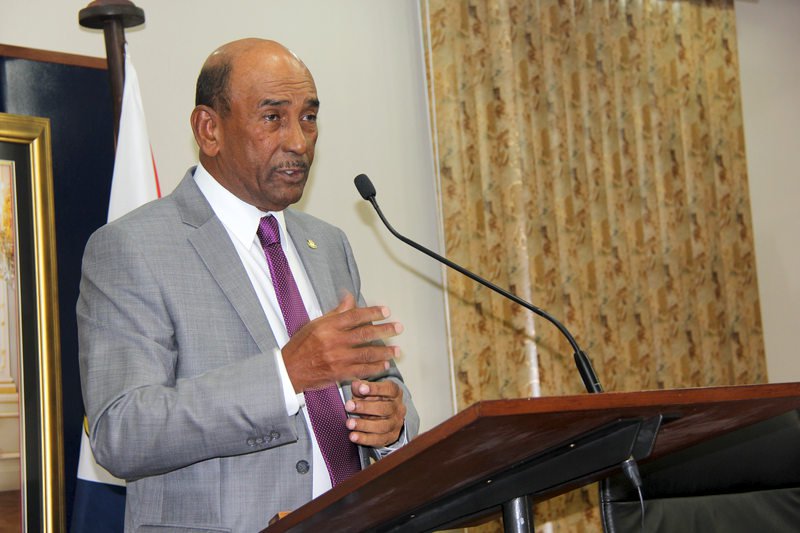 PHILIPSBURG–Government has sufficient reserves to cover the projected NAf. 128 million deficit expected for 2017 as a result of the impact of Hurricane Irma on the country, Finance Minister Richard Gibson said on Wednesday.

He told reporters at the Council of Ministers press briefing on Wednesday that due to Irma, the previous projections and predictions in the budget no longer hold. Prior to Irma the country was projecting a substantial surplus.
“In fact, two-thirds of the income for the entire year had already been collected for 2017 and we had a surplus showing about NAf. 12 million. Heading to end of December, we were expecting a healthy 2017, financially. Irma made sure that was not going to happen and the reverse is now the case,” Gibson said.
He said the income projected for September to December has reduced drastically as there is now no basis to predict that the income that had been projected will be realised. “When you do the tally, we will have approximately a deficit for 2017 of around NAf. 128 million,” he said.
Gibson submitted a revised budget for 2017 to the Council of Ministers on Tuesday. This is now being discussed and Gibson expects to receive an approval soon.
“The deficit projected in 2017 budget can be covered. There are sufficient reserves that the deficit can be handled,” he said.
When asked how much Government has in its coffers as reserves, Gibson said: “We have submitted a budget and that still needs to be approved by the Council of Ministers, so one cannot just automatically assume that the budget that I have submitted will automatically be approved.
“But we’ve got funds in reserves. We have funds that we borrowed … to the tune of NAf. 21 million for capital investments that will probably have to be deferred and we have funds that we owe that probably also can be deferred to other purposes than originally was the case. Those are the funds that we have in cash now, that we’re looking at and making suggestions in order to cover those deficits, including the normal ability we have to borrow under normal circumstances.”
Government has also started working on the 2018 budget, which Gibson says is “a work in progress.”
“Also, we can predict now that 2018 will show substantial deficits that need to be covered somehow and ways and means are being discussed to see how those deficits will be covered. It is almost certain that our ability to borrow, which is limited, will not be such that we will be able to cover all the deficits that we expect to incur over 2017 and 2018. …
“We will have to look firstly towards the Netherlands and towards the rest of the world to see what grants we can obtain, which is normal under these circumstances for countries ravaged by natural disaster and loans. We will have to maximise the capacity we have to borrow and we still have some room in terms of our assets.
“We still have assets and those assets have value and how we use those resources to be able to carry on is under discussion and we are seeking ways to deal with it effectively,” he said.
Gibson said also that things after Irma will not be the same. “We have less jobs, less businesses operating and that has consequences, consequences for people who are on the island who no longer have jobs, who came here looking for jobs, and the question has to be: Will we have sufficient means and ways to support them, give them welfare, or whether or not decisions have to be made that probably it’s best to repatriate, because the nature of the damage our infrastructure sustained is that you cannot build a hotel overnight.
“It will take two or three years before jobs come back. Jobs in the construction field will be plenty. That’s the main source of jobs we have now, but we can’t convert everyone overnight into construction workers and a balance has to be found that we can live with and work with and that we can finance.”