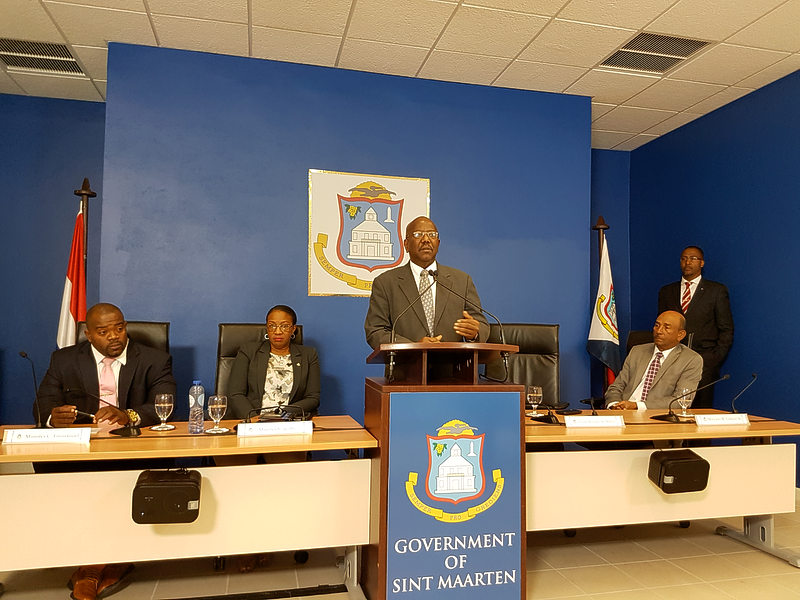 PHILIPSBURG–The New Year, set to start in just a few days, will be dominated by Government’s efforts to bring into effect significant tax reform.

Finance Minister Richard Gibson said in the Council of Ministers press briefing on Wednesday that the country’s tax system “does not line up with the times.” The intention is to push for a system focused more on indirect taxes in an attempt to broaden the tax base and capture those in the community who are slipping through the cracks.

The Finance Ministry will also put emphasis on generating ideas for more structural income for Government. Gibson said Government’s coffers and the budget can no longer be boosted annually with just incidental, non-structured income.

“We cannot build a strong foundation on this. … Steps must be taken to make sure we have income to count on,” said Gibson.

Government was occupied in 2016 with “the engineering of the move” into the new Government Building on Pond Island.

Gibson said the Council of Ministers was “proud to [be – Ed.] in the building … after eight years of [it] housing pigeons.”

The main challenge of 2016 was keeping the budget on track, he said, adding that the “shenanigans” of the former board of directors of utilities company GEBE had not helped. In the end, Government persevered and was able to collect payments from the company that had been “sitting in a bank account for years.”

The past year was “the year of building and laying the groundwork for future years,” Gibson said, and the future looks promising, especially with Government paying off two-thirds of its debt that amounts to NAf. 200 million. With this the country now has its debt under control.