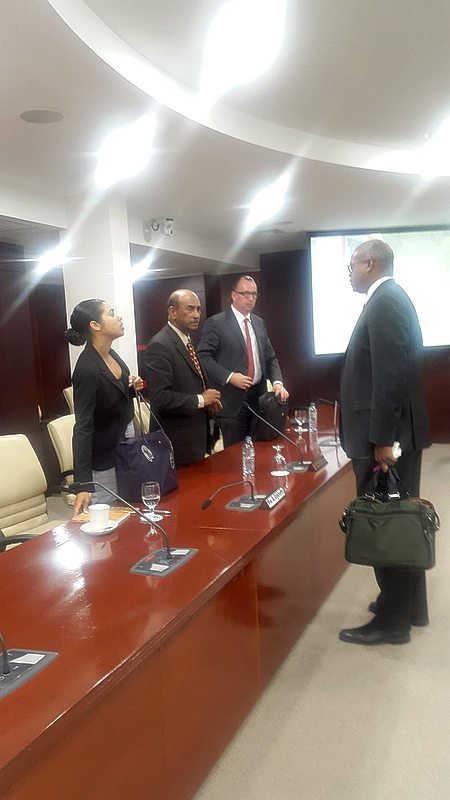 PHILIPSBURG–Finance Minister Richard Gibson has called on Parliament Tuesday to either pull back the national ordinance to establish the integrity chamber or amend it. Should Members of Parliament (MPs) opt for amendment, he urged them make changes to ensure St. Maarten is in charge and not the Dutch Government.

The law, passed by Parliament last year, is currently with the Constitutional Court for a decision after the Ombudsman filed a case against it. The major issue the Ombudsman brought forward is the infringement on personal freedom and protection.
The proposal from the Minister came after he outlined the many ways he has seen the Dutch Government has not lived up to its promises or have not acted with integrity in relation to St. Maarten.
In response to his proposal about the law, independent Member of Parliament (MPs) Cornelius de Weever told Gibson he was part of the governing coalition and he should lobby his coalition partners to compose a proposal “to throw it out.”
Parliament Chairwoman MP Sarah Wescot-Williams said if the law needs to be changed the proposal should come from Government as the law was tabled by Government. Any change to the law should also come from Government.
Gibson was in Parliament on Tuesday afternoon to discuss the financial state of the country. He outlined the shortfall in the first quarter revenues and increase in collections in the fourth and fifth months of the year.
Government’s budgeted expenditures are down by some NAf. 7 million due to the “frugal policy” pursued by the Minister. “The budget is right on target … income and profit taxes are showing an increase,” said Gibson.
Pointing to a global shakeup, the Minister said the country must protect itself by “finding another economic pillar … the path we are on is not sustainable in long term.”
His proposal is for investments in hydroponics, the method of growing plants using mineral nutrient solutions, in water, without soil, “like Anguilla.” Or, the next option is fisheries. “We live in the Caribbean after all.”
Plans for the building of a new hospital should also be looked at “as the creation of another industry” for the country, said Gibson.
Gibson is slated to meet with the Committee for Financial Supervision CFT on June 28 about the need for the country to access loans to upgrade its tax infrastructure. He intends to have a “heart-to-heart” with CFT. If the Committee does not agree to allow access to a loan, “an alternative” has to be found, said the Minister.
MPs peppered the Minister with a number of questions covering the financial state of the country; whether the issue lies with tax compliance by taxpayers or insufficient collection efforts by government; what is being done to boost investors’ confidence, among other topics.
The plenary session of Parliament, requested by opposition MPs, will resume next week. The session was suspended to give the Minister time to answer the questions posed by parliamentarians.
Source: Daily Herald
Gibson to MPs: Pull back Integrity Chamber Law