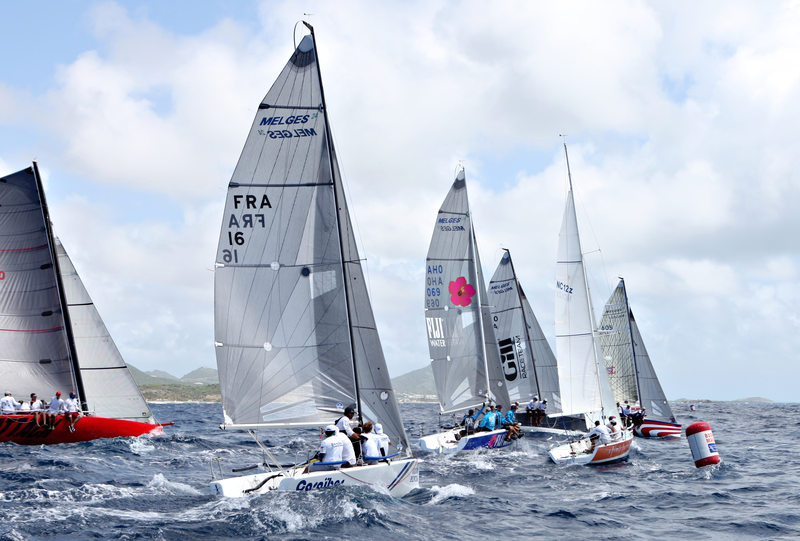 Frits Bus’s crew–not the regular crew for this regatta–never got to draw their weapons and after a spectacularly successful season with their new hull it was unfortunate they fell at the last hurdle.
“Our main halyard broke in the second race so we had to abandon that race and then we had a broken rudder bracket and had to fix that,” explained Frits who finished second to Gill in the around-the-around the island race on Saturday. “In the two races we had left to make amends I was too eager and we were over early twice,” he lamented.
Island Water World was not the only one to suffer equipment failure. Vanille, the First 300 Spirit skippered by Neil Maher broke their mast in the first race and had to withdraw.
Without the mishaps who knows what the outcome would have been in a very competitive class of five Melges 24s? But to Gill Racing Team’s credit this was their seventh consecutive class win in this regatta, after snatching the bullet in all four races.
The Melges 24 Caraïbes Diesel (better known as French Connection) was second overall in the seven-boat class and Boost N Sail another Melges 24 was third overall.
Cruising Class was won by regular stalwarts Speedy Nemo from St. Barths, An upbeat Roger Petit steered his Belaurora into second place while Garth Steyn skippered Purple Heart with three kids on board to third place.
It was the first time Purple Heart, the boat famously built from a kit by Milton Peters College students, used their spinnaker.
“There’s still a lot to learn on the boat regarding getting the set up right, but she performs well,” said Garth. “We’ve only sailed her a handful of times.”
Highly conspicuous by their absence in Cruising Class was the normally ever-present L’Esperance. Owner Bobby Velasquez however is off-island for medical treatment and some of his regular crew such as Jan Beaujon joined Roger Petit’s boat for the regatta.
And in another surprise veteran sailor Pat Turner was invited to take the helm on his former 45-year-old Dick Newick wooden trimaran Tryst. He disclosed he donated the trimaran to Arthur Banting who has refurbished it to its former glory after it was damaged in Hurricane Gonzalo.
Tryst’s rebuild was sponsored by FKG Rigging, Lagoonies Marina and Bobby’s Mega Yard.
“For me Arthur was the perfect choice to bring up a new generation of young sailors,” said Pat. “It was an emotional parting of the ways for me but I know Tryst is in good hands.”
With no other multihulls competing skipper Banting and crew accepted the Rum Class fun trophy and Pirate Award.
The 12th Coors Light Captain Oliver’s Regatta was organised as usual by Stuart Knaggs and Mary Wrigley. Race Officer Andrew Rapley noted sailors revelled in classic Easterly 15 knot trade winds. Three back-to-back races were organised Sunday around an Olympic triangle.
Winners went home with Eldorado Rum and trophies by Carla Templeton.