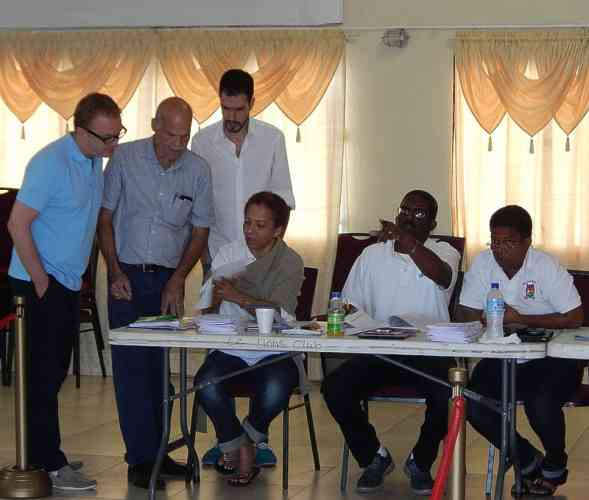 United Nations observers (standing at left) observing the vote count during the referendum on St. Eustatius constitutional future which was held in December 2014.

ST. EUSTATIUS–Brighter Path Foundation (BPF) has launched a GoFundMe campaign aimed at raising funds to finance the execution of an independent assessment of the political situation on St. Eustatius, which they say would “hopefully” lead to the island’s re-inscription on the United Nations List of Non-Self-Governing Territories.

Asked about the purpose of the GoFundMe campaign, BPF responded that the former Netherlands Antilles, of which Statia was a part until October 2010, was removed from the United Nations list of Non-Self-Governing Territories (NSGTs) in 1955, after the Netherlands proclaimed that, with the creation of the Kingdom Charter, the islands had become self-governing.

However, according to BPF, the history books have revealed there was much contention surrounding the removal of the islands from the United Nations (UN) list of NSGTs because many countries, including India and Guatemala, were not convinced that the islands had achieved a full measure of self-government, particularly in light of the role of the governor within the Kingdom Charter.

BPF said Statia’s present situation requires the involvement of the international community to monitor the governing situation on the island.

Re-inscription means that the international community would be looking over their shoulders at the way the Netherlands assists the people of Statia in giving content to their aspirations for their future.

Re-inscription also means that the issues of self-determination and democracy would no longer be labelled as internal issues, but as matters that fall under the scrutiny of the international community.

“There is an urgent need for dialogue between Statia’s local representatives and The Hague as it regards the further development of our small nation, whereby the wishes, hopes and dreams of our people remain central. This process requires the urgent restoration of our democracy. In addition to this, the guidance of the dialogue process could take place with the assistance of the UN as a third neutral party. Statia’s re-inscription on the UN list of NSGTs would be beneficial to us in so many ways”, the campaign organizers concluded.

The GoFundMe campaign is available online via https://www.gofundme.com/a-quest-for-un-reinscription. Persons in Statia can also drop off donations at Lyn’s Dream Bakery or at Lady Ama’s Supermarket.