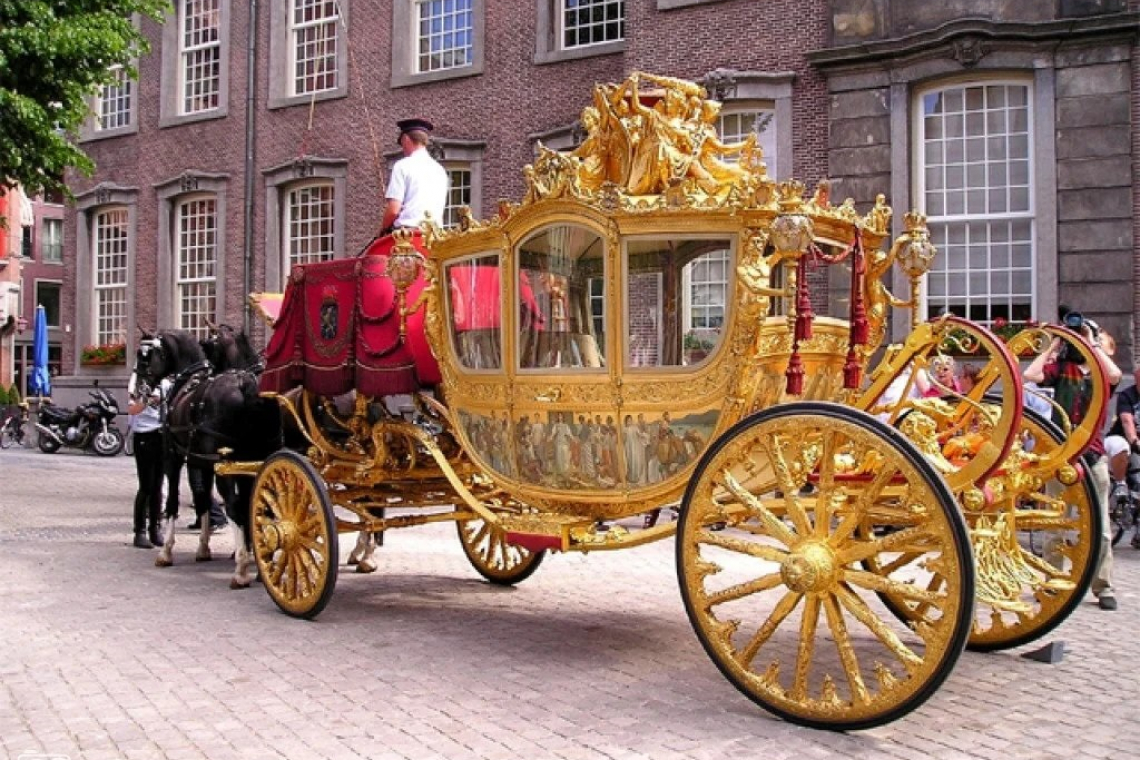 THE HAGUE–The gold lining of the “Golden Carriage”, used until recently to transport the king and queen on ceremonial occasions such as on Budget Day (“Prinsjesdag”), almost certainly came from the former colony of Suriname, experts have concluded.

Analysis of a tiny piece of gold taken from the carriage during its recent restoration indicated that the metal was most likely to have been mined in the former Dutch colony during the 19th century.

Annemarie De Wildt, curator at Amsterdam Museum, already suspected that the gold came from either Suriname or South Africa, but the documents that would establish its provenance have been lost.

Instead, the museum worked with professor of Petrology Gareth Davies at the Vrije Universiteit (VU) in Amsterdam, to compare the gold from the coach with particles from South Africa, as well as specialists from the Netherlands Institute for Conservation, Art and Science (Nicas) and Naturalis Biodiversity Centre.

“The makers and initiators of the Golden Carriage prided themselves on the fact that the gift to the new monarch, Wilhelmina, was meant to represent the entire kingdom of the Netherlands at the time,” said de Wildt. “Suriname, which was then part of the Kingdom of the Netherlands, did not seem to be represented. That raised questions,” said De Wildt.

“South Africa was a major exporter of gold around 1900, and the region had strong ties with the Netherlands, but in Suriname people have said from generation to generation that the gold came from there.”

Davies explained that his studies had ruled out South Africa as the source of the gold, leaving Suriname as the only credible candidate.

“To compare gold, we look at the lead isotopes formed by the radioactive decay of the elements uranium and thorium. These vary by region,” he said.

A clean sample is needed for such a comparison, but the gold of the Golden Carriage contained numerous lead particles that came from the air pollution to which the coach has been exposed over the years, such as exhaust fumes from gasoline.

“It was like plucking a single grain of sand out of a pool filled with sand, a huge job that took more than four months, De Wildt said.

“After careful analysis, we can say with certainty that the gold of the Golden Carriage did not come from South Africa. From a historical perspective, South Africa or Suriname are seen as the only probable options.”

The carriage was made in 1898 as a gift for Queen Wilhelmina at her coronation with materials including Javanese teak wood, ivory from Sumatra and leather from Noord-Brabant.

The carriage was intended to represent all the corners of the Dutch empire, but has become controversial in recent years because of a side panel that depicts black slaves bowing and offering gifts to a white woman.

It was taken out of circulation in 2016 for a five-year restoration, after which it went on display in the Amsterdam Museum for eight months until February 2022. There is strong speculation that it will not return to active service.

Suriname became an independent republic in 1975 after three centuries of Dutch colonial rule. On Monday, Mark Rutte arrived in the Surinamese capital Paramaribo for the first visit by a Dutch prime minister since 2008. He is accompanied by Minister for Foreign Trade and Development Cooperation Liesje Schreinemacher.

The visit comes at a time of criticism for Surinamese President Chan Santokhi. There were protests against his government as the country is in economically difficult weather.

The departure of President Desi Bouterse two years ago paved the way for a warmer relationship between the Netherlands and Suriname. Bouterse was convicted in the Netherlands of drug smuggling. In 1982, his military regime killed 15 opponents at Fort Zeelandia. Rutte will lay a wreath at the site.

Rutte will also address the Surinamese Parliament and have a conversation with representatives of the National Committee for Commemoration of Slavery Past and the National Repair Committee Suriname about the slavery past. Rutte is not expected to apologise for the role the Netherlands played in the trans-Atlantic slave trade during this visit.