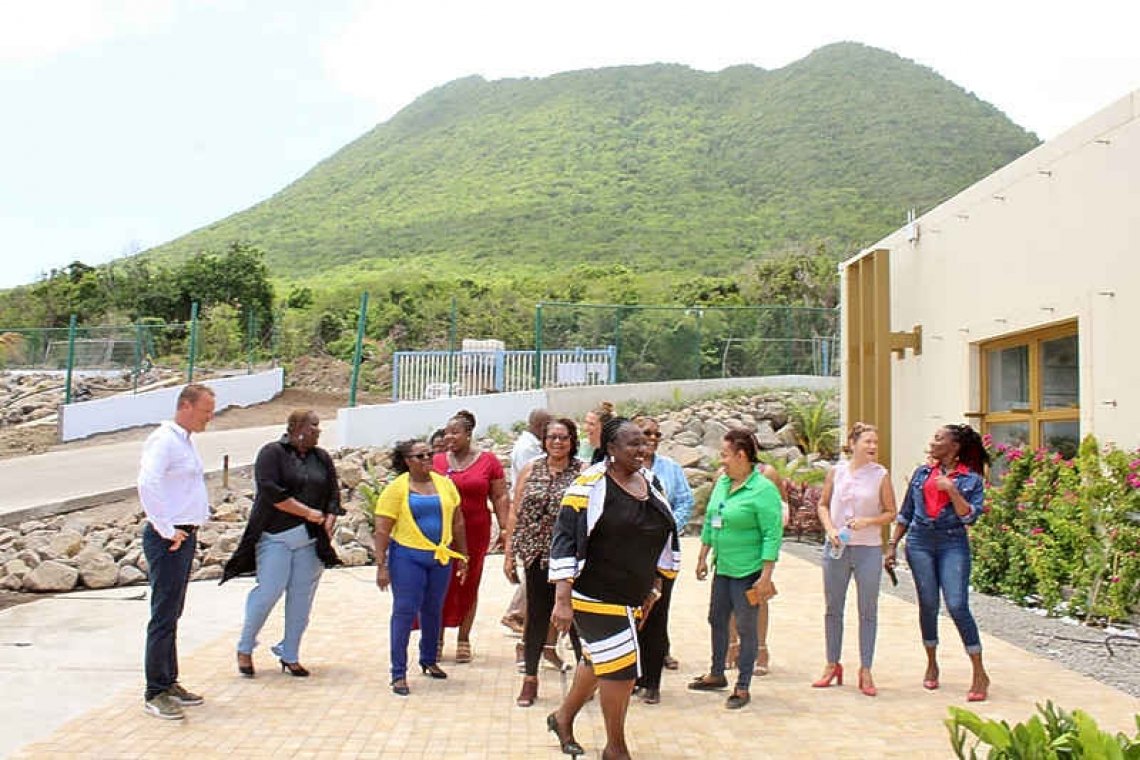 ST. EUSTATIUS–Golden Rock Resort is currently nearing completion of phase one of its construction. The resort that sits at the back of The Quill volcano recently gave a tour of its facilities to stakeholders.Golden Rock Resort developer Peter Barnhoorn (left) with stakeholders at the entrance to Golden Rock Resort. One of the buildings under construction at Golden Rock Resort.The water-circulation system at Golden Rock ResortDeveloper and Simba BV Chief Executive Officer Peter Barnhoorn said the resort will have rooms of different sizes. The smallest room will measure 40 square metres, the medium-sized rooms are 55 square metres and the largest rooms 80 square metres. The resort will also have a swimming pool of 550 square metres, tennis courts, a massage parlour and other amenities. A boardroom is expected to be completed by the end of this year.Barnhoorn, an owner of several restaurants in the Netherlands, said he is “very proud” of the resort’s state-of-the-art restaurant, which he aims to make one of the best in the Caribbean with an extensive menu. The restaurant measures 350 square metres and a full team from the Netherlands is expected to travel to Statia to install the restaurant equipment, which is expected to take four months.While eating out one day at a local restaurant, Barnhoorn realised that half the menu was unavailable due to the container ship with supplies not being able to travel. To prevent food shortages at the resort, a huge storage capacity was constructed with a cold room and freezers that can accommodate four sea containers with food.Should local establishments need to store frozen goods, the resort could accommodate them, Barnhoorn said.Because the roads leading to the resort are in bad shape, the resort is looking into having its customers utilise shuttle buses, which would run every half hour. Some six or seven bus stops are planned in Oranjestad for resort guests to visit local establishments.Barnhoorn said discussions with the island government are expected to take place concerning the question whether small studios or apartments will be built on a plot of land at the resort which is currently still vacant. “It will all depend on how the coronavirus influences our business,” he said.He said he believes people will go for the niche market, in which smaller islands and small hotels will flourish because of changing demand. “Because of this the resort can be a success for us and for the island,” said Barnhoorn, who is looking into ways to put St. Eustatius on the map for island-hopping.He said he was grateful to the public entity St. Eustatius for allowing essential workers on the island during the COVID-19 pandemic. “It is much appreciated and is needed for projects like this to get off the ground.”The resort’s water circulation system will ensure that no wastewater will be spilled into the environment. A very large septic tank was constructed 12 metres underground, which has a natural overflow and specialised carbon filters. The water will stay in the tank for 72 hours, after which the cleaned water will be used for agricultural purposes.Building the resort at the very rocky and hilly location required heavy groundwork for more than a year. However, flattening the area raised the risk of runoff water from the surrounding cliffs into the sea. Therefore, artificial hills are being constructed in close cooperation with St. Eustatius National Parks STENAPA to prevent rainwater from running down the cliffs and causing erosion. A mini golf course for children will be created in the area.“Right now, it is dusty and in the process of being built, but slowly but surely you will see the results,” Barnhoorn said. Golden Rock Resort aims at guests of 50 years and older from abroad, and at the people of Statia. The resort seeks to incorporate different restaurants on the island for its guests to sample different foods.Dihiara Pierre-Arnaud of Island Essence said the resort, Statia and its attractions have been extensively marketed in the United States, the Netherlands and the Caribbean during the past three months.