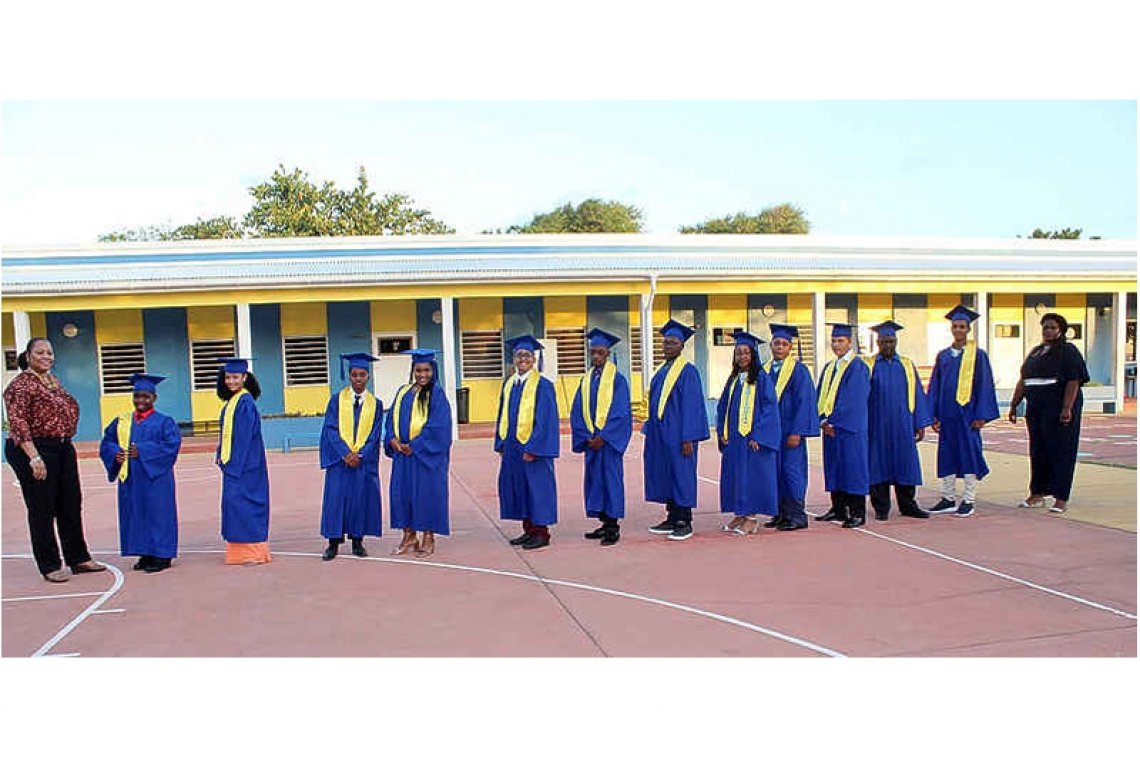 Golden Rock Roman Catholic School in St. Eustatius held its 2020 graduation under the theme “I Am Worthy”. Thirteen pupils graduated from the school during the ceremony. In photo: The 13 graduates with valedictorian Eliannie de Gannes (sixth right), board president Judith Gibbs-Thomasia (left) and teacher Rhea Courtar (right). Story on page .

Also in attendance were Deputy Government Commissioner Alida Francis, parents/guardians, teachers, school director Irene Ortega, school board members and many family members and friends of the graduating pupils, including valedictorian Eliannie de Gannes. The pupils will be transferring to Gwendoline van Putten (GVP) Secondary School for the new school year.Ortega announced during the graduation ceremony that after working as an educator for 44 years she would be retiring this year.The graduates performed under the guidance of school board president Judith Gibbs-Thomasia, after which Francis spoke to those in attendance. She said the theme “I Am Worthy” was appropriately selected and could not have come at a better time. “Understanding one’s worth is so crucial, as you are at a stage in your life where you will need to begin to make certain choices and decisions independent of your parents.”She encouraged the children to not let anyone decide whether they are worthy or not and said they are worthy of anything as long as they are willing to do the work it takes to make it happen.“In life you will be dealt different cards. Always remember they are just cards. You can keep ones that serve you and pass on the ones that do not. You have just as much of a chance as anyone else does if you only choose to, so the only thing that makes us worthy are the choices we make,” Francis said in congratulating the graduates.Keynote speaker Ingra Bennett said that when she was studying abroad she had encountered persons who disparaged her because she was from St. Eustatius. She said she had been able to get through that period in her life that because of the support she received from her friends and family.She also recalled how, while in HAVO, she had a teacher challenge her by giving her a difficult assignment. She was able to ace the assignment and was subsequently informed by the teacher that he had assigned her that particular project because he knew she would be able to do it. This experience taught her that she was indeed worthy and should never doubt her abilities, Bennett said.“You may be feeling a bit uneasy at this time not knowing … what to expect at GVP. Your uniform will be different, the classrooms will be different, your teachers will be different. Every subject will require 100 per cent from you. …“You will go through situations that will make you feel less than useless or even dumb, but keep pressing on. With the help of your parent/guardian, friends, family and church circle you will achieve whatever you set your mind to.“It will be a new experience. Trust yourself, keep doing what you have been doing that brought you to this point and improve on it no matter what. Just know that you are worthy.”