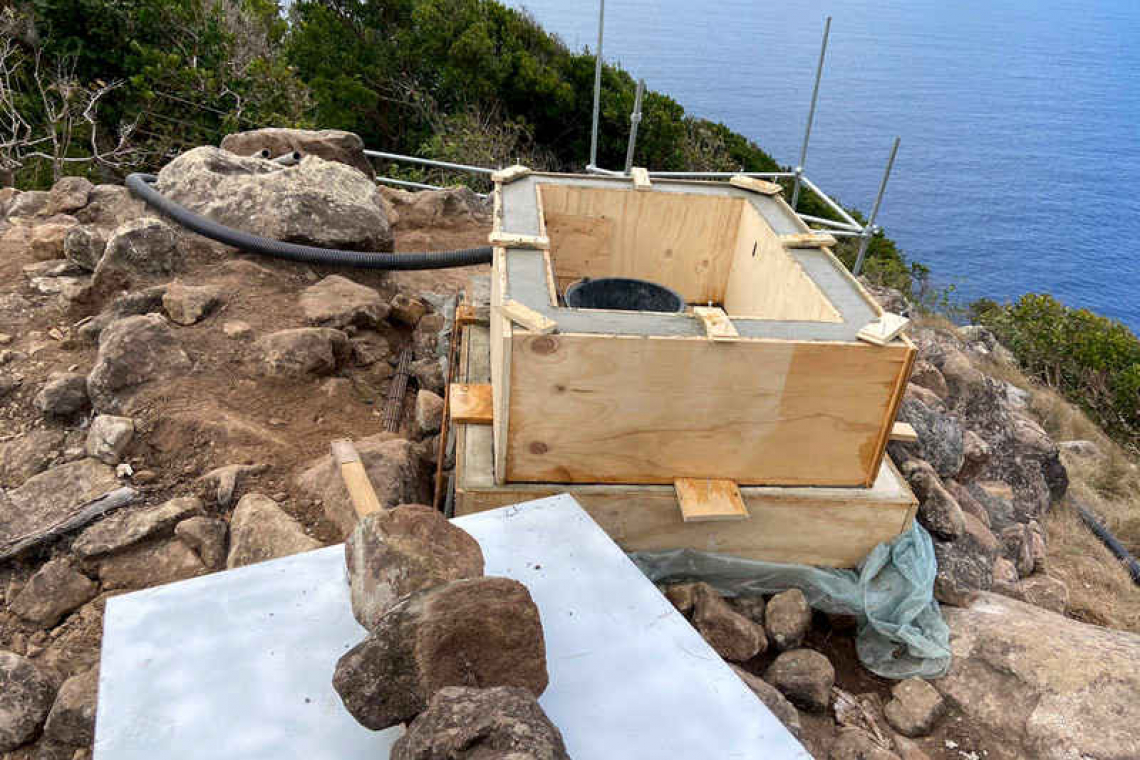 The construction of the concrete enclosure for the seismic meter.

SABA–Works to construct a new monitoring station of the Royal Netherlands Meteorological Institute KNMI on the northern coast of Saba are progressing steadily. A team of Dutch military personnel stationed in St. Maarten has been carrying the materials along the North Coast Trail to the location on Grey Hill where a KNMI team is constructing the new monitoring station.

Military personnel completed the task of carrying some 2,000 kilograms of material on foot along the North Coast Trail, covering a difference in altitude of some 300 metres, on Thursday, April 8, ahead of time.

On multiple trips per day, the men carried a number of very heavy items up the rough, mountainous trek to Grey Hill, such as a generator, a large satellite dish, the solar panels and the casing for the electronics. They also carried multiple bags with concrete, and a load of water necessary to mix concrete for the construction of the monitoring station and its foundations.

The KNMI team of four have constructed the foundation and the walls of the enclosure that will hold the seismic equipment. The team started the construction of the frame for the solar panels on Thursday. The foundation for the Global Navigation Satellite System (GNSS) was constructed and the cables were laid in the cable ducts. The mast for the satellite dish has been installed. The construction of the monitoring station needs to be robust, as it has to be able to withstand strong winds.

The monitoring station consists of a GNSS and a seismometer. With the GNSS, deformations of the Mt. Scenery volcano can be precisely measured. The seismometer registers local and regional earthquakes, and this data will also be used for tsunami warnings. The measuring station on Saba’s North Coast is extra special because it operates completely independently: the solar panels generate electricity while the satellite dish transmits the data.

Island Governor Jonathan Johnson visited the location on Thursday, April 8, when he presented a Saba pin to Sergeant-Major Marine Frank.