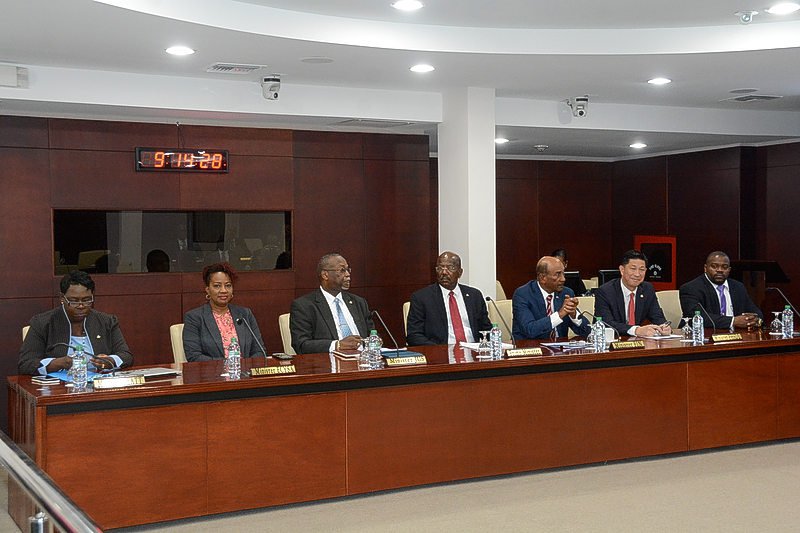 Prime Minister William Marlin provided Members of Parliament with a brief overview of the programme titled “2016-2020 – United Democratic Alliance: Stability for Prosperity,” which was released online on March 23.

The release followed the postponement of a planned Parliament meeting in which Government was slated to present the Governing Programme.

“The United Democratic Alliance’s vision is to provide inspired leadership to meet the needs of our nation for the next four years and beyond. We aim to be a unified and effective government; to strengthen cohesion and cooperation among ministers, within ministries and parliament and by extension thereof foster a more prosperous society,” read the foreword signed by party leaders Marlin (NA), Frans Richardson (US Party) and Sarah Wescot-Williams (DP).

Marlin explained on Tuesday that the programme is a “strategic action plan” made in cooperation with the ministries, the Secretaries General, cabinet staff and other civil servants “to get everybody” in the government organisation “on board and committed and going in the same direction,” adding that the programme is a “guide” which is “not set in stone.”

“Government has defined five strategic objectives,” according to Marlin. Those objectives are nation building and good governance; sound financial management; public safety; socio-economic and environmental sustainability, and enhanced quality of life. “All five points include a great number of initiatives by all ministries,” Marlin said.

Funding of the strategic objectives, the Prime Minister said, can only be achieved with adequate and well-balanced funding based on increased tax compliance, lower cost of operations and the “elimination of red tape,” in order to secure a balanced budget and responsible spending.

In the area of public safety, Marlin mentioned for instance, an evaluation of penalties for criminal acts; strengthening of the Police Force, Customs and Fire Department; tackling of illegal immigration, human smuggling and trafficking; and the promotion and protection of the rights of the child.

Diversification of St. Maarten’s tourism product and the strengthening of the island’s position as a maritime and aviation hub, as well as the implementation of an energy policy plan, enhanced infrastructural management, and the renovation and upgrading of public schools, as well as a comprehensive Road Network Plan, proper management of water drainage, and the expansion of the sewage network were mentioned by the Prime Minister under the socio-economic and environmental chapter.

“Creating an inclusive society where no one is left behind” is the coalition’s motto for the “enhanced quality of life” chapter. Plans in this area include an improved healthcare system with universal coverage and enhanced pension benefits, care for the elderly and vulnerable, and the alleviation of poverty,” Marlin said in citing from Government’s “long list of priorities.” The full Governing Programme is available www.StabilityForProsperity.sx.