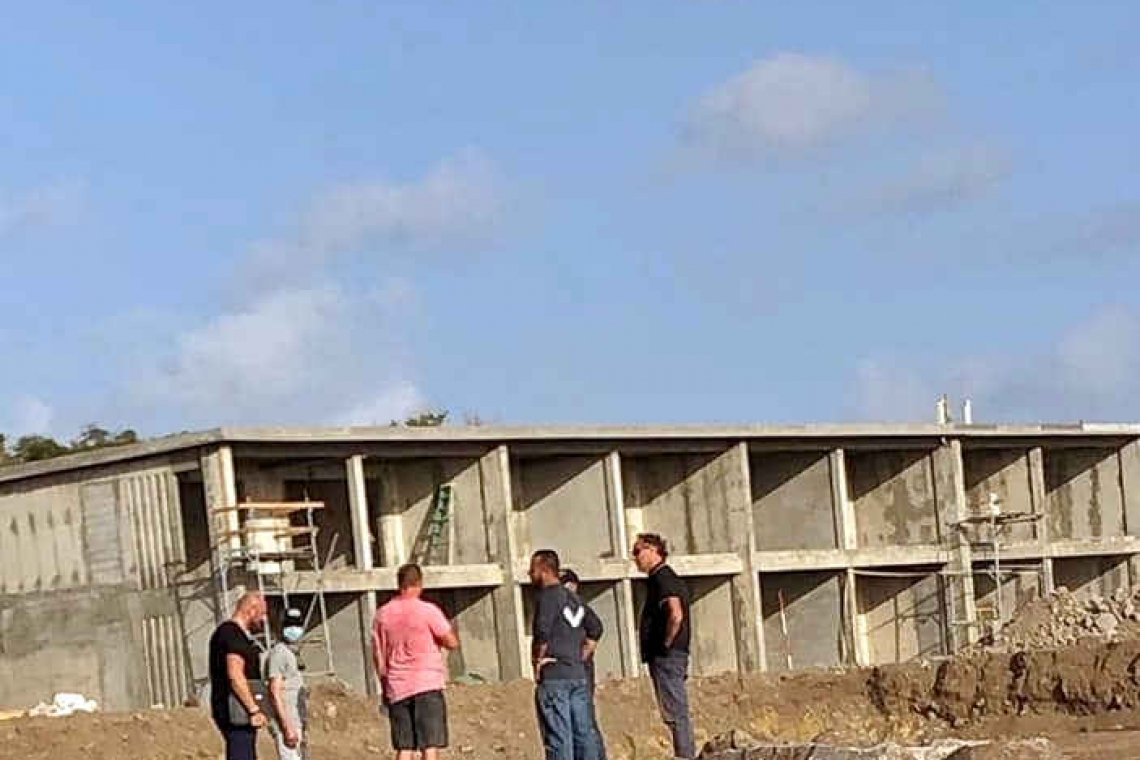 Essential workers and local workers on the job site not adhering to the adjusted quarantine protocols.

ST. EUSTATIUS–Accusations have been levied against the government concerning how essential workers were shown preferential treatment compared to repatriated residents of St. Eustatius.

Seventeen essential workers for Golden Rock Resort arrived on the island on Wednesday, August 12. This group was placed at the central quarantine (Old Gin House and Papaya Inn).According to the island’s travel protocol, anyone who enters the island from a medium- or high-risk country has to be placed in quarantine for 14 days due to the COVID-19 pandemic. An adjusted protocol was introduced whereby essential workers arriving from medium-risk countries were allowed to work while also being in quarantine. The workers are only allowed to leave quarantine to work; otherwise, they still have to adhere to quarantine obligations.The essential workers started working on Thursday, August 13. According to the agreed protocol, they would work alongside local workers, but social distancing would be applied and face masks would be used.

Statia’s crisis manager Peter Glerum and the government commissioners visited the Golden Rock Resort on Thursday morning for an inspection. Hiccups with the plan were discovered and were immediately corrected. “I witnessed that the workers from Holland were all exhibiting social distancing and wearing face masks. However, some executors of the local contractors were not wearing face masks while they were speaking to the essential workers,” said Glerum.The essential workers were social distancing and wearing masks, so there was no danger, Glerum said, but he added that the approach can be improved. The situation was addressed and the local workers wear masks now when speaking with the essential workers, while also practising social distancing.

“The government and police will both intensively monitor and inspect the situation to assure that the highest level of safety is kept and we will not hesitate to stop the work when we see a breach of protocol that can lead to direct risk of contamination. We developed this protocol so working can be done under quarantine regulations, as we are aware of the fact that our economy and future of our island need that work to go on,” Glerum said.He mentioned several projects for which essential workers are required to ensure success and to keep the economy running, including the airport, road projects and St. Eustatius Utility Company STUCO; as well as having an engineer at a laboratory.All this will be done, but always with the intention of safety first and no protocol will be executed with any company where the plan is not in accordance with public health.

Glerum assured the public that the government would not expose the island to high risk for economic profit.Statia residents stranded in the Dominican Republic (DR) were repatriated to the island on August 11. These persons stayed at the Norako building for 14 days in quarantine. A plan to get a second group of stranded Statia residents in the DR repatriated to the island is also being worked on. In this plan the government is expected to transport all the Statian residents so stranded back to Statia.

Government Commissioner Marnix van Rij addressed the discrimination claims that were voiced concerning the treatment of repatriated residents and the essential workers from Holland. He said, “There is no issue. Not everything should be looked at as black and white. As a public entity, we work daily to make the best possible choices and we do that based on the information that we have at hand from different sources and we never ever take decisions overnight.”

The COVID-19 stigma of the DR was discussed during a meeting with the families of repatriated Statians. The DR is categorised as a high-risk country by the Statia government, as most countries in the Caribbean region had reported when that residents were repatriated the countries experienced a rise in imported cases of COVID-19.Van Rij said the Statia community was afraid and had serious doubts about whether the repatriated residents should be allowed entry to the island. He said the flight had been executed because these residents had been waiting five months to come to Statia and they have rights equal to those of everyone else on the island.He said only time would tell whether this flight was a good idea or not, but the government had to make decisions on the information available, taking into consideration everyone’s civil rights.

All repatriated residents had to undergo a COVID-19 test before they were allowed to return to the island and they will also be required to undergo a second test which has to be negative before they can exit quarantine.He said there is a difference concerning the essential workers who came from the Netherlands. The Netherlands has a population of 17.3 million and the active COVID-19 cases are 9,000-plus, which means that the Netherlands is categorised as a medium-risk country.The essential workers who travel to the island from the Netherlands or from a medium-risk country are subjected to the adjusted quarantine protocol. The essential workers have to undergo a COVID-19 test and the test has to be negative before they are able to board the flight. He said that is the reason for the adjusted quarantine protocol as explained by Glerum.

Van Rij said that if the group of essential workers had come from a high-risk country like the United States, the government would have not opted for the adjusted quarantine. If the Netherlands had re-qualified from medium-risk to high-risk, the government would never have adjusted quarantine.He directed his comments to the person who stated that there was discrimination with regard to how the essential workers from the Netherlands and the repatriated Statian residents were being treated.“This is far from the truth. That is the last thing that the government would ever do and that is, by the way, in conflict with Article One of the Constitution. So, all our decisions are based on facts. We simply cannot allow flexible quarantine for the repatriated residents, simply because DR is categorised as a high-risk country,” said Van Rij.

There is security placed at the locations of both the essential workers and the repatriated residents in the evening/night to ensure that the quarantine is enforced.Van Rij said along with Deputy Government Commissioner Alida Francis, their team has been working each day to manage the COVID-19 situation ever since March 13. They are ensuring that the island’s economy does not come to a complete standstill or come into jeopardy, as that would have a negative impact on everyone, both in the short and long term. The government is working to find the right balance between public health and letting the economy continue under responsible conditions.Verbal and photographic proof was circulated concerning the essential workers and the local workers at the Golden Rock project breaking the adjusted quarantine conditions at the worksite on Monday, August 17.

The police chief was made aware of the situation and he in turn made the project manager aware of the break in protocol.