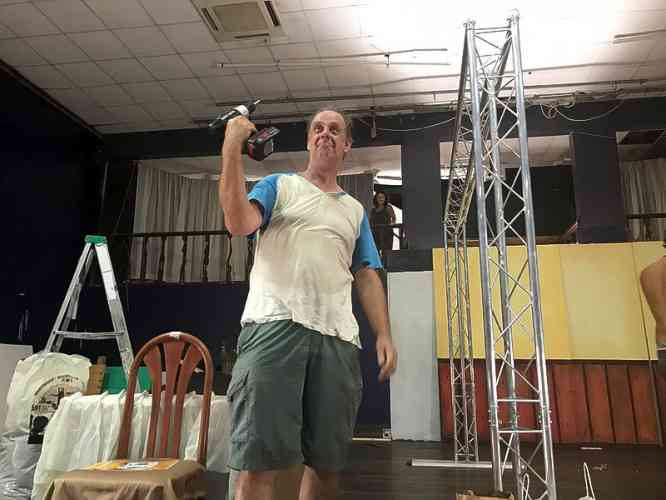 Cast member and set creator Cor Sikkes and director Albina Matuzko (on balcony) are leading the team of fellow cast members, volunteers and technical crew in preparing the stage at the Cultural Centre for the upcoming production of the Russian classic “The Government Inspector” on June 15, 16 and 17.

PHILIPSBURG–Cast members of Behind the Beyond Community Theatre Foundation and director Albina Matuzko of the Russian classic “The Government Inspector” have taken up residence at the Cultural Centre in Back Street, venue of the upcoming theatre production on June 15 and 16 at 8:00pm, and June 17 at 4:00pm.

Cast and directors drafted in some voluntary assistance and moved in a truckload of props, specially painted scenery and other theatrical materials into the Cultural Centre over the weekend in one coordinated moving operation that took several hours to complete.

According to set creator and art teacher at St. Dominic School Cor Sikkes, the sets had to be dismantled at one location in South Reward, transported to their new location, and re-assembled.

He said working on a tight budget and without hordes of people to help move the sets around, he must be creative and inventive and in fact is still fine-tuning and working out little kinks he hopes the visiting audience will appreciate.

Sikkes does not credit the look and feel of the sets as his work alone, since he works directly with production director and his partner in life.

“Albina tells me what she wants and the idea she has for the set and together we come up with the best way of creating that vision, whether it’s through purchases in flea markets, from items we find or have…or whether we make what we need from scratch. She dreams it up and I turn that dream into a physical form.”

Sikkes painted all the sets, giving them a realistic and theatrical look. “I had to research the period and come up with something that not only looked a little dated, but could also pass for any period, in any village, in any country, because one of the things the director wants to portray is no physical boundaries of time and place, because the themes and messages from the play are timeless and as relevant today as they were 170 years ago when the play was first produced.

He says he is not only pleased to see his work taking shape in the Cultural Centre itself, but also with the camaraderie that continues to bind the cast and volunteers together.

“Cast members came out to move stuff and carry stuff and trip over stuff and to cut bush and clean up areas, sew curtains, build ramps, all in the highest spirits and with no complaints. Albina and I are very grateful for that and really appreciate the effort,” stated Sikkes.

Both said they appreciate the professional assistance of the technician who will be taking charge of sound and other technical aspects.

Matuzko says her work now begins in earnest, matching her cast to the production venue, since everyone has been rehearsing in the confines of a classroom for the past several months.

“The cast members can already see that they will be working in a much larger space on stage with lights and sound to contend with. They also have to learn how to work with microphones and various ways to enter and exit the stage.”

She says there is still a lot of work to do, but she is greatly enthused at finally having moved the production to the show’s venue.

“Moving to the Cultural Centre makes it all seem more real now. Excitement is starting to build as we approach our opening night. We can feel it and we can also feel the buzz in the community as word of our production spreads,” Matuzko said.

She said the buzz is leading to a steady scramble for tickets. She is advising theatre goers not to wait to purchase their tickets, since there are early indications that the cast may very well be playing to three full houses.

Tickets are available at The Daily Herald, from cast members and from Behind the Beyond Community Theatre Foundation at tel. 522-6883 or email btbtheatresxm@gmail.com.