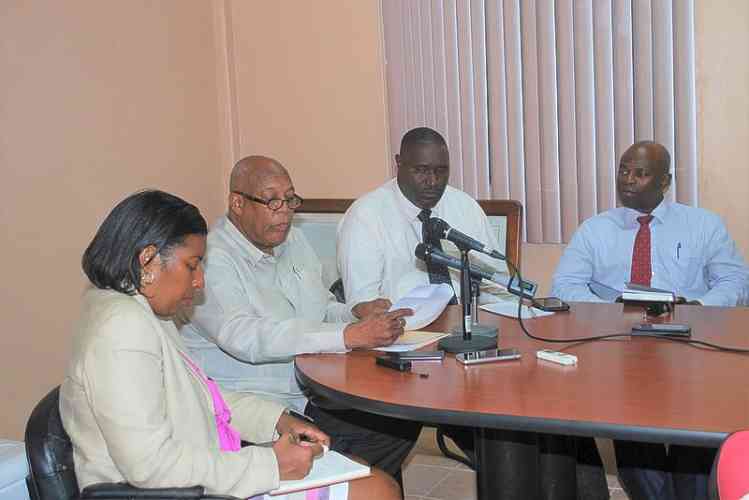 ANGUILLA–Chief Minister Victor Banks started the Government Press Conference on Tuesday, March 13, by correcting discussion from the various talk-shows concerning a letter he received from the Director of the Overseas Territories Directorate, Ben Merrick. There had been accusations that the letter was not made public but Banks read several quotes from The Anguillian newspaper in which he had revealed the contents of the letter.

“The Government of Anguilla will not be engaged in crisis politics – through knee-jerk reactions to unfounded comments by self-proclaimed journalists and political pundits,” he said. “While we do respect their entitlement to their opinion, we as your Government reserve the right to negotiate strategically the issues that impact our island, objectively and professionally, and in an atmosphere of mutual respect.”

The Chief Minister said the process for the disbursement of the 60 million pounds sterling has started and Financial Adviser Stephen Turnbull is overseeing it. Ten project officers have been appointed to oversee the projects, some from the private sector and some from the public service. He said funding would come from the grant. The two primary projects are the Albena Lake Hodge Comprehensive School and the Blowing Point Ferry Terminal. He noted that the Financial Adviser is an adviser and does not make decisions. He is not a member of the Executive Council but can be invited to attend meetings when it is appropriate.

Banks said two teams of investors would be in Anguilla later this week. One group is from Trinidad and Tobago and will be looking at a number of projects where they can assist and give long-term support. Projects include the McArthur Auditorium and the Princess Alexandra Hospital. The second group is from the Dominican Republic and Mexico and is involved in the Conch Bay and Airport Extension projects.

Minister of Home Affairs Cora Richardson-Hodge said the first two projects in the education sector would be rebuilding Albena Lake Hodge Comprehensive School and Morris Vanterpool Primary School, adding that all the other primary schools needed assistance as well. She said the Campus B auditorium repairs have started because it is important for it to be available as this is used for examinations and is the only facility large enough for this.

She spoke about the Labour Code and the fact that concerns and suggestions have been received and said there would be a review and update of the Code before it went back to the House of Assembly. A meeting was held with the staff and management of Malliouhana Hotel where there have been problems with the owners not fulfilling their obligations following Hurricane Irma and staff not being paid for several weeks. The Government has committed to ensure they receive full payment, noting that the staff is very loyal and committed. The hotel is now being put up for auction.

The Minister also spoke about the Community College new building and reported that officials from the Caribbean Development Bank are due on island to review the project and will be asking for bids from local and overseas contractors.

Parliamentary Secretary Cardigan Connor reported that Zemi Beach Resort opened at the end of last month, Four Seasons is planning to open on March 23 and the Reef by CuisinArt on April 1. He reported that Cap Juluca has always planned to open in October, following upgrading and 200 persons currently work there.