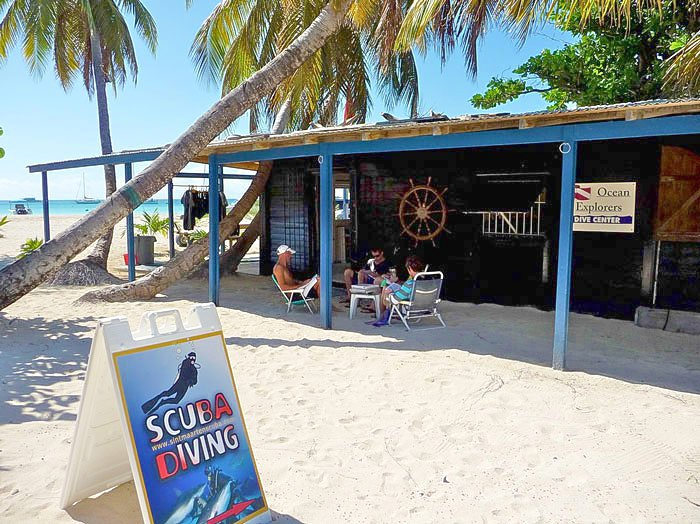 SIMPSON BAY–Attorney Cor Merx announced on Monday that his client Ocean Explorers, operating as a dive centre on Kim Sha Beach, will most likely not end up in court again thanks to Minister of Public Housing, Spatial Planning, Environment and Infrastructure VROMI Christophe Emmanuel.

Ocean Explorers Dive Center, operated by Go Dive St. Maarten NV and Beach Bums Watersports NV, will be allowed to conduct business on Kim Sha Beach in Simpson Bay, the Court of First Instance decided in an injunction on May 19.

The company, involved in diving classes, ocean tours, and the sale of various other products on Kim Sha Beach since the 1980s, had been informed by Government that it is in the wrong location and was summoned to move to make way for the parking lot that is under construction on the premises.

By letter of February 15, Government informed Ocean Explorers that it is conducting business on its parcel of land without any legal basis, as there never has been an agreement between Ocean Explorers and the Government of St. Maarten regarding the usage or rental of the parcel. Because the construction of the parking lot had to be completed in a short period of time, Government could not permit Ocean Explorers to continue what it considered an illegal act.

However, the company took Government to court and won. A meeting between Merx and Emmanuel took place at Top Carrot restaurant on Saturday. According to the Merx, Emmanuel told him he did not want to appeal the case.

“He respects the words of the Judge too much to go in appeal. If the Judge made a statement like that in a judgement Government should think about it. Besides that, it is Government’s money that is spent on this issue. The Minister gave a stiff statement that only the Minister is the one to decide to appeal or not. Not a lawyer,” stated Merx.

According to Government, Ocean Explorers’ parcel and several of the surrounding parcels have been specifically zoned for public parking since 1998. Government stated that Ocean Explorers also had been aware of this since that time.

“The construction of the parking lots needs to be finished to optimise the parking and improve traffic flow and safety. Ocean Explorers’ presence on the parcel – and the ongoing situation – must come to an end,” Government stated in its letter in which Ocean Explorers was ordered to vacate the premises by July 15 or face legal steps.

Ocean Explorers refuses to leave, as there is no other location to be found to continue its operations in St. Maarten.

Government filed the injunction on March 28, calling on the Court to order the dive shop to vacate the area of Kim Sha Beach.

Merx said Emmanuel had promised to arrange a meeting by next week to work out a proper solution between the parties.