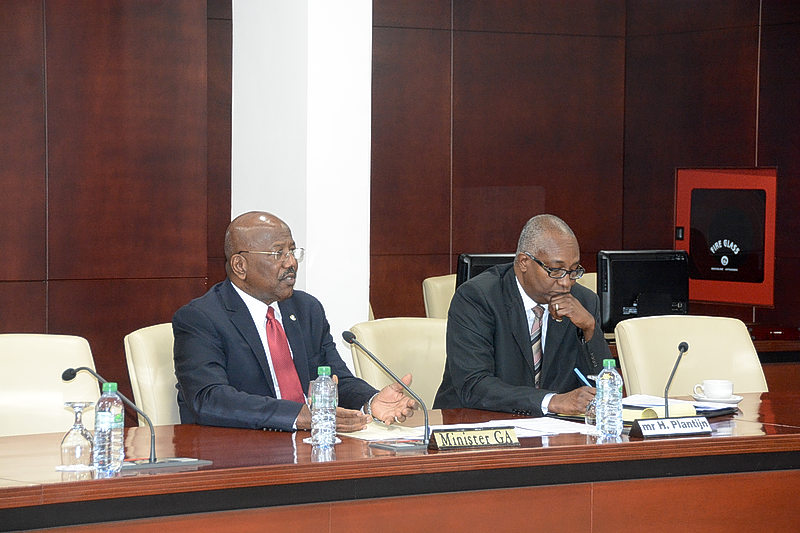 PHILIPSBURG–In his capacity as Minister of General Affairs, Prime Minister William Marlin was the last cabinet member to present his Ministry’s plans to Parliament’s Central Committee on Wednesday.

A review of the possibility to increase the pensionable age for civil servants from 60 to 65 years to be presented to Parliament is among the most eye-catching plans of the Ministry of General Affairs for this year.

To increase efficiency and to keep experienced members on board for a longer period of time Government also seeks to increase the pensionable age of members of the high councils of state from 70 to 72.

Under the heading of sound financial management, Marlin said the Ministry of General Affairs is to seek a reduction of cost in reviewing Government’s telephone and vehicle policies for civil servants. The Ministry also seeks to address high sick leave and unauthorized absence among Government workers.

To provide responsive public services and to promote awareness about citizens’ rights and obligations, Government is to start providing information to the public via its own radio and television stations.

Marlin said the radio station is already up and running, transmitting test broadcasts before its official launch in the near future.

In strengthening its services to the public Government seeks to further develop Government e-services. These are to include kiosks at the larger supermarkets at different locations for “easy” transactions of residents applying for driver’s licences, passports or permits.

Government will be making more use of the social media to provide information to the community. Its own website will be made more user-friendly. Residents will be able to request a driver’s licence, passport or permit by phone, laptop or computer, Marlin said.

Other plans include making legislation available in English and reviewing Government’s information and communication technology (ICT) process and organisation, including maintenance and security challenges.

Marlin said his Ministry is finalising a reform of the electoral law to enable students in the Netherlands, who are no longer registered at the Civil Registry, to vote in local elections. He said a proposal to this effect will be ready for debate in Parliament soon.

An initiative to address “ship-jumping” by Members of Parliament after elections will be put up for discussion during town-hall meetings to obtain feedback from the public, Marlin said.

The Post Office also falls under the responsibility of the Ministry of General Affairs. Marlin said meetings with management are scheduled for this week, while the unions are also involved in helping to solve the Post Office’s problems.

Marlin said Government is seeking to strengthen cooperation with international organisations, primarily in the region. In vowing to seek closer ties with French St. Martin, Marlin said an appointment has been made for a first meeting with President of the Collectivité Daniel Gibbs next week.

Marlin said the first initial talks concerning the land demarcation border between the Dutch and French parts of the island are scheduled for May 10 in Paris. A technical delegation will be travelling to France. “They will not be travelling to negotiate, but to set points of departure for negotiations,” said Marlin.

He said his Ministry is busy finalising legislation for the establishment of the Youth Employment Fund. An advice of the Socio-Economic Council is to be sent to the Council of Ministers for discussion.

Other plans for this year include the formal establishment of the youth fire brigade and “maximum use” of the Voluntary Corps of St. Maarten VKS.

Of the Ministry’s budget of NAf. 76 million, 4.3 million had been reserved for furnishing the new Government Administration Building. The purchase of new fire trucks and paying off approximately NAf. 1 million on the new ID-card machine are on the expenditure side of the Ministry’s budget.

The Central Committee meeting will reconvene, today, Thursday, at 2:00pm. During this meeting Members of Parliament will have the opportunity to comment and pose questions concerning the governing programme and the Ministries’ year plans.