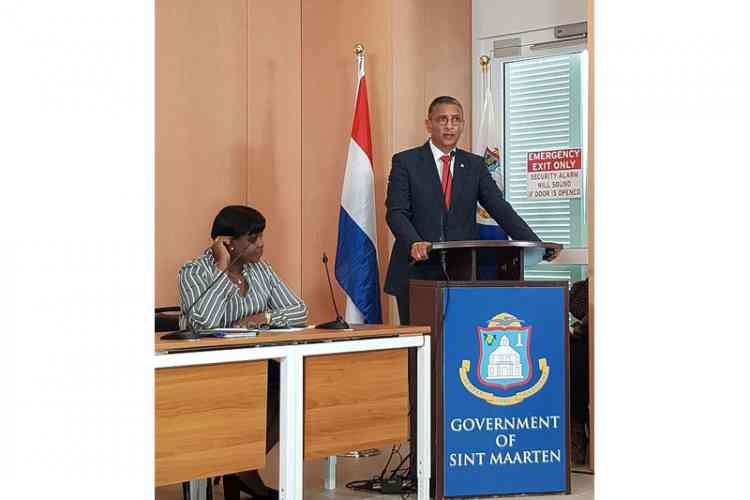 POND ISLAND–St. Maarten’s autonomy has been put at further risk, both from the Dutch government via instructions and the international community in the form of warnings to investors, with the parked and unapproved 2019 budget. This is the message the Council of Ministers communicated at a press conference on Monday morning about the stalling of the budget in Parliament on June 7.

Finance Minister Perry Geerlings was the one sounding the loudest alarm about the jeopardy to the country’s autonomy by leaving its direction to be steering by, among others, the Dutch government and the Committee for Financial Supervision CFT.

“As an autonomous country, we are jeopardising our own autonomy, because by continuing doing these things I am not surprised that the Dutch government and the CFT will continuously come down hard on us and come with conditions. We are the ones at times to blame as well. When are we going to start looking at ourselves and take our own responsibility,” questioned Geerlings.

“We are all complaining that the Dutch want to do what they want to do and want to impose their way on us [and] we are an autonomous country. But are we an autonomous country? … If this is the way that we carry on we are going to lose our autonomy, because we give it away to others who are going to dictate and it is not only the Dutch … the European Union can dictate to us. The American government can dictate to us … so don’t only focus on the Dutch,” said Geerlings.

There is no denying that government needs liquidity support from the Dutch, but that is not the only urgency related to the budget, he said. “The urgency is we have to stop begging for money with third parties. We, St. Maarten, have the potential to become a country that can carry its own load. But where are we going with infighting and hidden agenda business deals,” said Geerlings.

The draft budget has a NAf 70 million deficit. That means, according to Geerlings, there is no money for “cherry-picking” for individual projects.

Changes to the draft deficit budget sent to Parliament at the end of May are blamed for the stalling. Those changes are linked primarily to liquidity support from the Netherlands. “The Kingdom Council of Ministers may withhold liquidity support for the future” due to no approved budget, Prime Minister Leona Romeo-Marlin pointed out. The funds are needed for operational expenses – including government’s payroll and support for the police, fire and ambulance departments.

Romeo-Marlin together with Geerlings called on Members of Parliament to get to work on the budget and on the public make use of their democratic right to call on their elected representatives to resume handling the draft budget.

“Since there is no sense of urgency from some members of Parliament, I call on you, the public to activate your rights and voice your concerns to ensure the 2019 budget is handled within a timely manner in order to safeguard the essential functions of government and financial security of our dynamic economy,” said the prime minister.

Government’s main income is from single donor the Netherlands. “Whether we like it or not, that is the country that has been providing for us for the past two years … our salaries, your health care, your kids going to school, the road system … is all being funded with the help of the Netherlands. Don’t forget that,” said Geerlings.

There is a kingdom instruction pending from 2015 to fix the country’s finances. The social debt is almost NAf 1 billion. “And here we are trying to cherry-pick on meatless bone. There is not fat, there is not meat, there is only bone,” said Geerlings.

The prime minister said the postponement has grave consequences for the already dire economic situation of St. Maarten on which the impact of Hurricane Irma is still felt on a daily basis.

The recovery of the still-struggling Princess Juliana International Airport is very much tied to the budget. The loan government has committed to give the airport, totaling some US $50 million via the Dutch-financed recovery trust fund, requires an approved budget or no agreement can be entered into, the prime minister pointed out. The slow or stalled reconstruction efforts could lead to a decline in tourism guilders and slower economic growth.

No budget also means government will not be able to access its reserve capital investment funds needed to improve, among others, the financial management of the Finance Ministry and direly needed tax reform. Both are part of the overall financial recovery plan of the country, the prime minister told the press.

The most notable consequences of a parked budget, according to the prime minister, include non-access to earmarked funds to purchase land for the joint Dutch side-French side sewage treatment plant in Cole Bay and funds tied to the overall 10th European Union Fund sewage project.

The lack of liquidity will heavily impact the management of the dump, hurricane preparations, contributions to joint kingdom organisations such as the Coastguard and the Joint Court of Justice, the entire education system, and vacation pay for civil servants (including teachers) among others. Public safety will be jeopardised as police will not be able to guarantee protection at public events as well the benefits for prison guards, said the prime minister.

Parliament, after a vote on a proposal of order on June 7, has put off the budget handling indefinitely with the reason of requiring more time to read through changes submitted by government. The budget has been with Parliament since November 2018 and has passed through the Central Committee review.

The coalition in Parliament was short-handed to stop the postponement. One of its MPs, Dr. Luc Mercelina (United Democrats) voted with opposition MPs on stalling the budget. Another United Democrats MP Chanel Brownbill arrived at Parliament House when the vote was already taken, leaving the coalition with six votes against the proposal supported by eight other MPs.

Addressing the demand for more time, Geerlings said in the press conference “it would be really nice for those involved to really read what is being presented to them.” The Finance Ministry, he noted, “highlighted in yellow” all of the changes to the budget that “topped at some 15 pages only” that are different from the budget that has been pending since 2018.