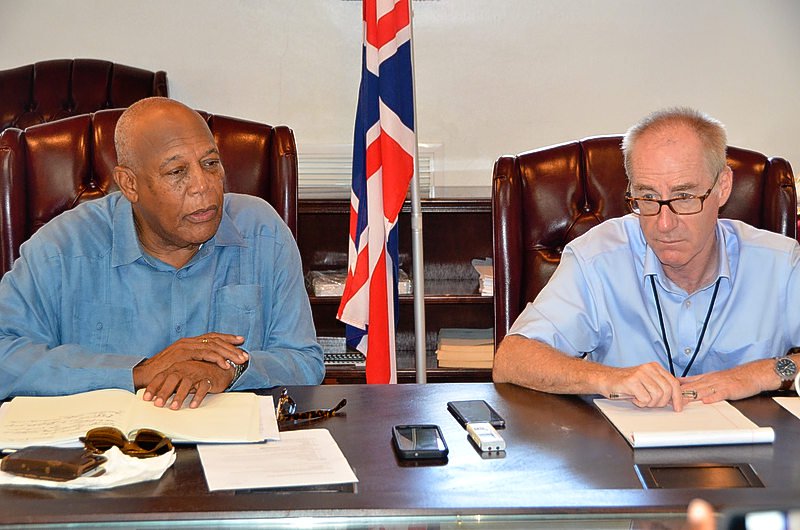 ANGUILLA–Governor Tim Foy and Chief Minister Victor Banks held a joint press conference on Tuesday, November 7, to provide an update on ongoing recovery actions post-Irma as well as take questions from the press. They both stated that they shared a desire to provide equal access of current and truthful information to all Anguillians.

Banks stated that he and the Governor had worked side by side as teammates since the day of the storm, during the relief period and now going into the recovery mode. They praised the first responders, neighbours and good Samaritans for their timely assistance to those requiring help immediately following the storm. They also thanked the UK for their prompt response and presence after Irma. Emergency medical care was available if needed, as well as food and water.

Anguilla demonstrated its very best in the face of a historic disaster causing extreme adverse damage to its infrastructure. Among the many achievements noted were the airport reopening within 36 hours to begin receipt of airlifted aid from the UK, the Cayman Islands and many neighbouring islands within the Organisation of Eastern Caribbean States (OECS), and the immediate initiatives to clean up the streets and neighbourhoods. The UK provided generators to all the primary schools and the high school, which enabled the schools to reopen in four weeks following Irma.

The Governor stated that he feels blessed to be in his current position, and that his responsibility is to the people of Anguilla. He stated that Anguilla is a uniquely special place, and he has great pride in the people of Anguilla and its government. Although Anguilla’s continuing recovery is remarkable, there is still a lot of damage that needs to be fixed. He commended the Anguilla Electricity Company ANGLEC management team for their brilliant success in sourcing additional personnel from neighbouring islands to assist with the repair of the electrical grid. The UK Government recognises that 60 per cent of Anguilla’s revenue is derived from the tourism industry, and that a complete island-wide functioning electricity system is key to rebuilding the hospitality tourism business. To that end, the UK Government has funded a contingent of 30 Canadian linesmen, five supervisors, six bucket trucks and two diggers brought into Anguilla within days to assist with the restoration effort.

The Chief Minister stated that he is grateful but impatient – grateful for all the assistance rendered to date by the UK Government, but impatient to source additional grant monies to counter the devastation caused by Irma and to sustain Anguilla as it rebuilds its infrastructure. Both he and the Governor continue to participate in discussions to this end with the appropriate UK Government officials in the foreign, treasury and national development offices. They will both attend the Joint Ministerial Committee Meeting in the UK during the last week of November where they will present their desired strategy framework for Anguilla’s recovery to the appropriate UK Government officials.