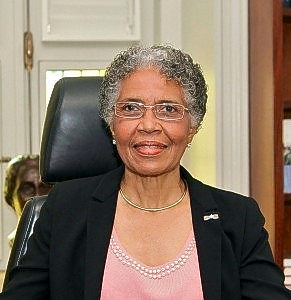 WILLEMSTAD-Curaçao Governor Lucille George-Wout on Wednesday morning met with the 11 Members of Parliament (MPs) who now form the new majority in Parliament.

During an emergency meeting called on their own Tuesday night this new “majority” adopted motions of no confidence against seven ministers in the Koeiman Cabinet of s MAN, PAR and PNP. Only the ministers of PS may remain in government.

A motion was also adopted for the appointment of a new president and vice-president of Parliament. A provisional speaker was chosen from their midst. Gilmar Pisas of the MFK was selected because he has served the longest in Parliament.

On Friday Parliament will be able to officially elect a new president during metin called by current President Giselle McWilliam (MAN). Norberto Ribeiro of “Kòrsou di Nos Tur” has been tapped for vice-president.

Only the 11 parliamentarians of the new majority attended Tuesday’s gathering. Besides the MAN, PAR and PNP members also Omayra Leeflang of one- seat “Un Kòrsou Hustu” ware not present

Meanwhile, Prime Minister Hensley Koeiman (MAN) convened an urgent news conference in which he said appears to be an unprecedented power struggle whereby the government must, at all cost, be overthrown.