Home Local News Governor: Some 80 per cent of hotel inventory ‘out of service’ 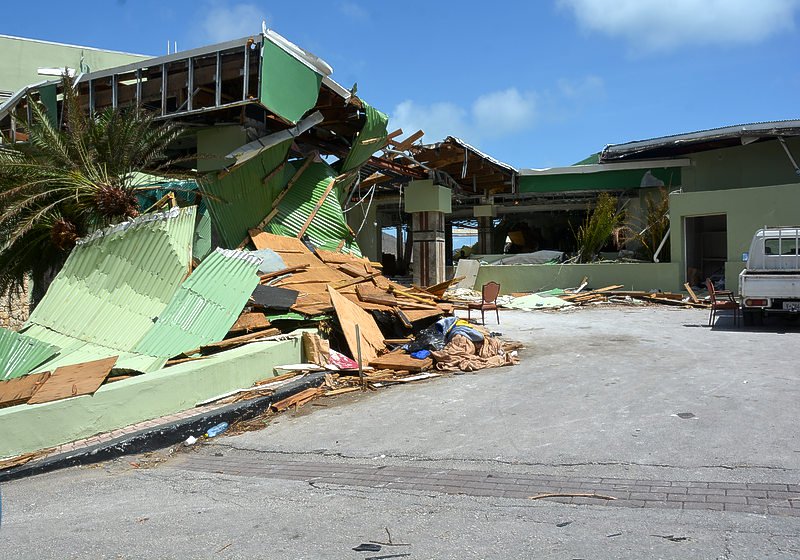 PHILIPSBURG–Some eighty per cent of hotel inventory is “out of service” following battering of St. Maarten by monster Hurricane Irma. Tourism is the life blood of the country and this news is an additional blow and translates into the loss of a tremendous number of the jobs in the tourism and hospitality sector.
Governor Eugene Holiday delivered government’s assessment of the country to Members of Parliament earlier today at the official opening of the 2017-2018 parliamentary year. The presentation of government’s policy plans “takes place against the backdrop of the devastating impact of Hurricane Irma.”
“Our critical infrastructure has been hard hit, but the good news is that vital services, such as the hospital is operating, and electricity and telecom are gradually being restored.”
Government moved to take stock of the damage and organize the emergency response right after Irma, he said.
That preliminary assessment shows the most of homes have been damaged, the hospital has suffered damage to its roof which has resulted in a decline in patient-intake capacity and the water distribution network is down, due to damage to the secondary lines and the water storage tanks.
The secondary lines of the electricity distribution network suffered damage and the main building of the headquarters of utilities company GEBE has been demolished.
Most of the 27 primary and secondary schools have suffered damage in varying degrees.
Princess Juliana International Airport and Air Traffic Control (ATC) facilities are not operational.
The telecommunication systems, fixed, mobile and data are partially operational with intermittent coverage.
Several major supermarkets have been damaged.
Given how critical these facilities and systems are for daily life, government has established a number of emergency priorities.
First, the maintenance of the security of the population: Government has established that this is essential to allow for an orderly restoration of daily life. To assist the local law enforcement officers, government intends to continue to maintain the security support as provided by the Dutch military, police officers from the Netherlands, Aruba and Curacao and the Aruban and Curaçao Militia.
Government is setting up distribution networks to supply those who need with water, food, medicine and evacuation of persons. Government also intends to have supermarkets and pharmacies reopened as soon as possible.
The clean-up of the debris, created all over the island by hurricane Irma is vital.
According to the Governor, government is putting a plan in place to realize a speedy return to school of the country’s 8,000 students, with concentration on the exam classes.
Securing building materials is critical to provide for a quality rebuilding of the country. This is also an area government is working on.
Securing of budget support will be required for the remainder of 2017 and fiscal year 2018. This is needed because it is expected that the 2017 budget and the recently presented 2018 budget will record deficit. Those budgets no longer reflect the current environment and deficits will have to be offset by grants and/or borrowing. Government will present Parliament with an emergency budget within short.

Speaking of the post-Irma situation, he said, “Today, we stand in the aftermath of the ferocious winds of hurricane Irma and I am moved by the extent of the material damage and of the emotional toll Irma inflicted on our people. This hurricane will as a result forever live on in our collective memory.”
The Governor was “heartened” to see so many persons, in good St. Maarten tradition, cleaning up their districts and helping each other. However, he was saddened to see “the unlawful behaviour of some in our community. Behaviour, which clearly do not do justice to who we are as a St. Maarten people. Behaviour that has only made matters more difficult for all of us.”
“As we face this new reality we can do so with the knowledge that we have been down this road before and we overcame … Government believes and is committed to implementing policies and plans that would not only lead to recovery but which will also better prepare the people of St. Maarten to withstand hurricanes like Irma,” he said.
The closing of the 2016-2017 parliamentary year and the opening of the new one were held behind closed doors in the Government Administration Building on Pond Island. The recording was later played on the radio station with some commentary from Parliament Chairwoman Sarah Wescot-Williams.