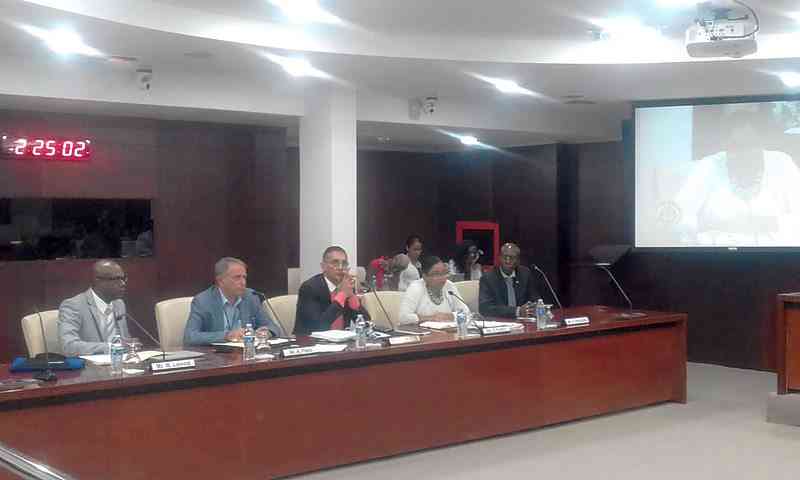 Members of Parliament during Wednesday’s meeting.

PHILIPSBURG–The Council of Ministers last week approved the draft pension reform legislation, which includes increasing the pension age from 62 to 65 and lowering the pension premiums paid collectively by employers and employees.

Finance Minister Perry Geerlings told Members of Parliament (MPs) during a meeting of Parliament’s Finance Committee on Wednesday that the draft legislation should be tabled in Parliament probably some time later this month.

“It is almost ready to send to parliament … maybe even before the end of this month,” Geerlings told MPs, stressing the importance of the document being approved this year.

A major highlight of the draft legislation is that persons will be able to join the pension fund at the age of 18 instead of the age of 25, which is currently the case. The draft also proposes that the premium be reduced to 18 per cent from the current 25 per cent. The provisions for part of the premium to be paid by the worker and part by his or her employer will remain.

The draft also includes a crisis plan (in Dutch: herstelplan) of what should be done in the event that the 18 per cent premium does not cover cost.

MPs were told that the draft legislation had been extensively discussed and negotiated with unions, which have agreed to the draft. “That helps a lot,” Geerlings said, adding that APS is willing to assist to accelerate the process. He said also that authorities are trying to put mechanisms in place so that once the legislation has been approved by parliament, it can be executed. “We are prepared,” he said.

Croes-van Putten stressed the importance of having the legislation handled before the end of the year, as its introduction is factored into the 2019 budget.

To come up with the draft legislation, a project was formed with participation of the ministries of General Affairs and Finance. In collaboration with APS, there was intensive cooperation with unions and with the assistance of an independent actuarial expert, the existing pension system was reviewed and modernised.

A very important milestone was a unanimously-supported redesign written in understandable language. This redesign has been translated into adjusted legislation that has been reviewed by the Council of Advice and approved by the Council of Ministers. The Ministry of Finance was involved to guard the effects of alterations to government finances seen in the consequences on the budget (mainly on personnel cost).

Wednesday’s meeting was the continuation of a meeting held in August on the subject “discussion on the effects of [Hurricane – Ed.] Irma on the pension fund and an update on the fast tracking of projects post-Irma.”

During the meeting MPs, APS representatives and Geerlings discussed a number of issues related to the topic.