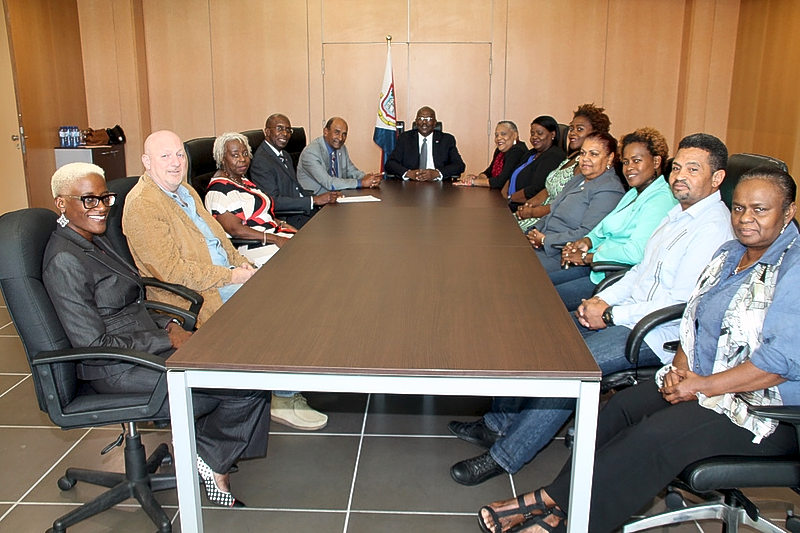 The agreement comes after months of social dialogue and close to 30 meetings amongst the parties involved. Now that an agreement has been reached amongst the parties legislation on the reform will be drafted, which will have to be approved by the Council of Ministers before being tabled in Parliament for debate and approval.

Windward Islands Civil Servants Union (WICSU) President and member of the advisory body on matters related to civil servants Claire Elshot, who spoke at the signing ceremony on behalf of unions, said the unions had been able to accomplish some key things for their membership during the social dialogue. She called the occasion a milestone.

According to Elshot, in the past changes were made unilaterally by the pension fund management and then handed down to the unions. In the process leading up to the reform, a work group had been formed which met some 28 times. The input was sought from an actuary and other professionals in the field on the issues that were discussed.

Elshot said the reform is important to guarantee that civil servants would get their pension when they reach pensionable age in the future. She said also that it had been long overdue.

Secretary of the APS board Kendra Arnell said parties worked for months to come up with ideas on how to make the pension plan more sustainable, affordable and modernised. The reform will help update legislation dating back to the 1920s and make it more appropriate for the 21st century.

Chairman of APS Board Franklyn Richards said the agreement reached can help to “bring some ease in all our hearts.” He said pension funds around the world are suffering, though APS is different because it has a low coverage ratio. He said also that persons are living longer, are healthier and stronger and therefore the pension fund has to adapt itself to ensure that those who are entitled to their pension in the future receive it.

Finance Minister Richard Gibson said St. Maarten had been confronted with “a serious situation” with its pension fund. It was under the pressure of persons living longer and the structure of pension fund no longer lived up to the requirement to guarantee that people who are living longer will be able to get their pension “at the dawn of their lives.”

The situation was so serious, he added, that it took an instruction from The Hague to St. Maarten to take steps to ensure that the pension fund is more sustainable. Commending the persons involved in the process, he also said that all issues the country is confronted with should be addressed similarly as this was – through social dialogue.

Prime Minister William Marlin said the reaching of the agreement was the result of a lot of hard work. Now that an agreement is in place, he said, the issue needs to be put into a legislation that has to be approved by the Council of Ministers and then go on to Parliament. He too commended the persons who had been involved in the process.