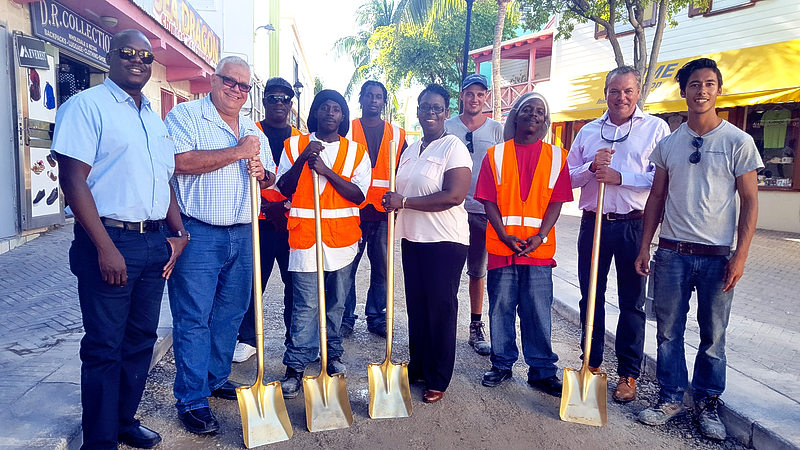 She also received an update on the project from Claudius Buncamper of the Ministry of Public Housing, Spatial Development, Environment and Infrastructure VROMI and was joined by Windward Roads Director Jan-Hendrik Boekaar.

This is the second time in two years that a TEATT Minister has broken ground and initiated talk of works for Back Street. According to a press release from TEATT’s cabinet, the Back Street project is a joint project between the Ministries of TEATT and Public Housing, Spatial Planning, Environment and Infrastructure VROMI, is being financed by the TEATT Ministry and executed by main contractor Windward Roads.

The bricks in the road will be removed and the road will be paved. Buncamper explained that the road will remain open for pedestrians at all times and to emergency vehicles. VROMI has also made it possible for residents and businesses to connect sewage lines at their own expense while the project is ongoing.

The drainage on the road will be regulated to eliminate water accumulation in pockets. Barring any setbacks, this phase of the project should be completed in May. Arrindell-Doncher noted that the project is not just important for business activity and residents, but also provides work for young men in the community.

“I am from the Philipsburg area and it was good to see some of the young men I know working on this project. It’s important that they are afforded the opportunity to participate in general interest projects, in particular those in districts where they reside,”she said.