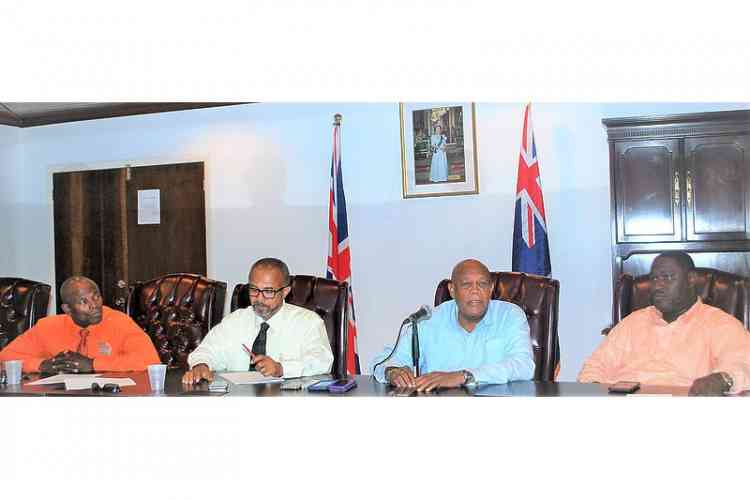 ANGUILLA–Chief Minister Victor Banks began the government’s press conference by offering condolences to the family of the late Leroy Clifford Rogers, who served as the island’s Speaker of the House of Assembly for many years.

Banks highlighted some of the week’s top items on the government’s agenda. He referred to the launching of the Anguilla Health Authority Foundation as a critical project for the advancement of the delivery of health care services in Anguilla as it will take on board persons who live outside the island and are friends of Anguilla who are interested in supporting its health initiatives. He complimented Minister of Health, Evans McNiel Rogers for his ceaseless efforts to put this initiative together which will improve both health care delivery and facilities.

Banks said the Anguilla United Front (AUF) had held its convention on November 3-4 and elected new officers to the committee. Although Cora Richardson-Hodge is now deputy political leader, Banks made the point that Rogers was not leaving the party as he continues to serve as Minister of Health and Lands.

Rogers said the official opening of the Princess Alexandra Hospital’s new and refurbished male, female and paediatric wards would occur on November 22. He noted that the expat community in Anguilla had been very supportive and generous in assisting with health care improvements. He also thanked the British government for its support, as well as the local population for coming together to support the rebuilding efforts.

Parliamentary Secretary of Tourism and Sport, Cardigan Connor reported that many of the larger hotel properties as well as the boutique hotels and villas had reopened or were planning to do so shortly, as well as the many restaurants across the island. Visitors are returning and season bookings are robust. He ended by appealing to everyone to be proud of their island and do their part in keeping Anguilla litter-free. He noted that government would do its best to enforce the Litter Abatement Act in the coming weeks.

Minister of Infrastructure, Curtis Richardson began his portfolio update by first expressing condolences to the family of the late Anguillian Calypsonian Dynamite. He provided updates on efforts to address street-lighting issues as well as on the renovation status of Anguilla’s temporary seaport arrival/departure facility and pedestrian walkway which will replace the current tent area and will be used while the new port facility is constructed. He also intends to look into ferry berthing complaints at the St. Maarten airport ferry terminal by the Anguilla ferry owners servicing that port.