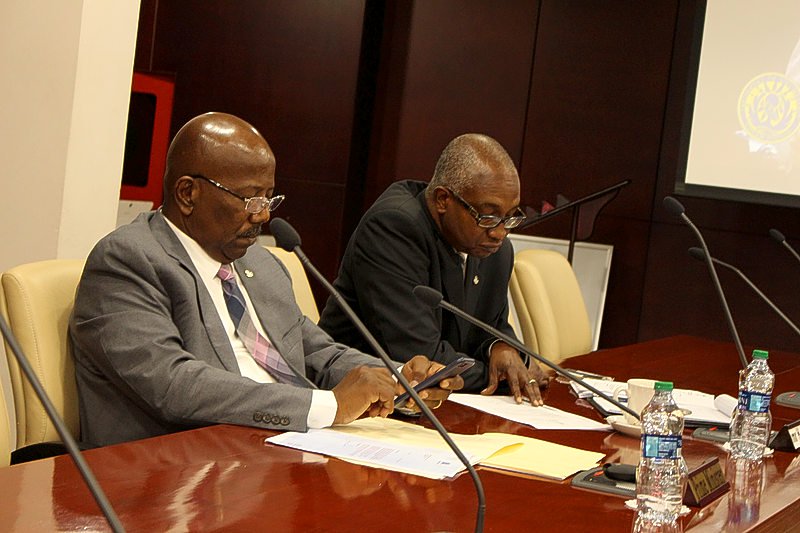 PHILIPSBURG–Based on a suggestion from the Central Voting Bureau, the Council of Ministers will meet today, Friday, to decide on changing the date on the national decree to dissolve Parliament.

During today’s meeting the Council is also expected to discuss the emergency roof repair programme. Government has already approved NAf. 3 million towards this programme and more than 300 roofs will be fixed before Christmas under the programme, starting tomorrow, Saturday.
The changing of the date of the decree to dissolve Parliament is expected to eliminate many of the “bottlenecks” that currently exist with the setting of elections for January 8, Prime Minister William Marlin told Members of Parliament (MPs) on Thursday. “We have been advised by the Central Voting Bureau to change the date on the decree to avoid a conflict,” said Marlin.
The conflicts include the stipulations in the Electoral Ordinance stating that the voters register has to close three weeks prior to Nomination Day (Postulation Day). As the decree was signed on November 3 and Nomination Day is November 13, this means the required three weeks are not available and the voters register is already closed by default.
Another conflict Marlin highlighted is the fact that new political parties are automatically barred, as they will not be able to register to participate in the elections because registration with the Electoral Council has to take place three weeks in advance.
“So, there are several issues that conflict with the constitution and the Electoral Ordinance,” Marlin said. “On Friday [today – Ed] the Council of Ministers will meet to take a decision on the necessary adjustments to avoid any conflicts. … If we postpone the date on the decree to fall in line with the constitution and the electoral laws, then it would mean that there would be no Postulation Day on Monday and some of the issues that today, if we were to hold elections on January 8, that form a bottleneck, those bottlenecks would be removed.”
In the meantime, Marlin said, the Head of the Department of Civil Registry (Census Office), with whom he had met about some of the concerns they had, prepared and submitted a plan of approach related to the concerns. Marlin had asked the department head to prepare a plan of approach on how to address the bottlenecks that exist.
“That plan of approach was received this morning [Thursday – Ed.]. I have not been able to review it in its entirety,” Marlin said.
He also said the Ministry of Public Housing, Spatial Planning, Environment and Infrastructure VROMI had begun Wednesday to prepare a location at the Department of Civil Registry for activities related to Nomination Day. He said part of the Receiver’s Office had been damaged during Hurricane Irma, but the former Census Office was still intact and was being prepared to accommodate political parties that wanted to submit their lists and, if necessary, for endorsement of lists.
With respect to concerns as to how voting cards would be delivered, as many persons have been displaced and might not be at their regular addresses, Marlin said his proposal is for the Census Office to coordinate days and specific times prior to election when persons can pick up their voting cards at the polling stations where they normally vote, using their identification. This, he said, would eliminate the bottleneck of having to mail voting cards out and persons not receiving theirs.
Some of the legal discrepancies that exist are something Parliament and/or Government can address after the election.
Following Marlin’s introduction, Democratic Party (DP) MP Perry Geerlings at length questioned Government’s move to dissolve Parliament. Calling the decision a hasty one, he said the challenges that have developed will fall upon the new Government. He said a large portion of the population does not want new elections at this stage.
Geerlings also admonished Marlin, saying he should have fixed the problems before he signed the decree to dissolve Parliament. “Yes, article 59 is a weapon against a rogue Parliament, but at the end of the day it is the Parliament that keeps the checks and balances in place,” Geerlings said.
He then read out a motion stating that MPs disapprove of Government’s decision to dissolve Parliament and “hold premature elections.”

Adjourned
Following Geerling’s presentation, Chairperson of Parliament Sarah Wescot-Williams said Marlin had informed her that he needed to “attend to a very urgent matter” and asked the indulgence of Parliament to adjourn the meeting and allow him to do so. She later said the urgent matter was that Marlin had to meet with Governor Eugene Holiday.
Wescot-Williams then adjourned the meeting for half an hour. More than an hour later she resumed the meeting and said Marlin had contacted her and indicated that he would not be able to make it back for the meeting before Thursday evening. She adjourned the meeting again and said it would resume at 10:00am today, Friday.
However, Marlin said he informed the Parliament Chairperson that he would not be able to make the morning meeting due to an urgent Council of Ministers meeting that had already been scheduled for this morning.
Marlin said in a press release issued late Thursday that he had to suddenly leave the meeting of Parliament for an urgent meeting with Holiday. He said the Parliament meeting had been adjourned for 30 minutes and as his meeting with Holiday lasted much longer, he informed Wescot-Williams that he could not return to the meeting until late in the evening.
“Without consulting the Prime Minister, the Chairlady then adjourned the meeting to 10:00am Friday. The Prime Minister then informed her that he could not attend then either, but would be able to do so at 2:00 in the afternoon.”
Having the Deputy Prime Minister attend at 10:00am instead is not an option either, as there will be an urgent meeting of the Council of Ministers on Friday morning, Marlin said in the release. “During that meeting the amended version of the draft Integrity Chamber Ordinance will be handled as well as the joint cooperation agreement on border control, Customs and Immigration. Both the Prime Minister as well as the Deputy Prime Minister/Minister of Justice are supposed to be in the meeting.”
Marlin said as soon as the amended draft Integrity Chamber Ordinance is accepted by the Council of Ministers it will be sent to the Governor to submit to Parliament for approval. He said it is then up to Parliament to have a debate on the draft and vote on it as soon as possible.