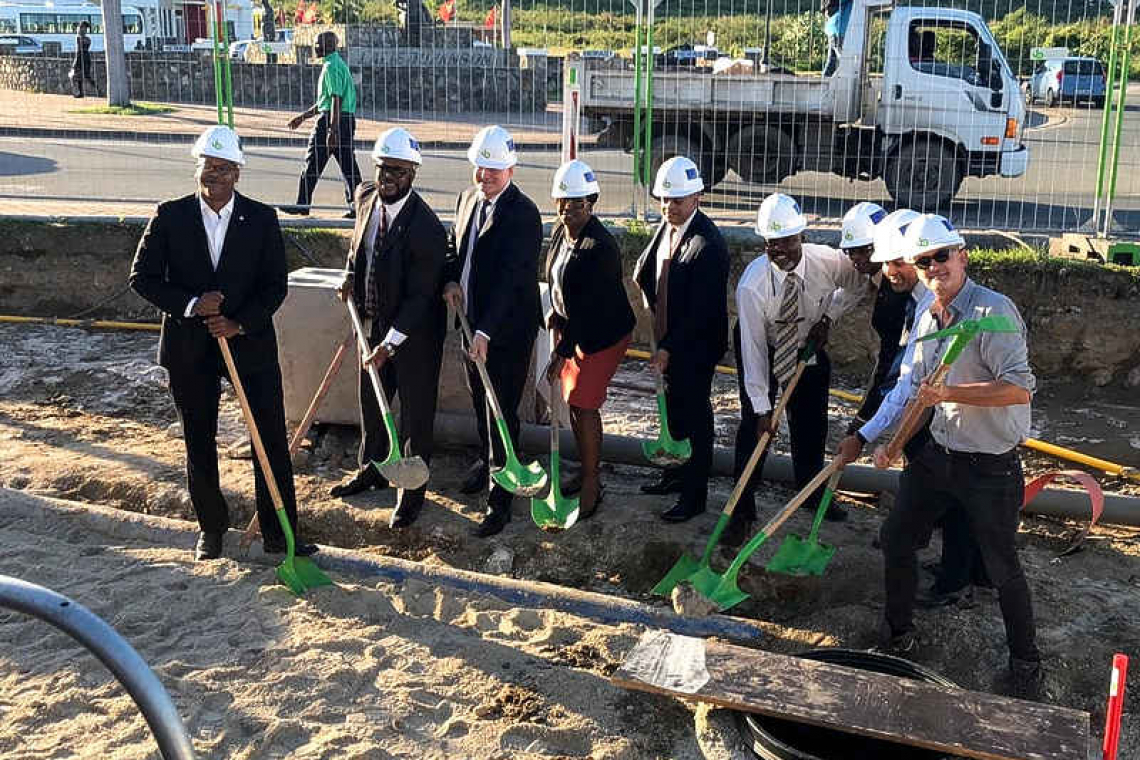 The ground-breaking ceremony for the Dutch Quarter sewage project on October 24, 2018. (File photo)

PHILIPSBURG–Country St. Maarten will have to pay Netherlands-based construction company Van Boekel Bouw and Infra BV 370,926 euros and 3.346 euros, with monthly interest payments of 3.5 per cent, plus the legal costs of summary proceedings, which were estimated at NAf. 11,797, also with legal interest. The Court of First Instance decided this in an injunction filed by the contractor against the government of St. Maarten for non-payment of invoices for the Dutch Quarter sewerage project.

Van Boekel claimed 1,3 million euros in damages, plus payment of 370, 926 euro in unpaid invoices with 3.5 per cent “contractual” interest, “running costs” of 16,082 per week, general overhead costs of 12,368 euros per week and lost profit of 4,122 euros per week and requested the court to allow a change to the building contract. Attorney-at-law Richard Gibson Jr. contradicted the claims on behalf of country St. Maarten.

On August 21, 2018 parties signed a contract for the Dutch Quarter sewerage project to the tune of 4,287,680 euros. The project was financed by the European Union’s Economic Development Fund (EDF) for the amount of four million euros.

The project, which officially kicked off October 24, 2018, comprises the expansion of the sewer network including home connections and connection to the main sewer line, upgrading of the side roads and improvement of the overall

drainage system in Dutch Quarter, improvement of public street lighting and related works and the construction of sidewalks

The invoices for the project submitted by Van Boekel, represented in the summary proceedings by attorneys

Jojanneke Deelstra and Max Janssen, were to be paid within 90 days. Work on the project started August 5, 2019 and was supposed to be finished after 12 months.

From November 1, 2019 until February 20, 2020, Van Boekel suspended the work because country St. Maarten had failed to pay for extra labour amounting to 584,933 euros. Work was not to be resumed until an amicable solution was reached and the contractor received 515,000 euros.

In a Memorandum of Understanding (MOU), the Ministry of Public Housing, Spatial Planning, Environment and Infrastructure VROMI and the Department of Interior and Kingdom Relations BAK confirmed to Van Boekel that an additional amount of about 1.3 million euros was specifically allocated to the Dutch Quarter Sewerage Project in the approved 2019 budget.

Under the MOU, parties also agreed to extend the project deadline by a maximum of 20 weeks until October 30, 2020. This extension of the so-called implementation period was without additional costs for or claims by both parties.

Work on the project was suspended for a second time on July 30, 2020 and has not been resumed since. By letter of July 16, 2020, Van Boekel reported two late payments to the government of St. Maarten, adding that the company is entitled to suspend works when invoices are 30 days overdue.

Two weeks later the construction company informed the government that it did not receive any response or payment of the overdue invoice for 540,750 euros. “As contracting authority has not fulfilled her contractual obligation, we see no other alternative than to suspend our work and wait until contracting authority has fulfilled all her obligations.”  As a result, Van Boekel instructed its “local team” to inform subcontractors and to stop activities on site immediately.

By letter of October 6, 2020, VROMI responded with an appeal to “force majeure” in connection with the COVID-19 pandemic. However, according to the ministry the remaining available budgets were deemed sufficient to complete the project.

On December 30, 2020, parties held a meeting in an effort to get the work back on track and settle their differences. According to the unsigned minutes of this meeting, the Finance Department was to be requested funds to compensate Van Boekel in January 2021. However, on January 18, VROMI cancelled a meeting during which Van Boekel’s “revised overall planning” of the project was to be discussed, without giving any reason.

The EU has approved an extension of the agreement until September 16, 2021. The contractor says it still needs nine months to finish the project, plus a start-up period of at least one month.

In the court’s preliminary judgment, St. Maarten may not make the fulfilment of its unconditional obligation towards Van Boekel dependent on effectuation by the EU.

“Van Boekel is not a party to this, and the EU is not a party to the agreement. The EU has only signed the agreement for the purpose of financing. It is the responsibility of St. Maarten to comply with the conditions of EU funding. If the EU does not pay, this does not affect government’s own commitment to Van Boekel. The fact that Van Boekel knows that St. Maarten is predominantly dependent on this financing does not change that,” the judge stated in the verdict.

The court did not award Van Boekel’s full claims – not because the court is of the opinion that payment of damages should not be awarded -, but because the government’s interests in this stage of the proceedings weigh heavier than Van Boekel’s.

Although it may be derived from the MOU that the government would provide an additional budget of 1.3 million euros, it turned out in December 2020 that this was not taken care of. This amount is separate from Van Boekel’s damage claim to the same amount.

“With a probability bordering on certainty, the government will not have made any reservation in the budget for this. Awarding 1.3 million euros in damages, or a substantial advance, will simply ruin the country’s finances. For the time being, country St. Maarten will have to be given some time and opportunity to find cover for this,” the judge said.

According to the court, convicting country St. Maarten to pay 1.3 million to Van Boekel would be “disastrous” for the project and not in the interest of Dutch Quarter residents. In the court’s preliminary judgment, these interests will only be served if parties negotiate further about the implementation of the agreement, so that the Dutch Quarter sewerage project can be “smoothened out” and parties settle their disputes.