Home Local News Govt. representative Helmond reflects on freedom on May 4 | THE... 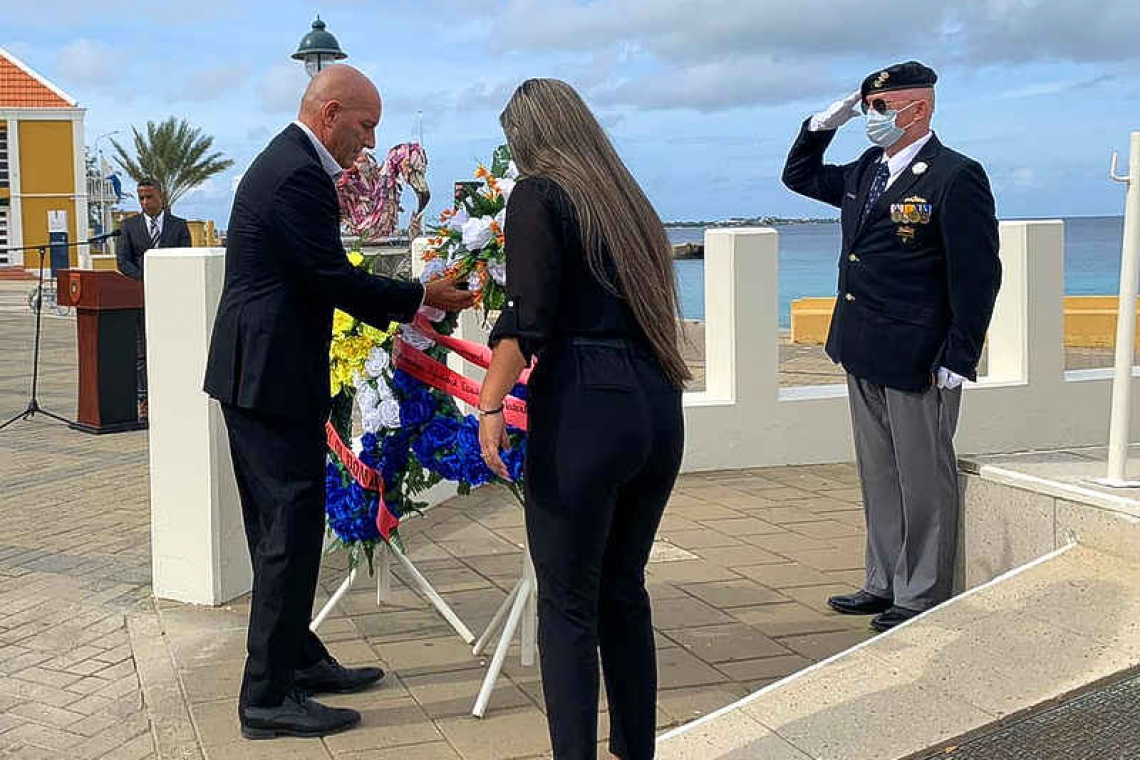 Dutch Government Representative in the Caribbean Netherlands Jan Helmond (left) laying a wreath at the war memorial in Kralendijk, Bonaire.

SABA/ST. EUSTATIUS–Dutch Government Representative in the Caribbean Netherlands Jan Helmond wondered what freedom really means in front of a small party gathered in Bonaire on Tuesday, May 4, to commemorate the victims of World War II and the victims of conflicts, wars and peacekeeping missions.

Every year, the National May 4 and May 5 Committee chooses an overall theme for the commemorations organised throughout the Dutch Kingdom, including in Bonaire, St. Eustatius and Saba. This year, the theme was “The Foundation of Freedom”.

“Freedom: what does this actually mean? Does freedom mean you can go wherever you please, that you can think and say anything you want? Everybody has his own idea of freedom,” Helmond told his audience.

The vulnerability of freedom and the fact that freedom cannot be taken for granted have become acutely clear during the COVID-19 pandemic, he said.

He said that sometimes the measures taken by those in charge during the COVID-19 crisis are perceived as unpleasant, inconvenient and sometimes incomprehensible.

“It feels like a freedom restriction we do not wish to accept. Sometimes, this is because we want to lift the restriction because it makes it impossible for us to meet our friends or family in the way we are used to. Sometimes, because a road or beach is closed, we cannot celebrate an important holiday in the way we normally do, [and] sometimes because we are simply not used to having our freedom restricted. Yet, we have to respect and comply with the measures, even though we do not always understand them.”

Helmond said that, at the same time, it is essential to realise we live in a society where the people in charge are also supervised by the Dutch Parliament’s First and Second Chambers, city councils and the island councils.

“This is a foundation of freedom too, a foundation in which it has been stipulated that a person in charge cannot restrict our freedom just like that. Such foundation entails that those in charge and everybody in society realise that these restrictions to freedom cannot and should not take longer than necessary, that we have open and respectful discussions at those places that are officially intended for these discussions to take place.”

“To me, this system – in which it is safeguarded that a government can only interfere in exceptional situations and that this government is supervised by representatives of the people – is currently the most striking example of a foundation of freedom. Fortunately, we can regain this freedom one small step at a time. Perhaps we learn to appreciate the freedom we actually had in this COVID-19 period.

“Let us be there for each other, especially now. Let us realise that peace and freedom should never be taken for granted, that we have to continue to work together on peace and freedom. Let us commemorate together, in mutual solidarity, every individual with his or her own recollections and thoughts.”