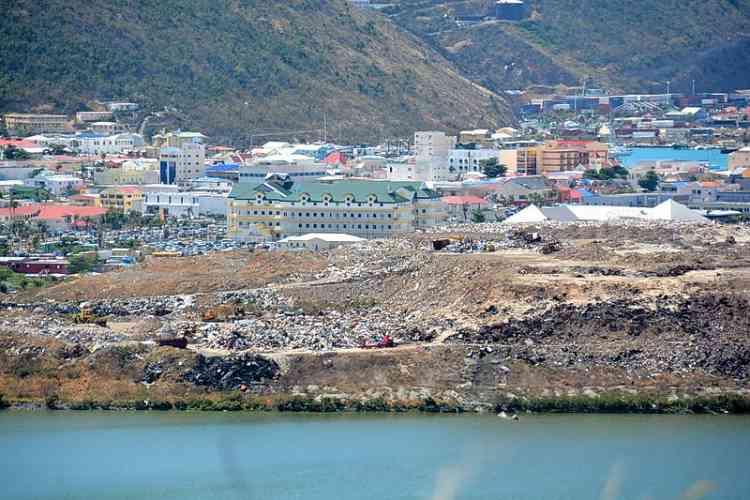 Overview of the landfill dumpsite on Pond Island.

PHILIPSBURG–There is still unlawful nuisance and the odour at the sanitary landfill must be removed. Country St. Maarten considers itself committed to the Fire Suppression Plan but does not want to commit itself to a specific date. Without pressure on the government, this plan will probably never be implemented, just as no other government plan pertaining to the dump has been completed in recent decades. Plaintiffs Barbara Cannegieter, Camiel Koster and BZSE Attorneys at Law and Tax Lawyers say this in response to Country St. Maarten’s appeal pleadings in the so-called dump case. They call upon the Appeals Court to uphold the verdict and say that St. Maarten has filed an appeal “for incomprehensible reasons.”

Country St. Maarten has filed an appeal against the Court of First Instance’s order to finalise the Fire Suppression Plan at the landfill dumpsite on Pond Island by May 1, 2020, at the latest.

In case of non-compliance government will have to pay daily penalties of NAf. 10,000, with a maximum of NAf. 10 million, the Judge had stated on July 26.

In the appeal case, Cannegieter and the other claimants maintain that garbage of all shapes and sizes, including chemical and electronic waste, is still being dumped at the landfill.

“There is no question of recycling or separating waste and no nuisance-law permit has been issued for the dump or its management,” BZSE lawyers Jelmer Snow and Koster state in their written response to government’s appeal pleadings.

According to plaintiffs, the government made many plans in the past decades to solve the problems at the dump. “Reports have been written about all kinds of alternatives, including a combustion installation and a waste-to-energy plant. None of those plans has ever been implemented,” they said.

“Now, Country St. Maarten has a new plan, as included in the Action Plan Fire Suppression. It says that it is committed to implementing this plan, just as it said in the past that it would implement the plans then … It is, therefore, not surprising that Cannegieter et al listen to the current plans and their implementation with a justified dose of suspicion,” attorneys Koster and Snow said.

Claimants maintain that it is undisputed that the dump is still smothering “continuously” and is burning underground. They also state that it is undisputedly proven from the report that has been submitted by the National Institute for Public Health and the Environment RIVM in the Netherlands that also when there are no blazing fires “the odour nuisance that people experience can cause health problems, such as nausea and headaches.”

In spite of all fire prevention mentioned by the government in its statement of complaints, such as covering with “fill” or “alternative daily cover” and better landfill management, RIVM believes that there is still nuisance by odour that may cause health problems, the lawyers said.

In a 30-page petition to the Court of Appeals of September 6, attorney Caroline van Hees of Gibson and Associates made it known that Country St. Maarten is in total disagreement with the lesser court’s ruling.

According to the government, this case should not have been handled in summary proceedings and Country St. Maarten was wrongly convicted. It claims that there is no illegitimate nuisance or damage at the dump and states that damages were wrongly imposed.

Government believes that the case should have been rejected as matters have improved considerably at the dump. In 2018 there were no fewer than 32 large and medium-size fires at the dumpsite. Thanks to measures taken by government in 2019 that number has been reduced to only one fire in May, which was put under control within a couple of hours.

According to the government, the Court has underestimated the complexity of tackling the issues at the dump. Words such as “manageable” and “ticking time bombs” are indications that the Court has used the incorrect framework in judging this case.

For example, the Court of First Instance should have taken into account that extensive and very expensive measures have been taken and that the nature, duration and seriousness of the nuisance have become virtually zero.

Government also objects to the imposed deadline of May 2020, as it maintains that the entire Emergency Debris Management Project could be delayed for reasons beyond the government’s control.