Home Local News Gracita leaves UP due to lack of leadership 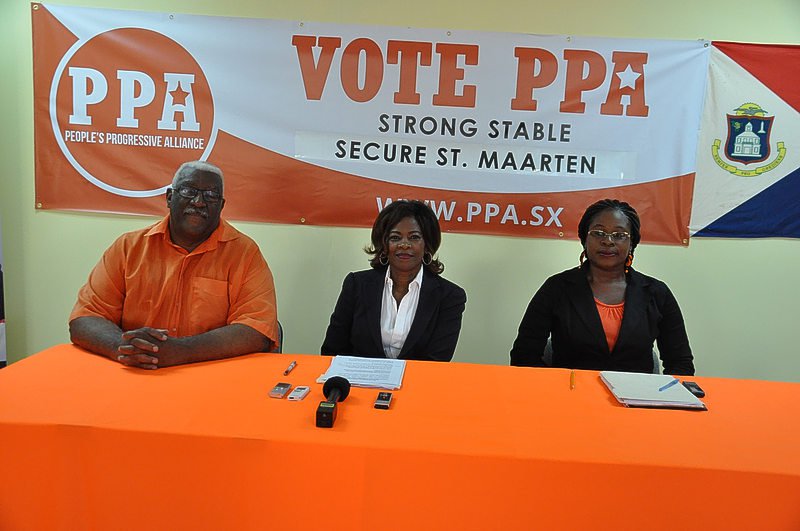 ~ To contest election under PPA ~

PHILIPSBURG–People’s Progressive Alliance (PPA) party leader Gracita Arrindell says she resigned from United People’s (UP) party in 2015 due to the party’s lack of leadership, its failure to live up to its commitments and its turning its back on the people.

Arrindell declined to go further into the matter at a press conference on Monday, saying the past should be left in the past and the people of St. Maarten are not interested in melee.

Arrindell will be contesting the September 26 parliamentary elections on the PPA slate, which she said would be focussed on regaining the people’s trust.

PPA started as a party in 2003, when Arrindell was elected and held a seat in the Island Council of the former Island Territory of St. Maarten from 2003-2007. PPA lost its seat in the 2007 election. Arrindell said PPA had been approached in the summer of 2010, asked and decided to work with UP.

She said it had been a critical stage in St. Maarten’s constitutional history as 10/10/10 was “at our doorsteps.” The majority of the PPA board and candidates supported that step at the time. She said the party had delivered to the best of its ability under that umbrella, as members of the legislative branch of government.

She resigned from UP in November 2015 and PPA was registered in the National Gazette as a political party on June 20. The party’s goal is to have a “strong, stable and secure” St. Maarten, the party’s slogan for the elections.

She said PPA’s campaign would not be based on bashing anyone, but would be different and would be focussed on leadership and regaining the trust of the people.

Asked whether PPA would work with a party whose slate has a candidate who had been convicted, she said PPA would make that decision when the day came. She said too that everyone deserved a second chance.

Arrindell said PPA’s main message would be one of inclusion. She said many people felt “left out” and PPA wanted to change this. The party has “a workable plan” aimed at having an inclusive development starting with what is locally available, creating a strong and stable St. Maarten where people see opportunities and common grounds to share ideas and programmes for the benefit of the community.

“We agree with many that the unsteady state of our island is unacceptable and unbearable. We cannot create a state of wellbeing after six years into this new status if insecurity and stress among our people has increased, just as the percentage of people living in poverty has increased,” she said.

“The programme that we are working on is based on social inclusion and new economic value, a programme based on fairness and competition, a programme that has the capacity to create economic value for everyone in this community from people living in the so-called poverty corridors to the middle class and the more affluent among us, a programme that recognises the real texture of this island and stimulates the pivotal role of our tourism industry – our main industry.”

A draft of the party’s programme has been completed. It first has to be discussed within the PPA and it will be released by the end of July.

Source: Daily Herald
Gracita leaves UP due to lack of leadership