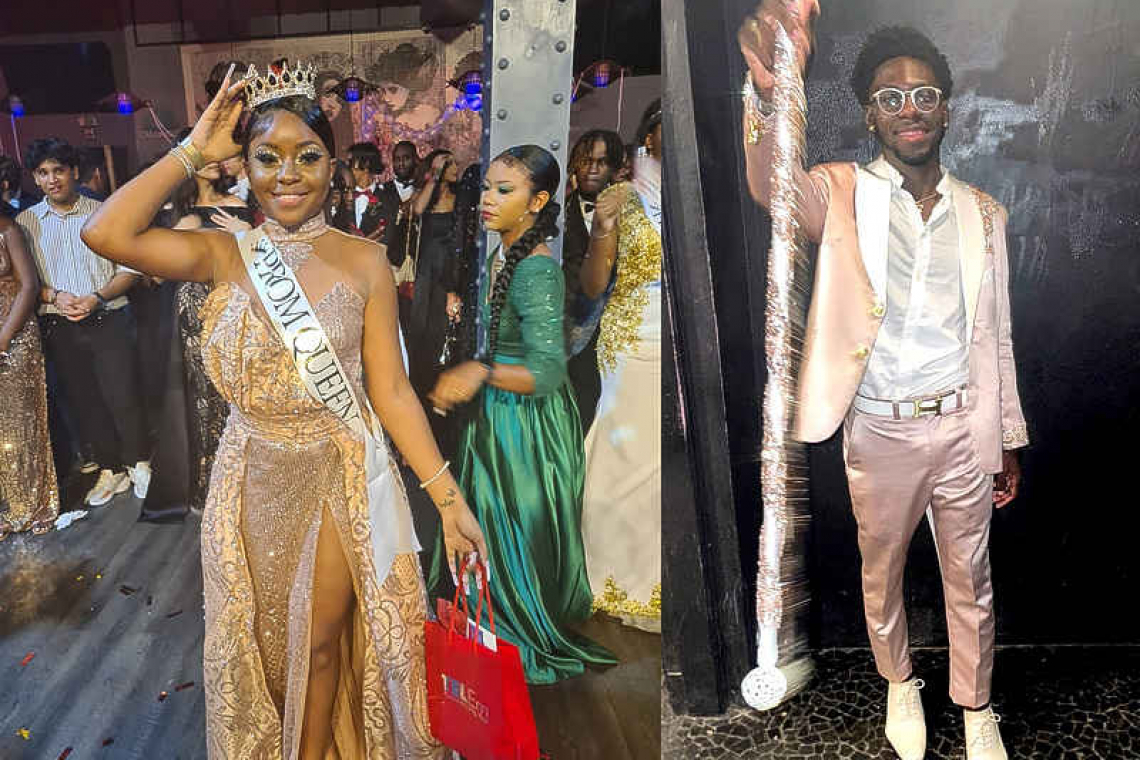 SIMPSON BAY–After a two-year hiatus brought on by the pandemic, Teen Times Prom Night was back in full force on Sunday, June 26, when just over 300 high school seniors attended the very formal and exclusive affair, now in its 26th year.

Teen Times Prom Night 2022, under the Egyptian theme “Pearls and Pyramids”, was held at Lotus Night Club.
High school seniors from all secondary schools in St. Maarten attended the event which is annually held as a “last hoorah” for these students before they leave the island and move on to tertiary education. It is one of the most anticipated events to mark the end of the school year.
Prom has evolved from being strictly a formal dance to an event that students have transformed into a spectacle of fancy red-carpet arrivals to the Prom, pre-Prom events such as “Promposals” and a small economic generator for seamstresses, restaurants, male boutiques, hairdressers, barbers, car rentals, hotels for sleepovers and luxury car services.
Most notable is the growth of the arrival part of Prom Night. Teen Times attached a prize to the “Best Arrival” and this has brought out the students’ and parents’ creativity. Take, for example, the winner of the best arrival prize at Prom Night 2022. St. Dominic seniors Shaquoya Vanterpool and Xion Genaro arrived in a car-drawn float, complete with dancers dressed in ancient Egyptian garb, with an eight-foot-high pyramid in the centre.
Escorted by police, the float came to a stop in front of the Prom venue, two doors built into the pyramid were opened and out stepped Xion first, followed by his date Shaquoya. Onlookers from nearby restaurants and outside the Prom venue erupted in cheers.
Other students arrived in luxury vehicles and on motorcycles, groups arrived in decorated buses, and much more.
“It truly was a sight to see. The students and their parents go all out every year. This year, they set the bar even higher. We are very happy with the turnout, the participation and the spirit the students came with. After two years of not being able to host Prom we too were anxious to host the event we love so much. The entire night could not have turned out any better after two years,” said Teen Times coordinator Roosje Rommy-Richardson.
The night also featured several other titles that are tradition at Prom. Prom King went to Ceth Codrington, Prom Queen was awarded to Zidania Charles Gumbs who also arrived at Prom on a float with a pyramid, Prom Prince went to Jose Varela, Prom Princess went to Eldiana Arnold who did the theme of the night justice by dressing like an Egyptian queen, and best couple went to Skyler Davis and Emerson Dervan.
Entertainment for the night was provided by DJ Siw’Roo and DJ Outkast, along with the host of the evening Rumari “Rummer” Rogers. The décor was handled by the company Just Creative assisted by Bertaux Fleming of Genesis Music Group.
TelEm and Fire Fit Gym provided the prizes for the night in the form of smart phones and memberships at the gym respectively. Teen Times also thanked The Daily Herald for the constant support extended to the “teen arm” of its publication.
“There is so much about Prom that we love. There were almost as many students at the Prom as there were onlookers who attend every year to cheer on the students and create this Hollywood atmosphere of camera flashes and awe. They make the students feel like celebrities, so, we hope they continue coming every year,” said Rommy-Richardson.
“We are very proud of all of the entertainment events we do for the youth and all of the projects we initiate that will benefit youth throughout the school year. After stressful exams and the reality of having to go out in the world to college and university, Prom Night is a last celebration with high school peers where they can create memories and reminisce on this part of their lives before the next chapter begins. Thank you to everyone who made Prom Night 2022 possible.”