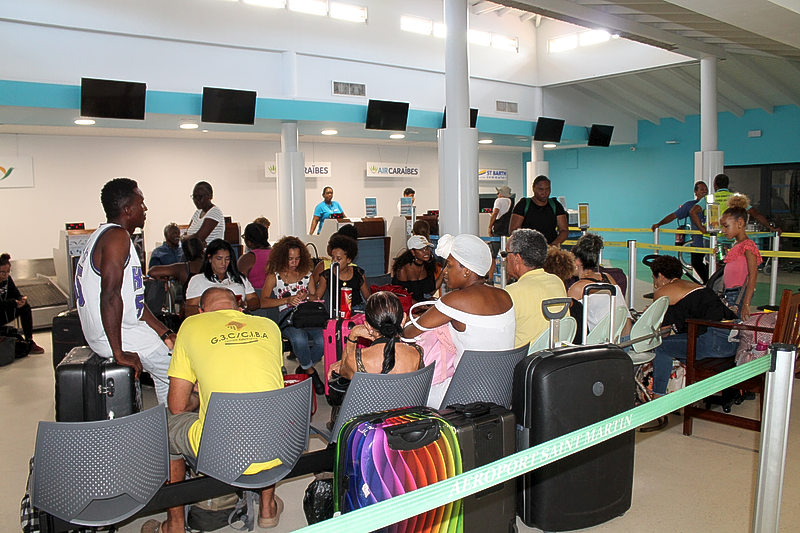 MARIGOT–Grand Case Airport re-opens for commercial flights today, Saturday, just over two weeks after the passing of Hurricane Irma. Since Irma the airport has only been open for military or evacuation flights.

Friday was also the last day for humanitarian flights to leave St. Martin from this airport.
New Airport Director Loic La Joye confirmed that verbal authorisation to open for commercial flights had been given by Prefete Deleguee Anne Laubies pending the official approval.
The terminal building appears to be in reasonably good condition. Preparations to open have taken a couple of days and some assistance for security has been received from the airport in Pointe a Pitre.
“Everybody is ready to start operating as we were before Hurricane Irma,” said La Joye. “It’s not perfect, of course, but passport control, immigration control, check-in desks, they are all working. We want to start operating to eventually get back to having a normal life. Air Caraïbes, Air Antilles and St. Barths Commuter will all be coming in on scheduled flights. Only private flights have to send us a request to see if we can accommodate them.”
La Joye said the runway is clear for arrivals and take-offs in daylight hours as before. There was some damage to the control tower, but repairs were to be completed Friday night and Saturday morning. The Fire Department has a full team operating as before with two trucks.
Shops, duty free, and airline desks will all be open. The airport café will be open, but offering limited service. The status for car rentals was not immediately known. It was understood some rental cars had been damaged and others were used by the military. The car park adjacent to the terminal has some issues with lighting.
“The main problem we had with the terminal building was leaks and damage to the air conditioning system,” La Joye continued. “The leaks have been fixed in the roof, but for the air conditioning we have to wait for new materials to arrive. We have the technicians here to do the repairs and on Monday we will have an idea of when the air conditioning will be restored. In the meantime we have installed some 20 fans to keep passengers reasonably comfortable.
“We also obtained two big tanks of water to service the restrooms. There are no issues with jet fuel availability.”