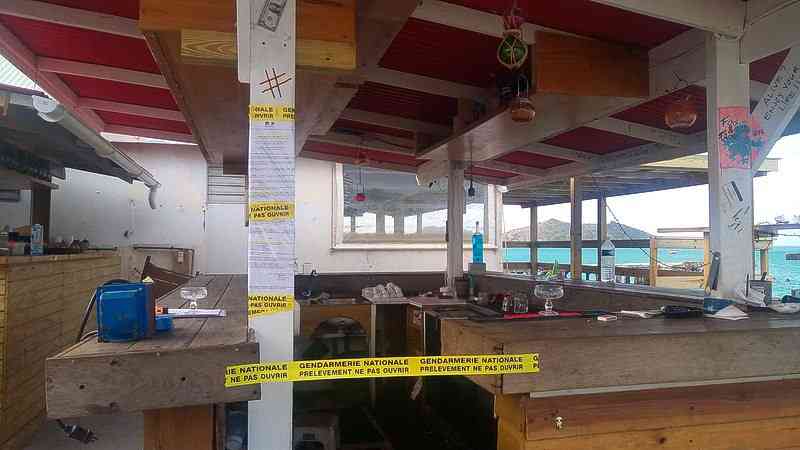 MARIGOT–Restaurant “Les Bains” located at 58 Boulevard Lionel Bertin Maurice in Grand Case was closed by inspectors on February 9, for a series of violations that pertained to hygiene regulations, illegal employment of foreigners, illegal construction, tax evasion and environmental considerations, the Prosecutor’s office disclosed.

The inspection was led by Health Inspector Michel Vely who is also Chef du Service de L’Alimentation, de L’Agriculture et de la Forêt (SAAF) for the Prefecture. The restaurant never made a “declaration of activity” with SAAF it was noted.

Six violations (“procès-verbaux”) in connection with illegal construction have been recorded and several summonses issued for illegal work. The bar and restaurant used a construction company not registered in the trade directory and not known to tax authorities (for turnover tax TGCA and company tax). Moreover, the restaurant did not respect the Plan d’ Occupation des Sols (POS) by increasing the floor space without a building permit and constructing less than 18 metres from the shore in an orange risk zone defined in the Plan de Prevention des Risques Naturelles (PPRN).

It was further noted there was insufficient protection on electrical installations in addition to violations of hygiene regulations deemed to be a danger to public health.
The restaurant must take the following corrective measures if it wants to reopen and before another inspection can be made: make a declaration of activity to SAAF, implement a sanitation plan, implement a plan to rid the establishment of harmful pests, cockroaches, mice, rats, et cetera, and implement a thorough cleaning and disinfection programme. The establishment can only be reopened once the above corrective measures are completed to the satisfaction of inspectors.

The proprietor can appeal the closure order with the administrative within two months, however, the Prosecutor noted he “had removed all his equipment and disappeared without leaving any address.”