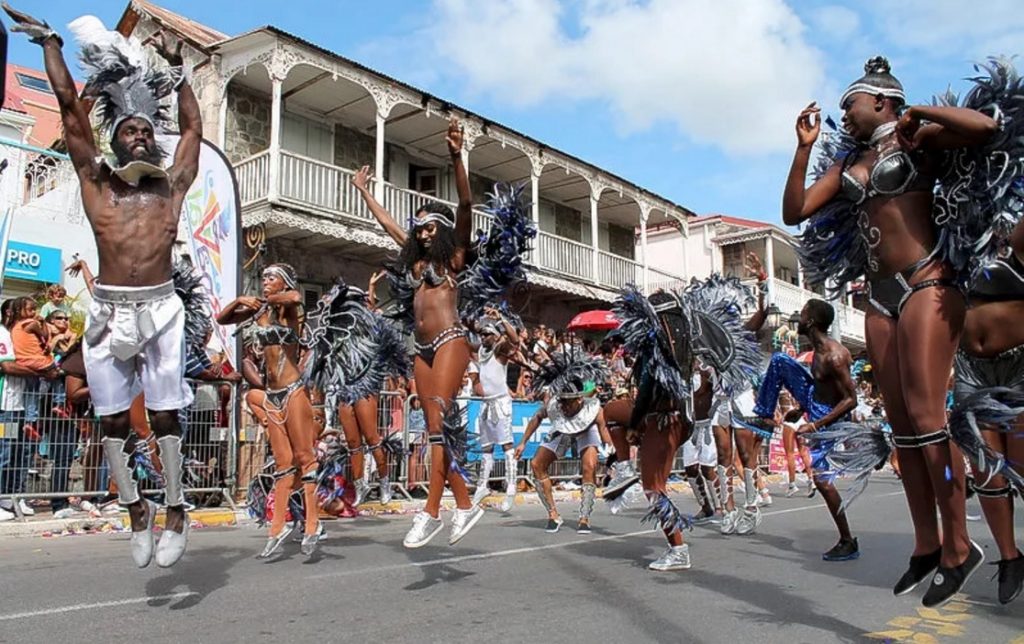 The parade started from the Agrément roundabout around 1:00pm, but was halted when one of the band trucks had a flat tire on Rue de Hollande. Not an easy task to change tires on trucks, but the parade resumed without too long a delay.

Heading up the procession were the winners of the 2017 Teen and Senior Queen Pageants in Carnival Village Friday night, respectively Tasyanna Clifton and Shaïna Galvani, riding separately in open-top cars. They were followed by runners-up from the show in Carnival costumes as well as Agnesa Leblanc, Cleopatra Carti and Luciana Raspail showing off their individual costumes.

The first troupe in the procession, but not in competition, was Survivors from the Dutch side, which was invited to participate. Survivors was followed by members of the Indian Association of St. Martin AISM. This was not a troupe, but participants were clearly having fun joining in the parade. The Association is one of the main contributors to the French-side Carnival and has often entered a troupe.

Happy Crew from St. James was the first troupe to be judged, presenting “Pearls of Africa.” It was followed by a Haitian association Prentan Flanbuayan presenting “Les Belle Couleurs Sunshine.” A troupe from Marigot and Concordia named Oxygène was next presenting “Bubble.”

The Dominican Republic was represented in the parade again by one of the associations with revellers wearing costumes in the colours of the national flag. Frederique Porier’s Hot ’N Spicy troupe was one of the biggest, at least three sections, and they presented “Les Amerindiens: The Legends.”

Bringing up the rear of the parade was Bacchanal Storm, a troupe from Grand Case that presented the theme “Wreak Havoc.” This sensational troupe created quite a stir with its energetic and dynamic choreography segment, and it would be no surprise if it is one of the big winners from the parade.

All of the results from the two parades and the Individual Costumes Competition will be announced in Carnival Village on Tuesday evening, February 28.