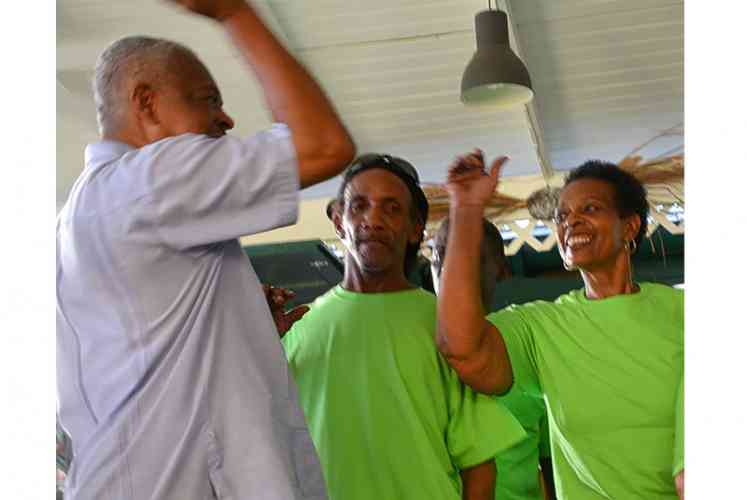 The restaurant stands in the historical grounds of the Government Guest House and has been carefully renovated. Co-proprietor René Reehuis used the occasion to present his first book Comical Wisdoms.

Newly-installed priest of the Roman Catholic Church Simon Wilson was asked to deliver an invocation to bless the renovation that includes a new roof over the lower terrace.

Monuments Director Walter Hellebrand was involved with both the redesign of the new roof in the historical complex as well as with the English version of Reehuis’ book. He was asked to say a few words.

Hellebrand joked that of the three pillars that make up the success of Ocean View Terrace – the cooking talents of Lauris Reehuis-Redan; the unique location as part of a monument and Reehuis’ characteristic sense of humour when he serves their guests – are now immortalized in his book.

“Although I was involved with two of these pillars, I always stayed out of the kitchen when Lauris was cooking,” Hellebrand said.

Comical Wisdoms is a collection of original sayings or aphorisms that Reehuis has developed with an online peer community group based mostly on Statia. Numerous guests took advantage of the signing ceremony and Reehuis paid tribute to his family and friends for the collective task of putting the book to print.

Reehuis is no newcomer to the creative art of writing and has penned many journalistic articles about the life and community of the “Historical Gem.”

“It is my first book and that represents about a year’s work of thinking, writing, listening and messaging text and illustrations. Meanwhile, I shall continue my journalistic work since it is a personal source of inspiration. Statia is a great melting pot for a million stories and those stories have to be told,” he said.

Reehuis has lived in Statia with his wife Lauris for 20 years. “I am delighted he has now published his Comical Wisdoms,” she confessed. “And perhaps I will no longer have to compete for his attention since he has spent many hours huddled in front of his computer screen. I am still his hobby and he remains my only and dearest sweetheart.”

Comical Wisdoms is published in English and Dutch and may be purchased at Ocean View Terrace. The author will be taking copies of his book to local gift shops and other outlets for further distribution.