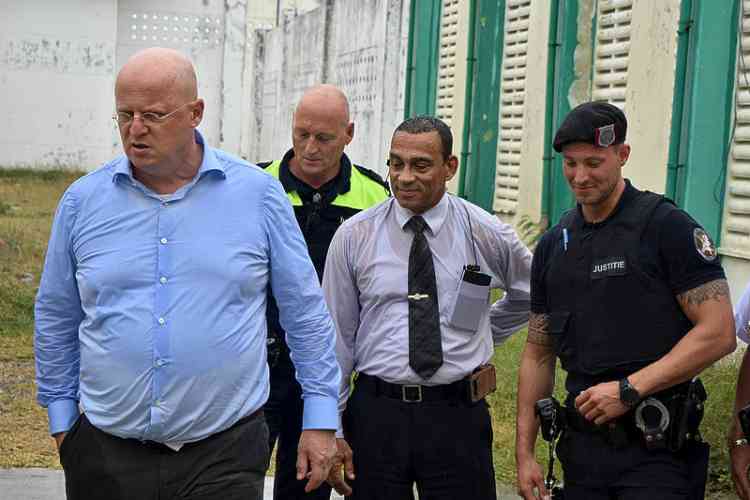 PHILIPSBURG–Netherlands Justice and Security Minister Ferdinand Grapperhaus arrived in St. Maarten on Tuesday and met with the Council of Ministers on Wednesday morning to discuss vital justice issues. St. Maarten Minister of Justice Cornelius de Weever accompanied Grapperhaus to the police headquarters in Philipsburg and the Pointe Blanche prison.

Grapperhaus said he is impressed with the approach of the interim government of St. Maarten and their performance thus far. “We discussed the prison situation and seeing it first-hand. I can say that the prison is in need of repairs. I was shocked and various parts of the facility are in bad shape,” stated the Dutch minister.

Representative of the Netherlands in St. Maarten Chris Johnson was also present for the meetings and presented the Dutch and St. Maarten Ministers of Justices during a press conference at Holland House on Wednesday.

Grapperhaus was shocked by the state of the Philipsburg police station and said immediate repairs need to be made before the upcoming hurricane season that starts in June. “I toured the police station Wednesday morning and some offices are not in use. There are surveillance cameras that are not functional,” he said.

“We have discussed short- and long-term plans for the police station and the prison and we hope that works can begin shortly. The cooperation between the Dutch and St. Maarten police officers were also discussed during the meetings with the Dutch Minister,” said De Weever.

The Daily Herald asked Minister Grapperhaus if he agrees with State Secretary for the Interior and Kingdom Relations Raymond Knops’ stance about the aid funds for St. Maarten not being used for the building of a new prison. Grapperhaus said Knops was clear about his position and he would not speak on that topic.

“As the Minister of Justice, I can say that the state of the St. Maarten prison is bad and something needs to be done as soon as possible. I did discuss alternative measures with the St. Maarten Government and we are looking at a short- and long-term method,” said Grapperhaus.