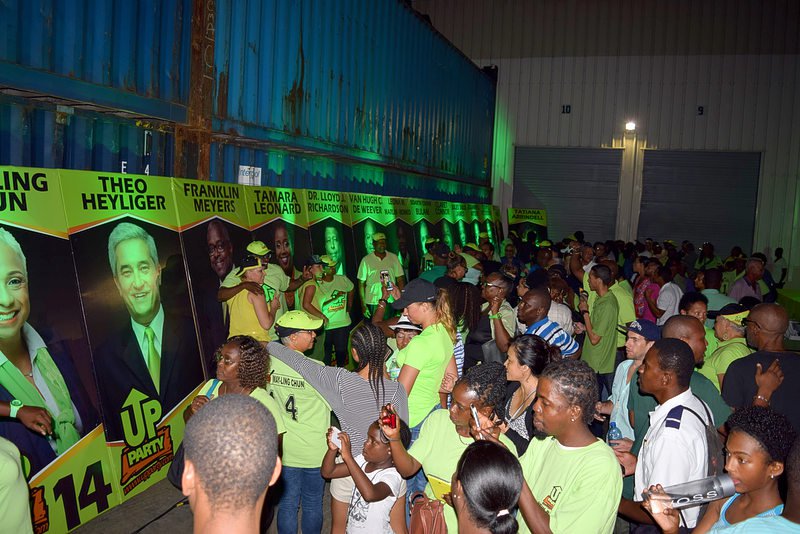 ~ With De Weever, Marlin-Romeo on board ~

POINTE BLANCHE–Six sitting Members of Parliament (MPs) seeking re-election are on the United People’s (UP) party slate for the September 26 Parliamentary election.

Two of those MPs are Cornelius de Weever, who ran in the last election with the Democratic Party (DP), and Leona Marlin-Romeo, who was with United St. Maarten (US) Party.

MP Johan “Janchi” Leonard (UP) is not contesting this upcoming election. He is the only sitting MP not running for re-election so far. He and six other MPs form the “Super Seven” opposition bloc in Parliament. Although he is not running, Leonard was invited by party leader MP Theo Heyliger to sit with the candidates.

The green party unveiled its slate of 23 candidates, the maximum allowed by the electoral law, in Pointe Blanche on Wednesday night. The presentation of the candidates comes ahead of Nomination Day, August 8. UP is the first party to present its full slate. The other eight parties in the election have only released some of their candidates to date. However, traditionally, most parties make their slates public on Nomination Day.

The UP slate is headed by Theo Heyliger with deputy leader MP Franklin “Frankie” Meyers in the number two spot. This is different from the 2014 slate when that spot was occupied by then-Parliament Chairwoman Gracita Arrindell. Arrindell is now heading up the slate of her own party – People’s Progressive Alliance (PPA).

Heyliger told supporters that when he and the party made promises “we delivered.” The current National Alliance (NA)-led coalition has been “taking credit” for things the former UP-led Government had put into motion, he said. He singled out the work of former Justice Minister Dennis Richardson, saying the current minister and the party that supports him were claiming Richardson’s work.

Heyliger promised UP would solve the issues with the landfill, better medical care and the hospital, and improve tourism, within six months of being elected.

Last election, Heyliger had declared that should UP get into Government he would stand as Prime Minister. However, he did not, and offered in the way of explanation that he had seen the witch hunt launched against his grandfather, the late Dr. Claude Wathey by “outside” forces.

Referring to the Dutch Government, he said he was “tired” of outsiders “meddling in our democracy. … It is time we break the chains and set us people free.” The Prosecutor’s Office “can’t thwart democracy.”

Heyliger challenged UP opponents “to beat” the party “at the polls” and not use outside help to get into office.

“We will make our country formidable again,” he said.

Meyers, prior to introducing Heyliger, said the country’s was at “the darkest” in 50 years. “The taxi drivers are bawling. The businesses are bawling” because “vision” and “equal opportunity” are missing, he said.

Moving up from number 12 in 2014 to three this year is MP Tamara “Bush Tea” Leonard. At the launch of the slate two years ago, she was battling stage-three breast cancer. She announced last night that she had just been declared in remission and “cancer free.” She called on people “to do your part” at the polls to ensure electing people who were responsible and committed to country.

MP Dr. Lloyd Richardson has maintained his number four position on the slate. He said St. Maarten needed stability in Government and in health care.

De Weever, who was the DP’s number two, stands as number five on the slate. His brother Miguel de Weever, who ran with UP in 2014, said he was passing the baton to his brother to help bring stability to the country. Cornelius took the stage saying the last time one bother had been wearing red and one green, but they were together now in green.

Marlin-Romeo, formerly the US Party number two, is at number six. She called on all voters to choose for competent representation by “gearing up” for the elections, “because when we win, you win.”

Following the MPs at number seven is businessman Sidharth “Cookie” Bijlani, who was the fourth-highest vote-getter on the DP slate in 2014. He said the economy was suffering and Heyliger and the UP was the party to make a difference for the country.

Former Tourism and Economic Affairs Minister Claret Connor is in the number eight spot, having been number 10 on the 2014 slate.

Former MP Jules James maintains number nine, the same as in the 2014 election.

Rounding off the top 10 is former Minister Plenipotentiary Josianne Artsen-Fleming. She was at number five in the last election.

Moving from number eight to 11 is banker Terry Peterson.

Businessman Louis “Rudy” Engel is at number 12, up from number 15 two years ago.

Second-time candidate entrepreneur Eugene “Geno” Heyliger is at number 15, up from the 20th spot in 2014.

Armand Meda, who ran with DP in the number 11 spot, is on the UP slate at 15. He is followed by newcomer Kevin Maingrette at number 17.

Former Police Commissioner Richard Panneflek, who had also served as Deputy Minster Plenipotentiary, is at number 18. He contested the election in 2010 on UP’s first-ever slate.

Of the 23 candidates, 15 have contested previous elections and the remaining eight are newcomers to the political stage. Eleven of those who ran before ran with UP while three were with DP and one with US Party in the last election.

Heyliger introduced the other 22 candidates on the list, telling those present, “Let me introduce you to the next Government of St. Maarten.” The party and candidates are “geared up” for the elections, he said.

After their introduction, each candidate signed a declaration formalising his or her candidacy for the election.

UP Board President Sylvia Meyers urged all candidates “to reach out to everyone … make everyone feel like a belonger.”