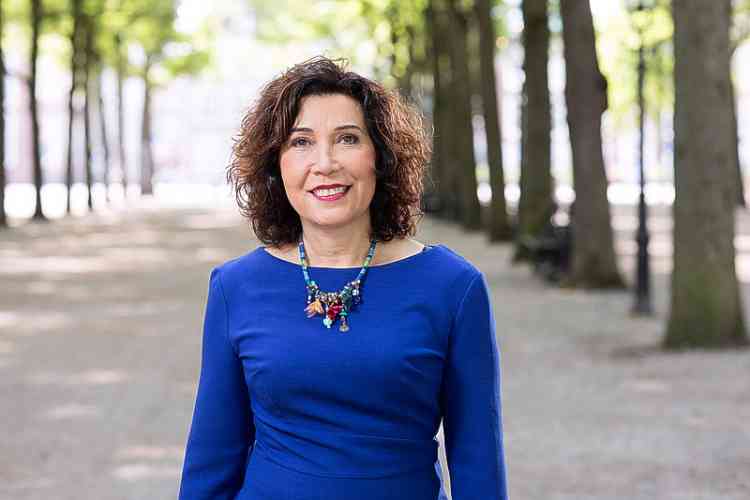 Member of the Second Chamber of the Dutch Parliament for the green left party GroenLinks Nevin Özütok. (GroenLinks photo)

THE HAGUE–Concerned about the wellbeing of the St. Maarten residents who suffer from the frequent fires at the waste disposal site, Member of the Second Chamber of the Dutch Parliament Nevin Özütok of the green left party GroenLinks is demanding clarity from the Dutch government.

Özütok submitted to Dutch State Secretary of Home Affairs and Kingdom Relations Raymond Knops on Wednesday a number of written questions in which she is seeking answers about the dump, but also stressing the need for urgent measures to protect people’s health.

“Almost on a daily basis, black smoke fills the air over Philipsburg and surrounding areas. Residents and tourists are exposed to toxic fumes,” Özütok told The Daily Herald. She is worried that apparently the results of the analysis of the fumes carried out by an expert invited by the World Bank have been kept quiet by the St. Maarten government. De Volkskrant newspaper reported about the issue on Monday.

“GroenLinks considers the health of the residents of St. Maarten a human rights matter whereby the people have a right to protection one way or the other. I am wondering whether the Dutch government gives sufficient priority to the health of the St. Maarten people. That is why we are asking the state secretary to do everything he can to quickly put out the fires and to provide information,” said Özütok.

In the written questions that were sent to Knops, Özütok asked him whether he was aware of the media reports about the direct threat the dump fires pose to the public health, and whether it was correct that people working on the waste disposal site, residents living nearby and tourists were exposed to the toxic fumes in the smoke.

She wanted to know whether it was correct that the results of the fumes’ analyses, which showed that the high concentrations carbon monoxide, hydrogen sulphide and other toxic substances that are a severe threat to public health have been kept secret. “If so, why? When did you exactly know about the results of these analyses and what did you do with this knowledge?”

Özütok asked Knops whether he was willing to publish the results and/or to urge the St. Maarten authorities to make the findings of the investigation public. She also wanted to know about the plans of the St. Maarten government for a waste-to-energy incinerator and why this process is taking long. “Does this mean that the residents will continue to be exposed to toxic substances?”

She urged Knops to take a proactive stand and to take action to protect people’s health. She asked him whether he was willing to forego the own responsibility that Country St. Maarten has in this matter and to actively contribute to a quick containment of the health risks the dump poses.

“Do you agree with me that this grave danger for the public health needs to be tackled as soon as possible? Is it right that the World Bank will only take a decision somewhere in the next few months about a project to stop the fires and to remove waste? If so, do you agree that that this doesn’t show a lot of urgency considering the severe damage that the toxic smoke causes to people’s health? If not, why not?”

The GroenLinks party has sought clarity for many years about the pollution in Curaçao caused by the Isla refinery. In this case too, people’s health is affected by the toxic substances of the refinery’s emissions. GroenLinks has continuously reminded the Dutch government of its responsibility to safeguard human rights within the Kingdom and that intervention by the Kingdom government is needed to keep the refinery to environmental standards.