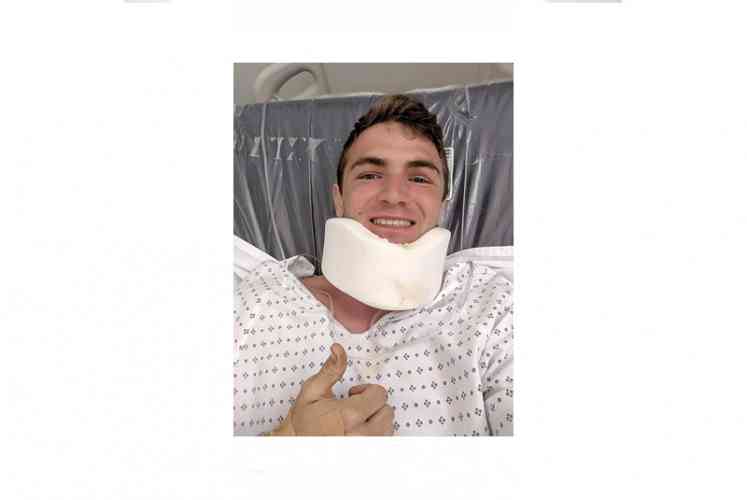 Clay Chastain in a neck brace on Friday, as shown on his Facebook page.

ST. KITTS–A newly-wed couple visiting St. Kitts on their honeymoon have been telling of their experience after the husband fell seventy feet in the crater at Mount Liamugia.

According to Indianapolis, Indiana’s WTHR television station, the just married couple experienced a life-threatening emergency on what should have been a perfect honeymoon.

WTHR reports the Purdue University graduates had an accident while climbing a volcano in the Caribbean a few days ago. Now they need help getting back home to a hospital in the United States.

Just days after their wedding, which the bride’s mom Debra Catron describes as “perfect,” Acaimie and Clay Chastain’s vows got tested on their first big adventure as a married couple.

“You think you have your life planned out and then God has other plans,” Catron said.

While climbing a dormant volcano in St. Kitts, the Purdue grads reached the top and Clay started to hike the rocky path down.

“There was a path down that had a rope and the rope broke,” Catron said. “He fell, free-falling and then tumbling about – they ‘guesstimate’ – 50 to 70 feet.”

The honeymooners were alone on that mountain. They had no cell service either.

So with her husband bleeding and badly injured, Acaimie, all 110 pounds of her, climbed down and brought him up.

“She half-carried him up out of the crater and then two miles down the volcano,” Catron said. “Pull, push, drag … the Lord was with her. That’s the only way.”

Clay survived, but he’s now stuck in St. Kitts with a concussion, a fractured vertebra and a fracture with an air pocket in his skull.

“That air pocket, that’s what’s prohibiting him from flying commercially with a pressurised cabin,” Catron said.

They’re newlyweds ready to heal after a life-threatening fall. “They’ve gone through this, they can handle anything,” Catron said. “We’re just so thankful he wasn’t hurt worse and we still have a son-in-law to love on.”

Clay posted on his Facebook page on July 19: “I know a lot of you have already heard and any prayers you have made or will make would be greatly appreciated. While on my honeymoon with Acaimie Catron we were hiking up a volcano in St. Kitts, one of the tallest in the Caribbean. We had already reached the top and since it was a dormant volcano the crater of it was a lush prairie. There was a rope trail leading down to it and I trusted the ropes with my weight too much and one of them snapped. Acaimie guessed in total with free fall and tumbling down the hill, which was extremely steep at about 60-70 degrees, I fell for about 50-70 feet. It’s honestly amazing thanks to God’s help that my injuries were not worse. I’m feeling fine now though. My wife Acaimie is extremely strong and managed to help me back up out of the volcano crater and down the trail up its side until we got signal which was about four miles while I was collapsing and vomiting blood the entire way (which apparently was just coming from lacerations in my mouth and nose). I only have a slight fracture in the base of my skull and a fracture in a vertebrate of my neck which doesn’t hurt that bad. I can still move my head around, but the skull fracture caused air to go into my skull which won’t allow me to fly commercially and it’s making my right ear go deaf because the air is pressured right behind it, but it’s only temporary they think. We’re organising transport to the US through low-flying emergency aircraft to avoid high pressure and Acaimie has done a great job managing all this. Thank you so much for the love and support.”