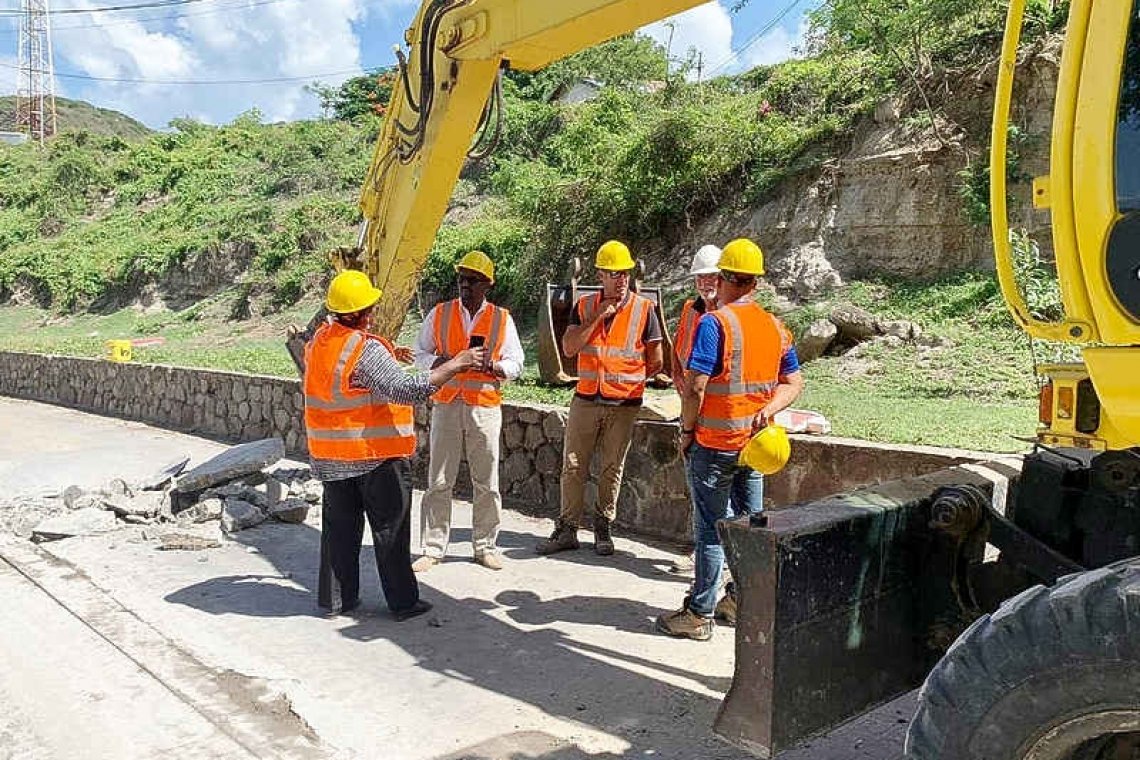 ST. EUSTATIUS–A ground-breaking ceremony marked the beginning of reconstruction works on the access road to and from the port of St. Eustatius, specifically the hairpin bend at Smoke Alley, on Wednesday, August 5.

Preparatory work had already begun with the removal of the patchy asphalt layer and a construction site has been created inside GTI Statia’s property. The contractor for the project is Windward Roads.Present at the ground-breaking ceremony were Deputy Government Commissioner Alida Francis, representatives of Statia Roads and Construction, Maldwyn Timer of the Directorate of Economy, Nature and Infrastructure (ENI), and others.“It was an honour for us to start yet another improvement in the road network on St. Eustatius,” said Francis on behalf of the public entity. The project is scheduled for completion by the end of this year if there are no delays such as those caused by hurricanes.Timber explained that the Jeems Road project is directly linked to the Smoke Alley hairpin bend project. The culvert built under Jeems Road will catch most of the rainwater and redirect it through the farm area. This means that less water will go towards the sea.Timber said this road is a major waterway and when it rains water comes flowing down like a river. The water on Jeems Road will be managed by gutters and other methods and directed towards Orange Bay Road.The contractor has already started constructing culverts in the road as well as a new outlet of rainwater into the sea. Steps will grant pedestrians access to Orange Bay beach.Now that the actual work has commenced, the flow of traffic from Oranjestad to the port and back may be delayed for 20-30 minutes. Arrangements have been made with supermarkets and other stakeholders for the transport of goods at 12-day intervals. Emergency vehicles and other services needing emergency access will be permitted.Only one lane at the Smoke Alley bend will be closed for traffic. All vehicles up to 2.5 metres wide should always be able to pass. Vehicles wider than 2.5 metres and heavy transport vehicles with 20- or 40-foot containers can use the road every other week on Tuesday and Wednesday to allow a fixed window for transport of fresh products and other supplies.A connection plug for electricity to connect cooling containers for storage was installed in the port to make sure fresh goods can be preserved.On completion, the road will meet safety standards for all types of vehicles and be less demanding on motor vehicles. Rainwater will be collected at Upper Town and diverted to a water-infiltration zone, instead of flowing down into the ocean, thus limiting erosion and damage to the coral.