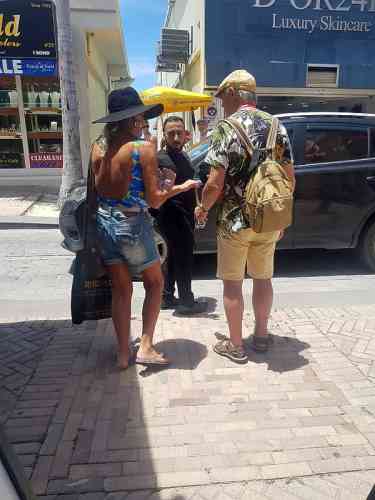 PHILIPSBURG–The St. Maarten Timeshare Association (SMTA) sounded the alarm more than a month ago about the aggressive sales practices that happen island-wide. Yesterday it joined forces with several other stakeholders to lend the message more force.

“St. Maarten is still recovering from [Hurricane – Ed.] Irma and the last thing we can use is harassment of tourists on Front Street, the Boardwalk [Boardwalk Boulevard] or by stopping cars on other roads,” it was stated in a joint press release from SMTA, Indian Merchants Association (IMA), St. Maarten Hospitality and Trade Association (SHTA) and Philipsburg Promotional Board (PPB).

“The cry for help solved the situation at Oyster Bay [Beach] Resort, but the OPCs [off-premises consultants] moved to other locations on the island. Scratch cards are still handed out on Front Street as well as by the Dutch-French border close to Captain Oliver’s Resort, as well as other locations.”
The groups said the problem of harassment is not limited to OPCs, but also comes from beauty stores on Front Street and the sales of hats, T-shirts and other articles on Boardwalk Boulevard or the beach.

SMTA and other organisations in the country such as IMA, PPB, and SHTA came together to urgently ask for the laws against aggressive sales practices to be enforced.

“And that means simply selling from a booth or shop instead of from a car or scooter (OPCs), loitering with cosmetic samples on the street or approaching our visitors on the beach for T-shirts,” they said.

“If somebody wants to have lunch or a drink, they can go to a restaurant or bar; if someone wants to buy a cell phone or a bracelet, they can go to an electronic or jewellery store. People are wise enough to make their own choices without being approached (harassed) on a public road. Besides that, it is against the law of St. Maarten. The problem is that this law isn’t enforced, and that needs to change.”

IMA Chairman Damu Rawtani said, “With the beginning of the high season around the corner, we cannot wait any longer to stop this. From the second half of October we have a cruise ship in town almost every day. The more ships, the more harassment. This will have a very negative effect on our business and the image of St. Maarten.”

“It does not create the right impression,” said Paul Boetekees of PPB. “Philipsburg is the capital of St. Maarten. The board and organisation are working diligently with the ministries to have many issues resolved to brand Philipsburg as a fabulous, great place to shop and dine when you are in St. Maarten.

“Tourists should be able to walk the streets in a relaxed way, without being harassed by storefront staff with discount offers, receiving sample creams, or being targeted by OPCs over the public road using scratch cards from the 1980s.”

SMTA Chairman Jelle Hamstra said these illegal and aggressive practices have to stop. “Various attempts to meet and discuss an action plan with the Minister of [Tourism, Economic Affairs, Transport and Telecommunication] TEATT never became a reality. The last time our board met with the [then] Executive Council about this issue was in December 2002.”

The SHTA stressed that harassment from barkers and aggressive salespeople does not embellish the historic image as “The Friendly Island”, but maintaining a low level of beach-peddlers contributes to a more pleasant experience for residents and guests alike.

The private sector associations call for enforcement to prevent aggressive marketing beyond the legal limits of the shops.