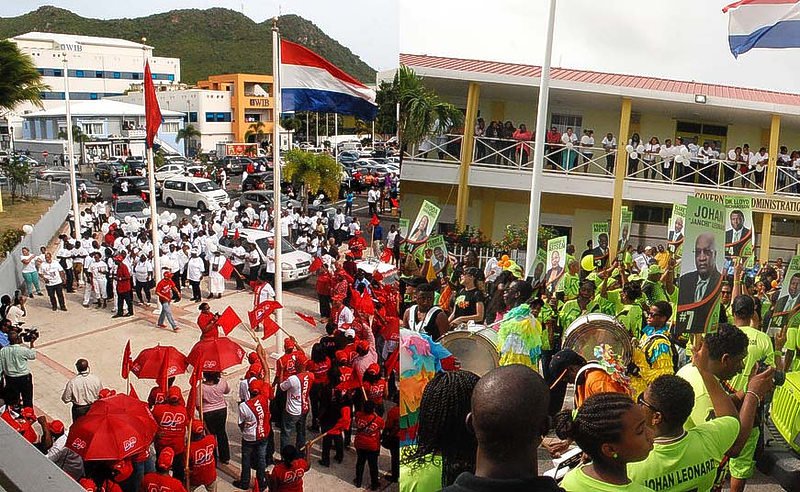 PHILIPSBURG–The Ministry of Justice issued a series of guidelines for the campaign leading up to the September 26 Parliamentary Elections. The guidelines are specifically for all registered political parties seeking seats in the 15-member Parliament. The “General Permit, Measures of Order and Code Conduct” guidelines come ahead of Nomination Day on August 8 and will remain enforce until Saturday, September 24.

GENERAL PERMIT, MEASURES of ORDER AND CODE of CONDUCT (for Election Campaign 2016)

In connection with the elections for the members of Parliament of St. Maarten, which will take place on Thursday, September 26, 2016, the Minister of Justice proclaims that all registered political parties will have to adhere to these:

GENERAL CONDITIONS, MEASURES of ORDER and CODE OF CONDUCT.

a. Must designate a person as their contact person, to the police and

b. May, according to the below mentioned traffic and order measures, during the election campaign

2. To place advertising material (posters, flags and such signs) on or to the public road

– The period of the election campaign is scheduled to be from Monday, August 8th, 2016 up to and including Saturday, September 24th, 2016.

– Political activities are allowed only in the abovementioned period.

– Publicity billboards, which are posted on, or alongside the public road, may not exceed 6 m x 6 m (20 ft x 20 ft), considering that we are in the hurricane season.

– Requests for holding public events are submitted to the Ministry of Justice,

– Decision to allow more than one public manifestation to take place in the same neighborhood at the same time is on basis of:

1. order in which the petitions are received; and

2. by taking into consideration the distance between the proposed

– Audio of public speeches can be recorded, to determine afterward, if the

speakers have complied with the limits of freedom of expression.

– The recording will be done by the Police. The Prosecutors office judges whether

the limits of the freedom of expression were violated.

– No public events are allowed on the election day or the day prior to the Election Day.

– On the Election Day; no parades which are politically tinted, gatherings (of) or

activities to attract the public, are allowed in a distance of 200 meters from the

polling stations. Such to the judgement of the police, in interest of the public

the polling station, except those persons who are there to actually honor and

exercise their right to vote.

Safety must be followed up immediately.

1. In the interest of the flow and safety of the traffic it is prohibited:

– To set up political or politically tinted publicity objects, in those places which are prohibited by the Traffic Ordinance St. Maarten;

–  To set up publicity objects on or unto traffic facilities (road signs, traffic lights, road blocks and similar) or any other traffic signs and bridges/causeway except traffic barriers;

– To block the roads, the intersections or divisions are prohibited

To leave the political or politically tinted publicity material which was set up, behind;

To set up political or politically tinted publicity material on or above those of another political party;

To set up political publicity material on or unto property or goods of others, and/or property plots without the prior consent of the owner or lessee thereof;

To set up political publicity material in such a way, that the traffic on the public road is thereby hampered or made unsafe;

To place publicity material which is in one or the other way offensive and or tasteless;

To block the entrance and/ or exit of buildings;

To use sound amplifiers such as microphones, speakers or megaphones, if in the opinion of the police these are too loud;

For the public and participants of the manifestation to abuse the consumption of alcoholic beverages;

To set up flags, banners and publicity signs on the bridges and the ‘causeway’;

To set up publicity material on or around the roundabouts on the island, in a such way that it can hinder the traffic.

To take a cellular phone into the polling station. For this purpose metal detectors will be used.

2. The political parties are legally responsible for:

Damage, obstruction, or inconvenience caused by, or as a result of, setting up or placing, or for the presence of the publicity material, on behalf of the political party;

The risk, which could be accompanied by police measures, because of the incorrect placing of the publicity material;

The timely removal of the publicity material which were placed by them;

Leaving the location clean, after the manifestation has been held;

The damage and/or disproportionately nuisance caused by their participants .

b. All publicity material, which has been set up or attached for certain political party, shall be regarded as to have been made by or on behalf of that party

c. In case of any tropical Storm, all political material must be removed timely until further notice. “TIMELY” and “FURTHER NOTICE” will be announced to the contact person of the parties by the police or via the media.

d. During Election Day, the police will also give extra attention to public drunkenness and other types of nuisance and offensive behavior.

GENERAL CONDITIONS, ORDER of MEASURES and CODE of CONDUCT:

1. The person who proposes to hold a gathering in a public place, to profess religion or life’s principles, or have a meeting, or a demonstration, will have to give written notice to the Minister at least 48 hours before it is publicly announced.

2. The person who submits the notification, will receive written proof thereof, in which the date and time of the notice is mentioned.

3. The Minister may, in special circumstances, shorten the time limits referred to in the first paragraph, or accept a verbal notification.

1. The Minister shall assess whether the notification gives rise to the banning of the demonstration, gathering or meeting, or to set forth requirements or restrictions.

2. A prohibition can only be put into action, if:

a. the required notification was not submitted on time, except if the special circumstances as referred to in article 3, paragraph 3 are applicable;

b. the required information has not been provided, or was incorrect or incomplete;

c. it is conducive to one of the interests listed in article 2.

The Penal Code of St. Maarten

The Minister of Justice