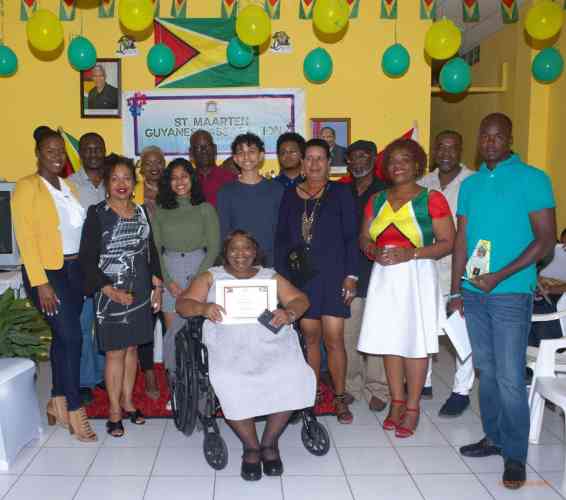 Some of the persons who were recognised on Wednesday evening.

PHILIPSBURG–The St. Maarten Guyanese Association honoured fourteen outstanding Guyanese nationals on Wednesday for their contribution to the local community and for excelling in their respective fields.

The 14 were honoured during a cocktail and awards reception held at the Association’s office on Back Street on Wednesday evening.

Additionally, a number of students were honoured, including Vishwadeo Persaud and Tania Narine for the Caribbean Examinations Council (CXC) Caribbean Secondary Education Certificate (CSEC), who both received bursary awards compliments of Sax Car Rental, and Mario Phang for CXC Caribbean Certificate for Secondary Level Competence (CCSLC). Antonio Fernandes was honoured in the area of Sports.

Rena, who was the main honouree for the evening, was recognised as the longest serving and most successful Guyanese businesswoman in Dutch St. Maarten. She is the chief executive officer (CEO) of the Motorworld Group of Companies. She was accompanied by her husband Motorworld Group Board of Directors Chairman Imran McSood Amjad. Rena and David addressed attendees and thanked the Association’s board for a job well done in organising the event.

Department of Culture head Clara Reyes, who was also in attendance, urged the board and members to keep up the good work.

The award ceremony is part of a week of activities being held by the Association to mark Guyana’s 53rd independence anniversary, which will be observed on May 26.

The event opened with a welcome by organising committee head Nicole Duke, followed by a prayer by Association Vice-President Malcolm Mickle.

Master of ceremonies Velda Blackett spoke briefly about the association. She outlined the association’s purpose, noting that one of its main goals is to ensure that Guyanese and Guyanese-at-heart come together and be informed. She told the gathering of approximately 75 persons that there is a need for them to be part of the association to help in the development of its objectives.

The association’s next event to mark Guyana’s independence anniversary is a two-day Cricket Festival on May 25-26 at the Carib Lumber Ball Park, in collaboration with Epic Group.

There will be a motorcade from the ring road (in the vicinity of the old Air Lekkerbek) to the Festival Village entrance and ending at Carib Lumber Ball Park on May 25 starting at 2:00pm. Persons are encouraged to beautify their vehicles to showcase aspects of Guyana, as prizes will be awarded for the best decorated vehicles.

The motorcade will culminate with a Family Fun Day at Carib Lumber Ball Park at 3:00pm, and patrons can expect games such as rounders, “sal out,” hopscotch, cricket, dominoes and races for both adults and children. There will be a variety of succulent Guyanese dishes and beverages on sale.

There will be a stage show featuring local Guyanese deejays who will be providing music from 6:30pm onwards. Guyanese music sensation Blaze Antonio will be performing his hit single “Blow” and other latest tunes alongside Guyanese comedian “Granny Ivelaw.” There will also be a raffle drawing on May 25 at 8:00pm that offers attractive prizes such as a roundtrip air ticket for two sponsored by Winair.