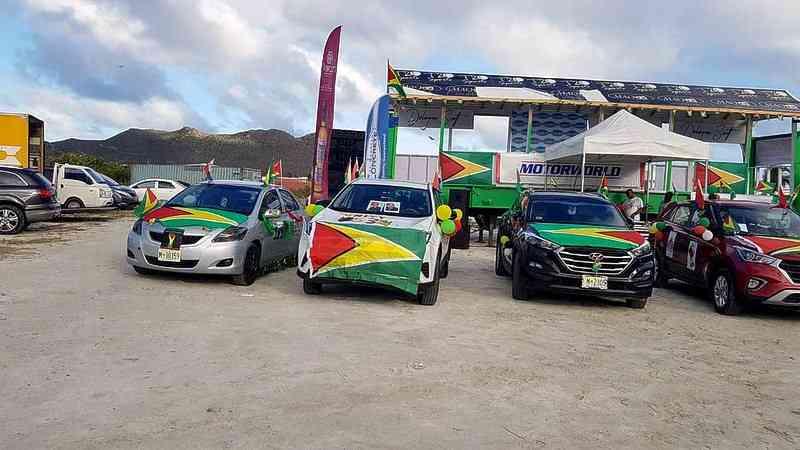 Vehicles draped in the Guyana flag on Saturday.

A scene during the motorcade.

PHILIPSBURG–A colourful motorcade and a well-attended stage show were amongst the activities held over the weekend as St. Maarten-based Guyanese celebrated their country’s 53rd independence anniversary.

An estimated 20 vehicles draped in the Golden Arrowhead (the Guyana flag) and with persons dressed in green, yellow, red, black and white to represent the colours in their flag participated in the colourful motorcade. The motorcade started at the ring road in the vicinity of the old Air Lekkerbek, wound its way to the entrance of the St. Maarten Festival Village and ended at the ring road.

The motorcade culminated with a Family Fun Day which was also held on the ring road. A variety of succulent Guyanese dishes and beverages were on sale.

The main event was a stage show featuring local Guyanese deejays and Guyanese music sensation Blaze Antonio who performed his hit single “Blow” and other latest tunes alongside Guyanese comedian “Granny Ivelaw” and 2014 chutney king out of Guyana Pooran Seeraj. An estimated 2,000 persons attended the stage show and from all indications seemed to have a good time.

A two-day Cricket Festival was also held at the Carib Lumber Ball Park over the weekend, in collaboration with Epic Group.

Guyana, the only English-speaking country on the continent of South America, gained its independence from Great Britain on May 26, 1966. Prior to Britain’s colonisation, the country changed hands many times, with the Dutch being the first of a series of European nations to settle on the land in 1616.

Evidence of the close to 200 years of Dutch occupation is still apparent today in the names of many places, such as New Amsterdam, Uitvlugt, Stabroek Market, Kyk-Over-Al and Fort Zeelandia, the Essequibo River, and Zeeburg. Its capital city, Georgetown, owes much of the architecture, canals, and kokers to Dutch ingenuity.

The colony of Demerara-Essequibo was created on August 13, 1814, when the British combined the two colonies into one. In 1815, the colonies of Essequibo and Demerara were formally ceded to Britain, and 16 years later, in 1831, Berbice, the last of what is known today as the three counties, was merged into British Guiana, thereby ending Dutch rule.

British Guiana remained under British control until 1966. Four years later, on February 23, 1970, the country became a republic and was formally recognised as the Cooperative Republic of Guyana, having as its first Executive President Linden Forbes Sampson Burnham, who governed until his death in August 1985.