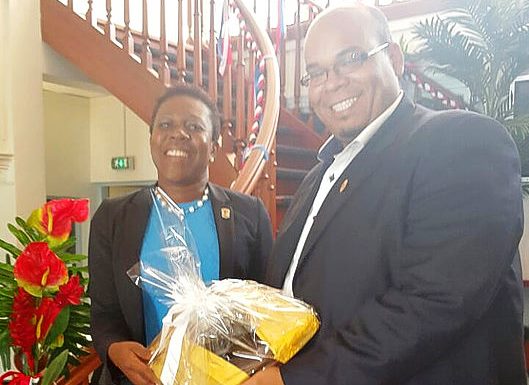 MARIGOT–Haiti’s Minister of Tourism and Creative Industries Guy Didier Hyppolite visited St. Martin as part of a tour of the Caribbean earlier this week, heading a delegation that included six employees.

In addition to meeting the Collectivité and Chamber of Commerce (CCISM) elected officials, the Haitian dignitary met St. Martin Tourism Office President Jeanne Rogers-Vanterpool with whom he reiterated his ambition to develop the tourism industry of his country.
“Guy Didier Hyppolite wants cooperation on a number of projects, both in terms of expertise and partnerships, to training,” explained Rogers-Vanterpool.
The Haitian Minister stressed the important potential of the young local Haitian community, this new generation that was born in St. Martin that does not know Haiti and could be encouraged to visit that island.
The Minister also focused his efforts on highlighting the tourism attractions of his island and emphasised its culture, arts, gastronomy and the beauty of its natural sites.
“He also wanted to know how St. Martin’s tourism policy was conducted and how the Tourist Office is organised,” the President added. Minister Hyppolite also referred to the implementation of an investment code in his country.
The tourism office noted in its release that Haiti doesn’t as yet have a tourism promotion organization and as a result, this mission is being carried out by the relevant Ministry.
Since his appointment in March 2016, Guy Didier Hyppolite has appealed to Haitians in Haiti and those in the diaspora to take ownership of Haitian values, emphasising that “to visit Haiti is to participate in its development”.
After the earthquake of January 12, 2010, Haiti went from 2,000 hotel rooms at an average rate of US $100 per night, to 773 rooms. As of its inauguration, the Government of Joseph Martelly wanted to revive this sector. The Ministry of Tourism as a result developed an ambitious programme in four areas: the North (Cap Haïtien), West (Port-au-Prince), Southeast (Jacmel) and Southwestern (Cayes).
Many investors have answered the call and have demonstrated a certain interest for the tourism industry of Haiti. Recent hotel openings are proof of this: Royal Oasis in December 2012 in Petion-Ville, The Best Western in March 2013, located also at Pétion-Ville, and Marriott in February 2015, located in the heart of Port-au-Prince. Over the last three years, Haiti has seen an increase in arrivals. Statistics already show an increase of 20.3 per cent compared to 2012.