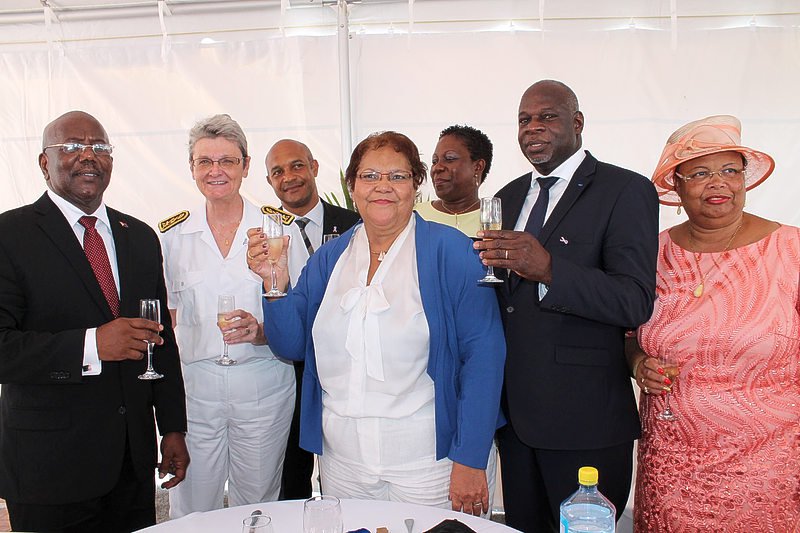 On the waterfront development, she said she was convinced St. Martin would become a high-quality tourism destination, the project “presenting hope for employment of the youth; 44 per cent of whom are out of work.”

She said much of the groundwork for the waterfront project had been completed and launch of the public bid for a private investor was “imminent.”

However, the optimism of talking about the future of Marigot was tempered by the reminder that the Constitutional Court has denied the Collectivité’s right to compensation for the transfer of competences in 2007, a loss of some 100 million euros that could have been invested in projects for the general interest. “But it does not mean the fight for compensation is over,” she insisted.

That was also confirmed in Member of Parliament (MP) Daniel Gibbs’ short speech in which he said he would restart the negotiation for compensation in Paris on September 6, inviting Hanson and Senator Guillaume Arnell to join him.

On the Organic Law, Hanson said four articles were in the process of being re-written on at least four subjects concerning organisation of State services, finances of the Collectivité and other points. These will be presented to the ad hoc committee before passing to the Territorial Council for a vote.

Hanson and Arnell both mentioned the two homicides this week in their speeches and expressed their condolences to the victims’ families, but the topic did not overshadow the spirit of the Bastille Day celebration.

“We must watch out for each other, we must be careful and try to protect ourselves and our country,” Hanson said.

She said the Territorial Police had just finished a training course on use of weapons, given by Centre National de la Fonction Publique Territoriale (CNFPT) at the shooting centre in Anse Marcel.

In addition the territorial analysis on security is due to be completed at the end of this month.

Arnell said in his remarks that the terrorist attacks against France and attacks against the fundamental values of the nation “must never prevent us from fighting all forms of intolerance. I urge you to continue to seek peace, brotherhood and freedom for all, to be more tolerant with each other while protecting and defending our culture and heritage.”

He also congratulated all the successful Baccalaureate students, their teachers and parents, and congratulated the youth cycling teams, the clubs and cycling committee for the great job they are doing with the youth.

As usual on this occasion, government dignitaries from St. Maarten and Anguilla were present for the official ceremonies. In the delegation from the Dutch side was Christopher Johnson, representative of the Netherlands government in St. Maarten.

Ceremonies began with a church service and laying of wreaths in the garden of Hotel de la Collectivité, followed by the parade of troupes on Boulevard de France. In the procession were Gendarmes, firemen, Scouts and Guides of France, Senior Scouts of St. Martin, Grain D’Or dancers and Generation New Status Drum Band.

Following the official ceremony, traditional boat racing, cycling and running races took place for the rest of the day, with a packed programme of musical entertainment and fireworks on the waterfront.