Home Local News Hanson: ‘We succeeded in stabilising the territory, financially and politically’ 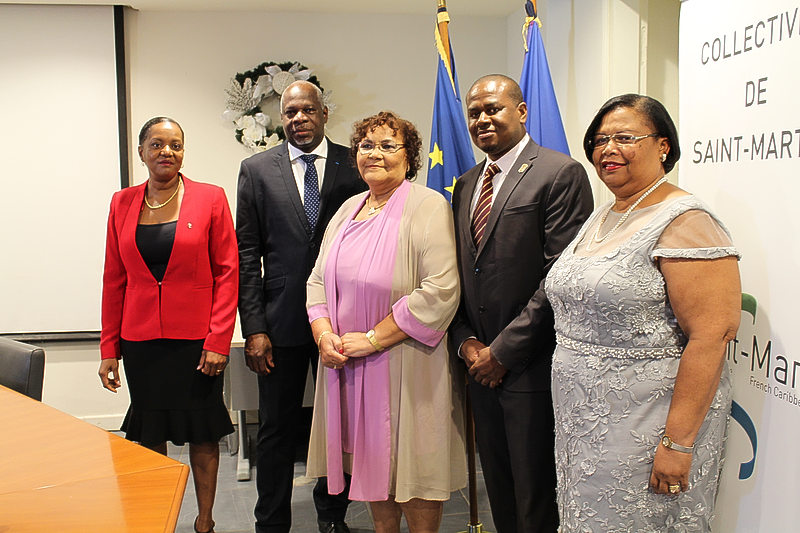 MARIGOT–President of the Territorial Council Aline Hanson delivered her traditional New Year address in the company of her four Vice-Presidents in Hotel de la Collectivité on Friday.

As is customary, representatives from all the main institutions of the Collectivité were present: health, justice, education, clergy, district councils, Chamber of Commerce, Economic Advisory Council, Gendarmerie, Territorial Police, State civil servants, the business community and so forth.

Of note was the presence of Dutch-side Minister of Justice Raphael Boasman deputising for William Marlin who was with a delegation in Anguilla to attend the funeral of Anguilla’s late first Chief Minister James Ronald Webster.

Unusually only a few of the Councillors from the majority were present, but there was no Opposition party or Independent Councillor Jules Charville in the hall. The reason for that was unknown, but the Collectivité insisted all elected officials had been invited.

Hanson began her address by saying she had unexpectedly fallen into the role of President in April 2013 on Alain Richardson’s resignation, but assumed her responsibilities “conscientiously and with determination.”

“During the past four years I have always favoured collective action, listening and dialogue that enabled us to move forward.”

She went on to talk of the Collectivité’s achievements.

“When I took over the finances were in the red, but I can tell you the situation is much better now than five years ago. Tax revenues went from 51M euros in 2012 to 100M euros in 2016 without any extra burden as we did not change the rates. We focused our efforts on collecting tax and it worked.

“We extended until 2020 incentives for investment aid. These measures allow St. Martiners to finance their principle residence or rental investment. We took important tax measures to increase the attractiveness of the territory for investors.

“We voted a measure to free up land for investing and we allowed parents to pass on their estates to their children without paying tax.”

“As I speak the Collectivité is up to date with its payments. The only downside is the debt of 48M euros to Caisse Allocation Familiale (CAF), but we will soon see the light at the end of the tunnel. Negotiations are continuing with the Elysée Palace and the Ministeries. We have, however, received aid of 4.6M euros from a relief fund and we have been able to obtain 10M euros in tax revenue that was unjustly collected by the State in 2008 and 2009.

“On fighting for a fair compensation for the transfer of competences I initiated the question of constitutional priority on the matter, but the Constitutional Court ruled it normal that the Collectivité should begin its existence with a structural deficit of 12M euros per year. We have no choice but to deal with this situation.

“Last year our operating surplus was 17M euros which was used to finance investments to benefit the population such as public lighting (2.3M), road improvements (2.5M), renovation of sports facilities and stadiums (6M).”

“An annex (chambre detachée) of the Court of First Instance in Basse Terre is presently under construction in the former library behind the courthouse. With the extra human resources to come with it, this is a significant step forward for the territory and its inhabitants. The Collectivité has also chosen to make premises available for an association to aid victims.”

“The partnership agreement between Gendarmerie and Territorial Police has helped to improve the exchange of information, joint patrols, training and more. The number of police officers has increased and they followed training courses in 2016.

“Our video surveillance protection system has also been strengthened and we now have 60 cameras in urban areas. Our anti-delinquency department has also been effective in working with parents and the youth.”

“This included the creation of a health observatory for St. Martin and St. Maarten, joint actions in education with Anguilla and St. Maarten, and developing links with our Caribbean neighbours [Haiti, Dominican Republic, and other territories – Ed.].

“St. Martin became a member of the Association of Caribbean States (ACS) on June 2, 2016, in Havana, Cuba. St. Martin can now participate in the political thinking of the ACS in areas as diverse as trade, tourism, sustainable development, protection against natural disasters.

“Membership of the Organisation of Eastern Caribbean States (OECS) will also give us ways to take action on a regional level.

“Regarding cooperation with St. Maarten, I hope that the projects that we initiated in the context of the first European cross-border development plan can come to fruition on time. I know I can count on Prime Minister William Marlin to make these projects a reality for our two territories.”

“The Collectivité has worked with National Education to adapt to the needs of the territory. Bilingual classes were created in the first degree, we initiated the teaching of tourism in college classes, and the Cité Scolaire has brought relief to the overcrowding of the other establishments in Marigot and spread employment, and redeployed staff from the second degree. This 20M euro project gave work to many local contractors.

“With regard to a school of excellence, we created in November 2016 a diploma course in hotel, restaurants and tourism studies available in three languages. This is a significant step forward for the development of post-Baccalaureate courses.”

“We have focused our efforts on employability and training of young persons without qualifications to give them the means to get a job. This applies mostly to the 16 to 25 age group and we have relied on holding skills training and apprenticeship courses with the help of European Social Funds and training centers.

“The 2015/16 professional training programme presented 27 training activities for some 300 persons. A further115 young people will start jobs in the future via 30 partner associations.”

“Director of Accueil, Information et Orientation (AIO) Corinne Pineau plays a leading role in the social and professional integration of young people. The Regiment of Military Adapted Training (RSMA) from Guadeloupe has trained 190 young people between 2015 and today. The partnership with the Army and Air Force has opened up many opportunities for employment.

“This year AIO will become a Local Mission, the last one in France. The first stone for this future building was laid on October 31, 2016, by Labour Minister Myriam El Khomri.”

In wrapping up her address Hanson said: “We have no reason to be ashamed of our achievements. Five years is a short time to complete a full political agenda, but I know the population is able to objectively measure and appreciate the overall outcome.

“For the first time in the history of the Collectivité we have succeeded in stabilising the territory financially and politically. This New Year address is an opportunity for me to encourage those who believe in the potential of St. Martin, those who act in a constructive manner.”

Earlier, the four Vice-Presidents each gave detailed accounts of their accomplishments in 2016 based on their portfolios.