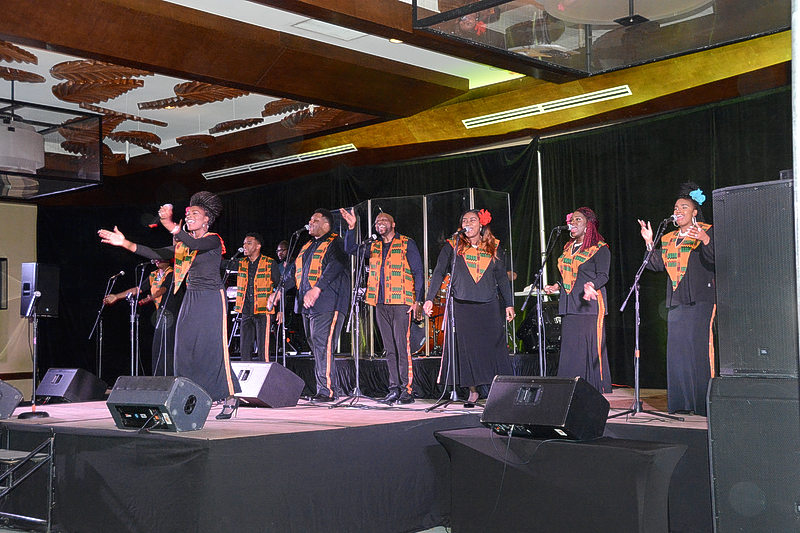 DAWN BEACH–The Harlem Gospel Choir serenaded audience members at The Westin St. Maarten Dawn Beach Resort and Spa on Sunday. The concert was a mix of contemporary gospel as performed in the black churches in Harlem, New York, USA, today, as well as a couple of secular songs that have been made famous by musicians who grew up in these churches.

The Choir was invited to perform in St. Maarten by promoter François Bonnet. This was the choir’s first time performing on the island.

The Harlem Gospel Choir was founded in 1986 and has risen to prominence as the United States’ most internationally renowned performers of gospel music. Audience members enjoyed the show and gave a standing ovation at its end.

Based in New York, the choir traces its musical roots to the African-American slave trade, peppering its renditions of black gospel music with touches of blues and jazz. The group’s performances are characterised by joyous singing and dancing, and seek to present modern gospel classics as they are performed in the churches of Harlem today.

The Harlem Gospel Choir has occupied stages across the globe alongside personalities such as Bono, Diana Ross, Sir Keith Richards, Whoopi Goldberg, Trace Adkins, Lyle Lovett, Jordan Smith, Andre Rieu and The Gorillaz. It has performed for a number of distinguished figures, including Pope Benedict XVI, Pope John Paul II, and US Presidents Jimmy Carter and Barack Obama.